by Joseph Flynt
Posted on September 11, 2013
17 Shares
3D Insider is ad supported and earns money from clicks and other ways. 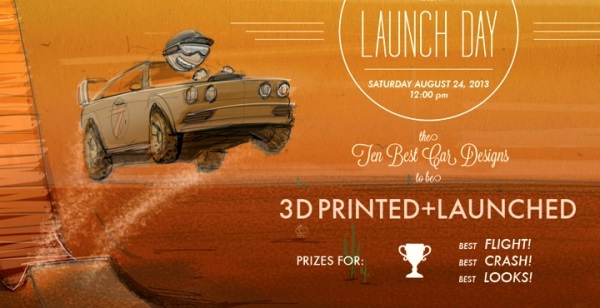 In July, the Industrial Designers Society of America (IDSA) created a design contest that invited designers from all over the world to come and design a 3D printed car to launch down a ski-slope track at the conference in Chicago. The Launch Day 2013 Competition was hosted by Inventables.

The event drew over 100 entries from all over the world but only the top 10 cars were selected to go down the ski jump. First, Second and Third was decided by the farthest distance a car went, most spectacular crash and the most beautiful design. The top three contestants would win themselves a 3D printer from Inventables.

First place went to the Ballona car which travelled the furthest distance. It was designed by Reut Kovetz of Fahrenheit Design in Austin, Texas and it was created to break into a bunch of little pieces when it hit ground. The success of Kovetz’s design was the sphercial balls that kept on rolling after it broke apart.

The award for the best appearance and crash went to Priority Designs Donkey Kong Derby Car. It was designed as a barrel that would shatter when it hit the ground. Most of the components were created on a MakerBot Replicator 2 and attached with super glue.

Check out the video below to see the top ten contestants in action.