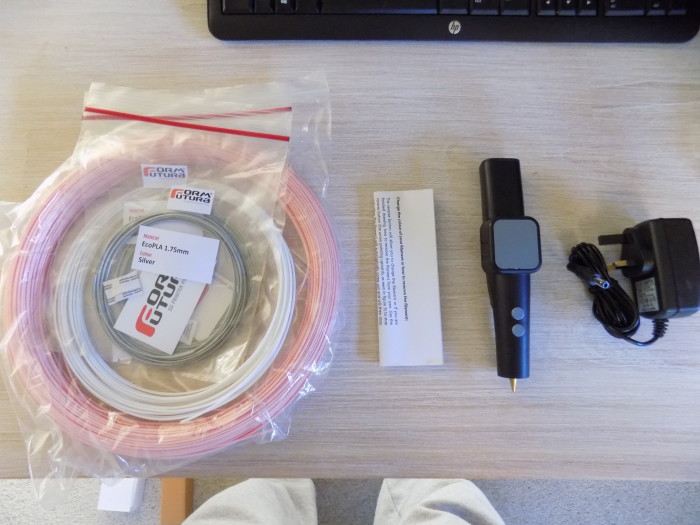 by Joseph Flynt
Posted on July 28, 2014
11 Shares
3D Insider is ad supported and earns money from clicks and other ways.

3D printing pens first came to the market with WobbleWorks’ 3Doodler, when it launched on Kickstarter last year. Since then we’ve seen a multitude of 3D printing pens released by different companies and here at 3dinsider.com, we managed to get our hands on iMakr’s variation.

Much like all the other printing pens, iMakr’s model seems to be more of a streamlined hot glue gun that melts plastic. Despite this, 3D printing pens open up 3D creation to a whole new raft of people who can’t afford or can’t operate complex 3D printers and 3D modelling programs. Much to our surprise, iMakr’s printing pen was recently taken off their online store; however we decided to make a general review of the technology that represents what we experienced while using the 3D printing pen.

Setting up the pen was easy enough plug it in, turn on the power and wait for the LED light to turn blue. Heating up the pen takes just under a minute, while leaving the pen on for around 15 minutes without extruding any filament would initiate a cooling mode.

Most 3D printing pens can take both ABS and PLA filament, and in our case we received a number of packs of PLA filament to try out with the pen. ABS plastic lends its self-better to prints in the air, while PLA sticks to surfaces slightly better and is more environmentally friendly. If you were printing for a long time we would certainly recommend printing with PLA, as ABS fumes are both more toxic and more offensive to the nose.

Inserting the filament into the pen is a relatively straightforward process and those who have used a 3D printer before will have no trouble setting it up. The plastic filament is inserted through a small slot at the top of the pen and is pushed in until it can’t go any further. Once you’ve done this, press the forward extrusion arrow while the pen is heated up to start the process. The plastic may take some time before it flows from the nozzle. Other printing pens like the 3Doodler use plastic sticks instead of standard filament, which can be bought on their online store.

Disappointment was the first word that came to mind when I initially tried printing with the pen. My first attempts were drawing simple 2D shapes on a canvas surface, which was simple enough; however when I tried to make 3D shapes I failed miserably. Remembering that PLA wasn’t the best for drawing 3D objects, I quickly changed to ABS plastic and found that I could make slightly more complex prints. A tip that I learned while using the pen was to reverse the filament slightly when wanting to stop. This eliminated any of the excess plastic strands and let me produce higher quality objects. 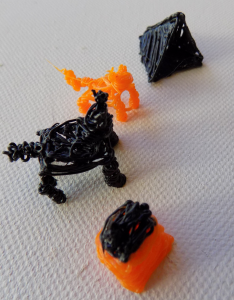 The problem with drawing in the air is trying to overcome the laws of gravity. Instead of taking your time drawing, it’s more of a race against time to stop the plastic from sagging while it hardens and dries. Some other printing pens have multiple extrusion settings that let you better manage print speed and temperature; however the one we used didn’t.

We believe the problem of sagging plastic was exasperated by iMakr’s use of 1.75mm filament. iMakr’s printing pen extruded plastic that was surprisingly thin and looked as though it would be better suited to printing on a proper 3D printer. Other pens such the 3Doodler use proprietary filament that appears to be slightly thicker than the 1.75mm filament the iMakr pen uses. Due to this we believe iMakr’s pen is slightly harder to use because the extruded strands sag and bend too easily, although using standard 1.75mm filament does make the pen cheaper to use than its competitors.

A couple of other issues we found with the pen were the placement of the buttons and how hot it got. Due to its bulk, we found that you had to reshuffle your hand when trying to go from the ‘extrude’ button to the ‘retract’ button. This was especially annoying when we were trying to make small, delicate objects. The location of the buttons near the nozzle also meant that after a number of minutes the plastic and ultimately your hand got uncomfortably warm, although it’s not a major issue.

It’s not all doom and gloom for 3D printing pens though. I found that the more time I spent using the pen, the easier it became. Instead of creating disfigured objects that barely represented the idea in my mind, I could draw more and more complicated shapes and objects every time I picked up the pen. Experience seems to be the key when using the pen and we know it can make some amazing creations (Matthew Butchard’s RC plane for example).

So are 3D printing pens worth it and more specifically iMakr’s pen? Well, that really depends entirely on you. We had a number of different people try out the pen and most put it down after a matter of minutes due to their inability to create 3D objects with the pen. However those with a bit of patience and determination will be able to create some amazing objects and I found that the more time I spent with the pen, the easier 3D creation became. Here at 3D Printer Plans we believe that 3D printing pens add something new and unique to the 3D printing community. Those with a creative mind will find printing pens great fun, just don’t expect to make a rocket ship first time around.