by Joseph Flynt
Posted on May 12, 2018
13 Shares
3D Insider is ad supported and earns money from clicks, commissions from sales, and other ways.

Kickstarter is full of 3D printer projects that will never see daylight. Some campaigns have been stuck in limbo for years while others are simply too complicated to get any serious backers. But that doesn’t necessarily mean 3D printers on the popular crowdsourcing platform are always doomed to fail.

Believe it or not, there have been a few success stories in the past. This guide is about Kickstarter 3D printers that managed to get off the ground and actually went on to spawn a series of products, which you can buy today. Here are five 3D printers – or series of 3D printers, in one case – that prove Kickstarter isn’t 100 percent full of crap. 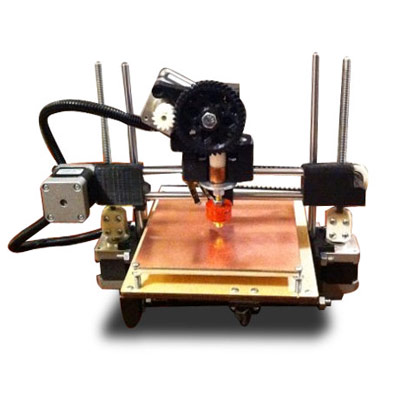 The original Printrbot is one of the most well-known projects to ever come out of Kickstarter. It’s also one of the most funded 3D printers on the platform, getting $830,827 in funding.

Like most of the other first-gen versions of the 3D printers listed here, the original Printrbot is no longer in production and has since been replaced by upgraded versions. One of the manufacturer’s current models is the Printrbot Simple Pro. It’s a lot more modern than the original Printrbot, featuring a touchscreen interface, a higher resolution, and a larger build volume.

The Simple Pro has a simple and compact design, giving it a smaller footprint than other 3D printers with a similar build volume. It actually looks way different than other products on the market. The Simple Pro is available in two configurations: the base model and the one equipped with a heated build plate.

If you want a cheaper option, there’s the Printrbot Play. It offers a semi-enclosed profile and a smaller build volume. It’s meant for beginners and kids and has a more rigid frame. But despite being designed for kids, the Play, or Model 1505, outperforms many other 3D printers in the same price range. 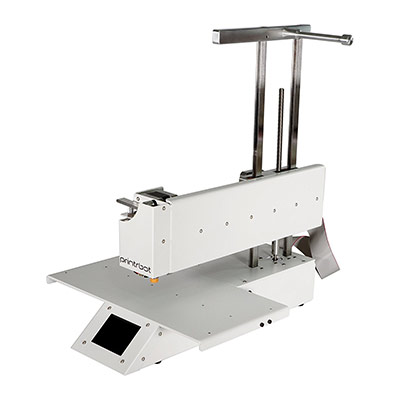 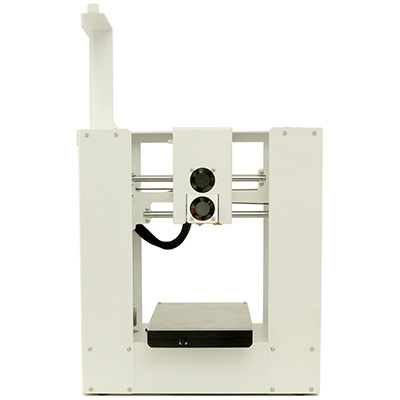 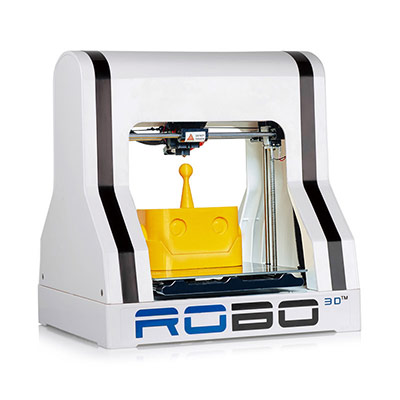 Created by a group of students from San Diego State University, the original R1 was first put up on Kickstarter in 2012, with a funding target of $49,000. It managed to convince over 1,000 backers, eventually ending its run with a cool $649,663.

The current version of the R1, the new R1+, is one of the best 3D printers under $500. It’s a semi-enclosed 3D printer with a rather odd design, which makes it stand out. It is fully assembled out of the box and is ready to go in less than one hour. It is much larger than other products in the same class, boasting a generous build volume that can easily accommodate more complex 3D models.

The R1+ is equipped with an all-metal hot end and a heated build plate. The latter allows you to print with different types of materials. However, since the R1+ lacks a full enclosure, you may not be able to produce consistent results with certain materials.

A recommended 3D printer for beginners, the R1+ has good print quality and doesn’t require a lot of maintenance in between print jobs. It is easy to use and has an open filament system, which means you can print with filaments sold by different third-party vendors.

Now here’s the bad news: the R1+ will soon be completely obsolete. Robo 3D is now focused on the R2 and the C2, the big brothers of the R1+. The two products had their own joint campaign on Kickstarter, which got $382,027 in funding. Of the two, the R2 is the better product. It’s one of the best 3D printers you can get in the $1,500 range.

The R2 is fully enclosed on all sides except at the top. It has a touchscreen interface that includes an onboard slicer and comes with an integrated camera which, combined with the R2’s Wi-Fi connectivity, allows for remote print monitoring. The C2 is basically the cheaper and more compact version of the R2, with a smaller build size and fewer features. If you can’t afford the R2 but want a more futureproof 3D printer than the R1+, go for the C2. 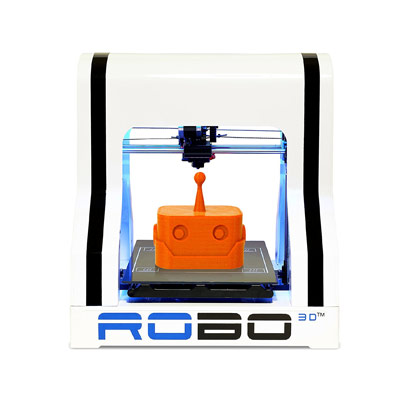 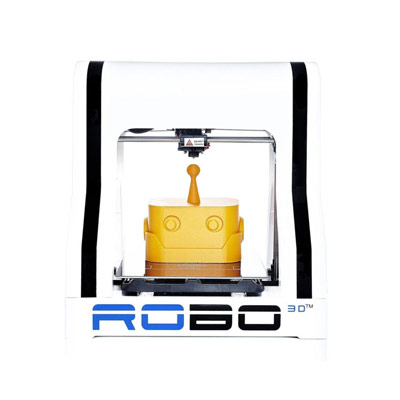 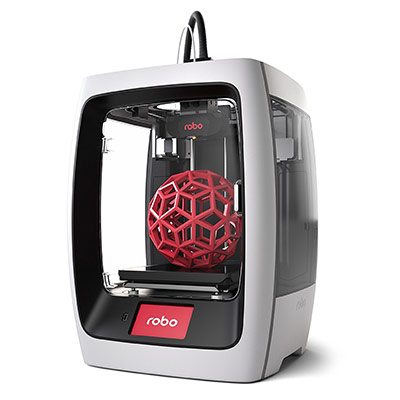 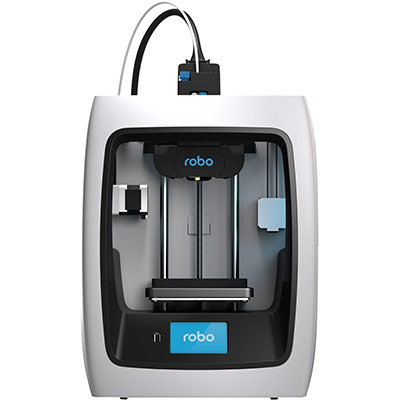 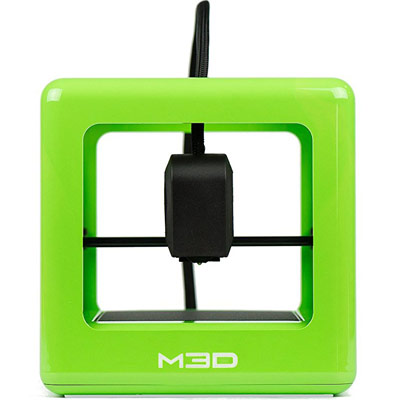 The Micro by M3D proves that not all good things come in large packages. It received $3,401,361 in funding on Kickstarter, which is an insane number considering its limitations.

Compact and lightweight, the Micro is a semi-enclosed 3D printer that boasts a very minimalist design. It does not have an LCD or touchscreen interface and lacks an external spool holder, which is usually located on the side or at the back. Instead, the Micro’s spool holder is underneath the print bed, which means it has a limited capacity and will not fit most filament spools.

The Micro is basically a plug-and-play 3D printer. It arrives assembled and requires minimal tinkering before you can start your first print. It’s definitely designed with customer convenience in mind. However, the Micro isn’t for everyone. It is very limited in what it can do, so it’s not a recommended product for hobbyists and enthusiasts who want to print complex objects.

First, the Micro has a tiny build plate, which means you are severely limited in what you can print. Complex and functional objects are pretty much out of the picture. Second, the Micro lacks a heated build plate, which limits it to PLA, the most common material type. This means you can’t print with ABS and other materials that need an enclosure and consistent temperatures.

In addition, the Micro’s print speed is really slow. It’s bad enough that you can only print small items. What makes it worse is that said small items still take a while to finish. So, in summary, only buy the Micro if you want a low-cost, compact 3D printer that would look great on your work desk. 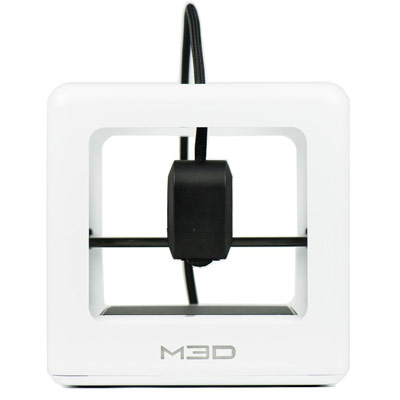 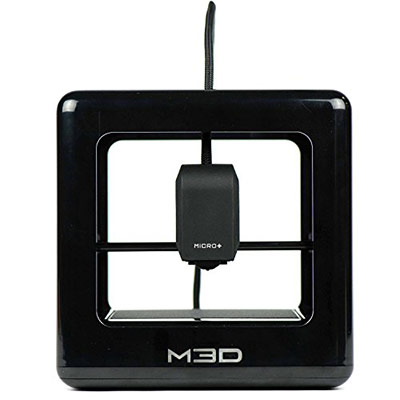 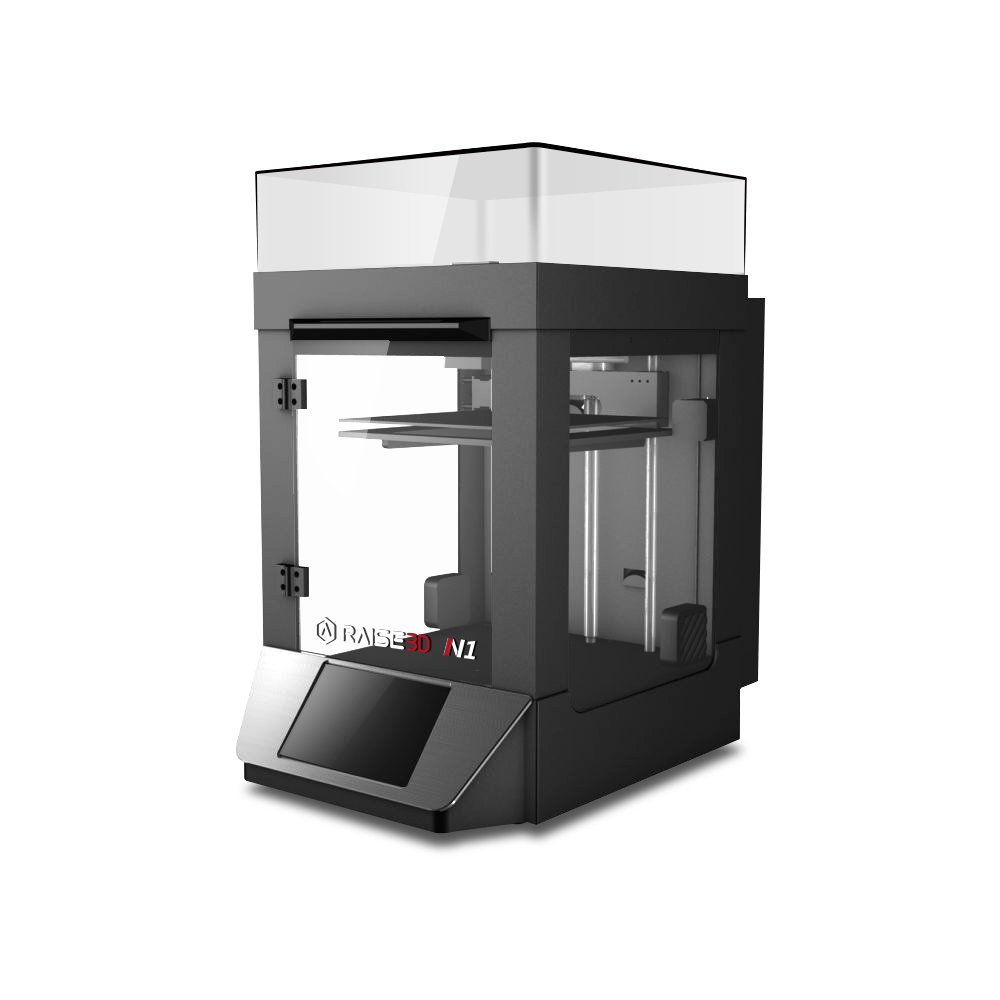 The N-Series from Raise3D is a trio of 3D printers that are built like a tank. They are all made of sturdy aluminum frames and are fully enclosed on all sides. The N-Series had a 30-day funding period on Kickstarter, earning $445,892 in funding (the goal was $50,000).

The N-Series is composed of the N1, the N2, and the N2 Plus, the latter of which is one of the largest 3D printers you can buy today. The three have very similar specs, actually. All three have heated build plates, the ability to print with different types of materials, and the option for both a single extruder setup and a dual extruder setup. They are also on the expensive side, so they’re not exactly the most accessible 3D printers for everyone.

If you have the money and can easily afford any of the three, we recommend going for the N2 Plus, the largest of the three. There are better 3D printers that offer nearly the same build size as the N1 and the N2, but there aren’t many that come close to the N2 Plus’s massive build volume.

But the N2 Plus’s build volume isn’t the only thing you’ll love about it. For a massive machine, the N2 Plus is surprisingly very easy to set up right out the box. You don’t need to spend hours tinkering with it in order to start your first print. It’s also a reliable workhorse once you have it tuned-up to optimum settings. It can print non-stop for days with minimal issues and can produce highly detailed 3D models that will easily impress you.

Though not as popular as the original Printrbot and the Micro, the N-Series is certainly worth the look if you’re in the market for a large, sturdy 3D printer that can also produce excellent results. The N2 Plus, in particular, is one of the best 3D printers you can get if you have a $5,000 budget. 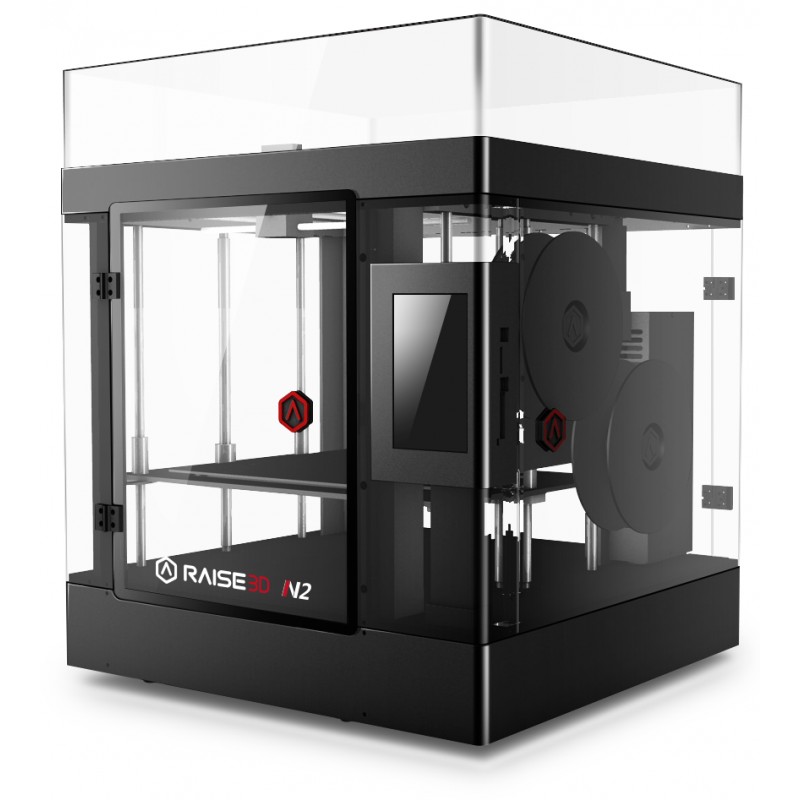 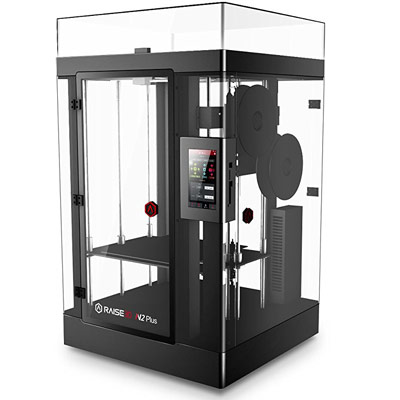 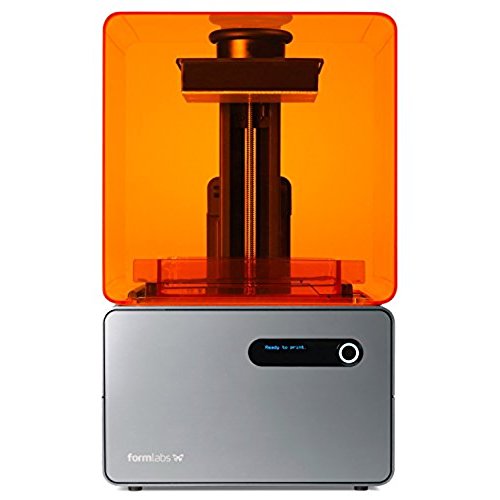 But the thing about SLA 3D printers is that they are extremely expensive. That changed when Max Lobovsky, David Cranor, and Natan Linder – the founders of Formlabs – created the Form 1, an SLA 3D printer that most professionals can easily afford at the time. The Form 1 got an eye-popping $2,945,885 in funding on Kickstarter, making it one of the most funded 3D printers on the crowdsourcing platform.

The first-gen Form 1 is no longer available and has since been replaced by the Form 1+, which was released in 2014, two years after the Form 1’s successful campaign on Kickstarter. The Form 1+ includes improvements across the board, including better print speed and print quality. It’s more consistent and has a more straightforward setup.

The Form 1+ is more expensive than the Form 1, obviously, but there aren’t many 3D printers in the same price range that can offer what it brings to the table. The Form 1+ is joined in the market by the Form 2. The Form 2 offers even better improvements, most notably it’s got a larger build volume, which is a huge thing considering SLA 3D printers normally have limited build volumes.

With the Form 1, Formlabs proved that SLA 3D printers can also be accessible to mere mortals, not just to people with extremely loaded wallets. It is one of the best and most significant 3D printers that came out of Kickstarter. 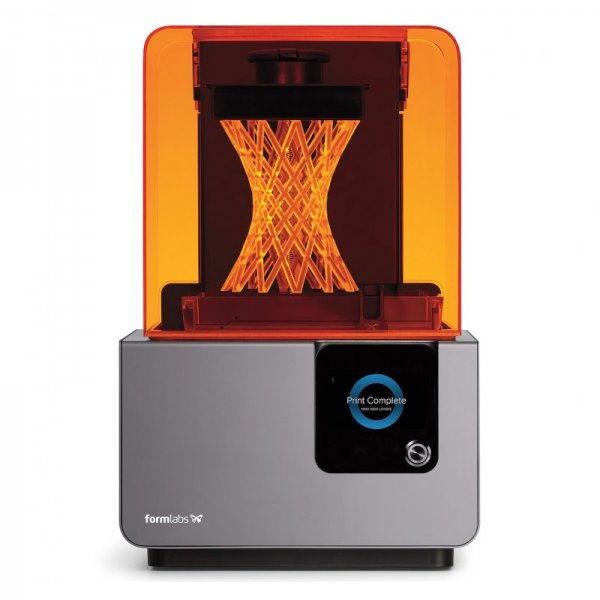 How to Spot a Scam on Kickstarter

Hearing about the success stories on Kickstarter probably got you interested in helping out some of the existing 3D printer projects on the site. No harm in that. Who knows, maybe you’ll hit the jackpot and get to be a part of something big that might change the 3D printing industry? Here are a few tips on how you can determine whether a project has potential and is worth investing into.