by Joseph Flynt
Posted on October 28, 2022
17 Shares
3D Insider is ad supported and earns money from clicks, commissions from sales, and other ways.

There is a seemingly endless stream of crowdfunded 3D printer projects nowadays. One of the latest to come out of the woodwork is the KOKONI 3D printer. Among its features, the most compelling would be the ability to generate 3D models on a phone and send them directly for 3D printing.

As with all crowdfunded projects, applying a healthy amount of skepticism is recommended for the KOKONI 3D printer. What exactly does the project promise and what is its current state? How realistic are its claims? Is this a project worth supporting?

What is the KOKONI 3D printer? 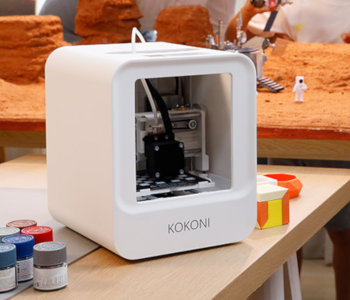 The KOKONI 3D printer is a 3D printer that is being developed through crowdfunding on the Indiegogo platform. The company behind KOKONI is Moxin Technology Co. Ltd., based in the Zhejiang Province in China.

The 3D printer comes fully assembled and is a plug-and-play model. From the images and videos available on the crowdfunding page, the KOKONI 3D printer seems to come with an integrated rigid frame, removable build plate, and filament spool holder located at the rear side of the printer.

The selling point of the KOKONI 3D printer is that its developers claim that it is the first 3D printer to come with “Instant AI 3D modeling.” The demonstration videos show the ability to make 3D models using your phone and send the models directly to the 3D printer. This definitely sounds like it could appeal to an unfulfilled market niche, although the technology to generate 3D models with camera phones isn’t exactly new.

The project has been funded well beyond the target set by the developers. The crowdfunding page indicates that the first batch of printers has already been manufactured and is being shipped to the backers.

What are the promised features of KOKONI?

The key feature of the KOKONI is its ability to interface with a mobile app directly to print AI-generated 3D models. Modeling via the companion app can be done in two ways.

The first method is called “3D Avatar Modeling.” The purpose of this method is to create mini 3D busts using just a single front-facing photo of a person. According to KOKONI, this method is based on deep learning technology that has been “trained” with lots of sample data to understand the appearance of a 3D object in the real world.

The algorithm will automatically fill in the missing details to create a 3D model using just a single photo as the basis. There will inevitably be some errors with this method, but it’s great for doing some quick prints.

The second method, called “Object Modeling,” is more similar to traditional photogrammetry. Several photos are taken of a single object from different angles. These are then stitched together via a stereogram-based algorithm. Theoretically, the Object Modeling method should generate more geometrically accurate models. 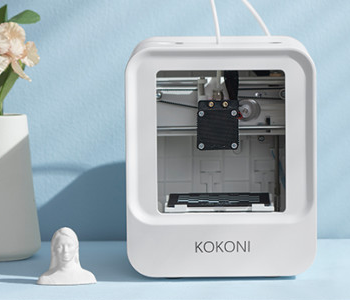 KOKONI describes the 3D printer as “maintenance-free.” It’s not exactly clear how the 3D printer will live up to this claim aside from the fact that it requires no assembly and that it has an auto-bed leveling feature. Other maintenance activities like the lubrication of gears and tensioning of belts likely cannot be avoided.

KOKONI claims that their 3D printer emits noise only at the level of 30 dB. If true, this is massively impressive, as that sound level is quieter than a normal conversation. A quiet 3D printer would be ideal for home use, especially if you’re planning to use it in an indoor office or bedroom. This is a claim that definitely needs to be tested.

The KOKONI 3D printer is designed specifically to print only using PLA filament. KOKONI actually recommends using the brand’s own line of PLA filaments for best results and to prevent clogging the printer’s nozzles. Other PLA brands are also compatible.

Being able to print only with PLA definitely restricts the applications of the KOKONI 3D printer. PLA is an extremely easy material to work with, but it’s not known for being robust against external forces or extreme conditions. This does imply that 3D printing in the KOKONI printer is best for display pieces or visual prototypes.

From the photos and videos that KOKONI has released, the 3D printer appears to have a minimalist and elegant design that would fit right in a modern household. The outer frame does a good job of concealing many of the printer’s moving parts to make the machine look cleaner. How functional the design remains to be seen in terms of being able to access the printer’s internal components for maintenance or troubleshooting.

The current state of the project

As of the writing of this article, the project was able to raise 1185% of its target funds. With a hugely successful crowdfunding campaign, production of the printers has started and some of them are already being shipped to the backers.

There is no feedback yet from users who have had hands-on experience with the KOKONI 3D printer. We can probably expect detailed reviews of this printer in the coming months.

Should you get the KOKONI 3D printer? 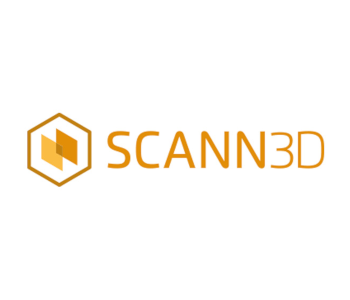 At this point, there is nothing to lose in waiting a few more months to wait for actual user feedback on the KOKONI 3D printer. While the AI-aided 3D modeling is a nice perk, it really is more of an add-on novelty. The more important factor to consider would be the performance of the 3D printer in terms of reliability, detail precision, and ease of use.

Although the 3D modeling feature of the KOKONI 3D printer is its primary selling point, it is actually quite irrelevant to the assessment of the printer’s quality. 3D modeling via smartphone app is nothing new – there are already a few apps that are capable of this.

It is a promising sign that the 3D printer was able to quickly move into production and shipment once the funding target was met. This is not the case for a majority of crowdfunded 3D printer projects. Some of them take years to move to production if the projects even progress at all.

At this point, we still recommend applying some skepticism before getting the KOKONI 3D printer. Crowdfunded projects tend to over-promise and under-deliver, especially when they come from relatively new developers. It would be great to be pleasantly surprised, though. There is definitely still an unfulfilled market for highly compact and user-friendly 3D printers.

The KOKONI 3D printer is a crowdfunded 3D printer project whose main gimmick is that it can seamlessly print 3D models generated via an AI-aided smartphone app. This does make the 3D printer stand out, even if it’s not new technology. We can imagine how fun it would be to print 3D avatars of your friends, family, and pets without the need for advanced 3D modeling skills.

Despite some good promises, it is always very risky to back crowdfunded projects. Fortunately, the funding period for the KOKONI 3D printer has already passed and they are now manufacturing and shipping the units. At this point, it’s wise to wait a bit before jumping the gun. Feedback from the early adopters should start popping up online within the next few months.