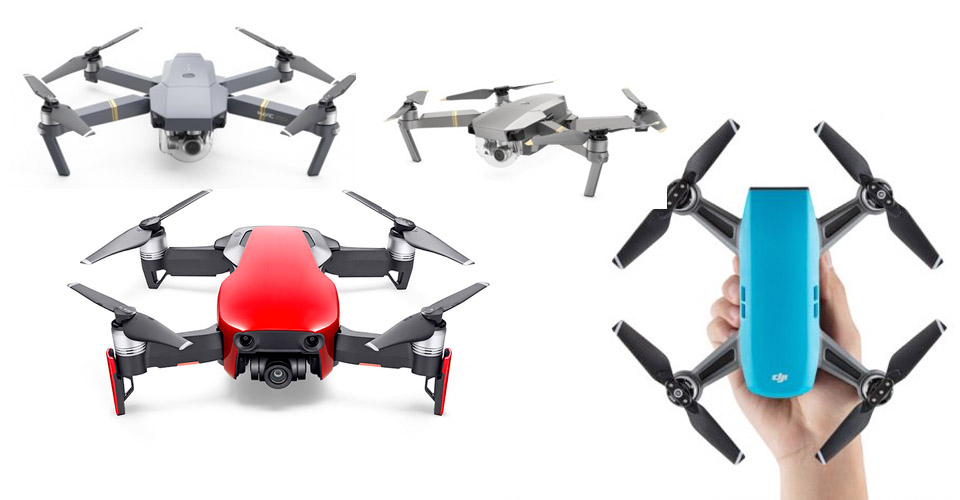 by Joseph Flynt
Posted on January 24, 2018
15 Shares
3D Insider is ad supported and earns money from clicks, commissions from sales, and other ways.
DJI has just released the Mavic Air 2. See all of the specs here.

The DJI Spark and Mavic Pro are among the most popular drones around. However, the arrival of the Mavic Air has really stirred things up. This machine boasts a range of new capabilities, but will it actually live up to the hype? We have thoroughly compared the specs and features of each drone to determine which one you should buy.

Possibly the number 1 reason to get a drone is to shoot awesome aerial videos. That’s why a drone’s camera is important. All of these drones can film in HD. However, the Mavic Pro and Mavic Air greatly surpass the Spark. They can film in 4K (ultra-high definition) at 30 frames per second. The Spark can only film in 1080p which is noticeably lower quality.

It’s not just video that you will want to record from the skies. Don’t forget about still photos as well. All of the drones have a 12-megapixel camera, so we have a tie in this category.

Have a look below to see what’s under the hood. Remember these figures are maximums that can only be reached in ideal wind conditions.

The Mavic Air comes in first place with a top speed of 42mph. Slightly behind are the Mavic Pro models, with the Spark coming in a distant last place.

The max flight time is how long a drone can stay airborne before its battery runs. Obviously, wind conditions, flight speed, operating modes and a variety of other factors can affect this.

A drone’s flight range is how far it can travel from its controller before it loses connection. Just keep in mind that these figures are maximums. It’s likely that the drone won’t be able to reach this distance due to interference. Also, the further the drone flies from its controller the greater the likelihood of connection dropouts.

If flying super long distances is important to you, then the Mavic Pro is the best option.

The lighter a drone is, the easier it is to transport. The good thing is that all these drones are less than 1kg and will hardly weigh you down at all. The approximate weights are:

The Spark is even smaller than the Mavic Air. However, you can’t fold the Spark. What this means is that the Mavic Air is bigger when unfolded but smaller when folded.

Overall it is a tie between the Spark and the Mavic Air. Both are small, light, and easy to transport.

The Spark and Mavic Pro models have some pretty nifty obstacle avoidance technology. Frontward-facing sensors allow them to detect walls, tree branches, chain-link fences and a variety of other obstacles. In the case of user error, these sensors will stop the drone automatically to prevent a collision.

The Mavic Air takes things to the next level. It has an improved system that can detect multiple objects at once as long as they are not more than 20 meters away. The drone’s sensors also enable it to recalculate its route so that it can fly around obstacles, rather than just stop in place. Lastly, it has rear obstacle sensors as well. Rear obstacle sensors are a game changer because the weakness of the Mavic Pro is that it’s easy to back into things.

Not a lot of differences here. Each drone makes use of both GPS and GLONASS positioning. This allows them to connect to an array of American and Russian satellites.

The drones also feature downwards facing vision-positioning systems. This allows them to use a range of sensors (both camera and ultrasonic) to accurately calculate their position when low to the ground. This increases safety when hovering or flying at low altitudes.

This category is a tie.

The Spark can be flown entirely with hand gestures and while this is a cool feature you really need to use a controller to get the full benefits. A controller increases its control range from 100m up to 1.2 miles. It also allows the drone to enter sport mode so that it can hit its top speed of 31mph.

The Spark controller is designed to be small, portable, and easy to use. Two control sticks make it easy to steer the drone. There is also a mount to attach a tablet or smartphone so that you can use the DJI App. Overall the controller is very ergonomic and user-friendly.

The Mavic Pro models have a similar controller to the Spark. The main difference is that their controller has a built-in LCD screen to display flight data. However, this is just a small screen that only tells you what mode the drone is in and how fast it’s going. You will still want to attach a smartphone or tablet to the controller’s mount so that you can take advantage of all the features included in the DJI App.

The Mavic Air has a similar controller to that of the Spark (which isn’t a bad thing). The overall design is the same, and there is a mount for attaching a tablet or smartphone.

Overall it’s hard to pick a winner as all the drones have similar, user-friendly controllers.

Each drone makes use of DJI’s intelligent flight modes. These are operated by using the DJI App. The main modes include:

The Mavic Air includes some new modes such as:

While the Mavic Air’s new modes sound cool, it remains to be seen how functional they will be.

Overall we don’t feel that there is an overall winner in this category. Each drone has a variety of flight modes that give users a lot of options for taking high-quality aerial footage from an array of different angles.

Let’s look at the approximate cost of each drone. To see the latest prices check Amazon yourself.

You will also see that there is a variety of bundle options on Amazon. These generally cost a few hundred dollars extra and contain an array of accessories, such as backpacks and spare connection cables. A lot of these accessories are a bit superfluous. However, if you are interested in a bundle option then try and get one with an extra battery and a charging hub. This will allow you to effectively double a drone’s flight time by landing it, replacing the dead battery with a full one, and then taking off again. The charging hub will also make it easy to charge both batteries at once.

The winner of this category is the affordable Spark.

Check out the overall scores below. As you can see the Mavic Air wins out in the most categories followed by the Mavic Pro Platinum.

Which Is Best Overall?

While both drones are very portable, the Mavic Air is the smallest (basically the size of a smartphone). It is also 2mph faster. However, this isn’t really that important.

Overall we reckon the Mavic Pro Platinum just inches past the Mavic Air to come in first overall.

The Mavic Air is clearly the best value for money. It’s cheaper than the Mavic Pro and Mavic Pro Platinum while still being an awesome drone. You will be getting a powerful camera, high-tech obstacle avoidance systems, and a high top speed. Don’t forget about portability. The drone is lightweight, and you can fold it down to the size of a smartphone and fit it in your pocket. The only let downs are the shorter range and flight time.