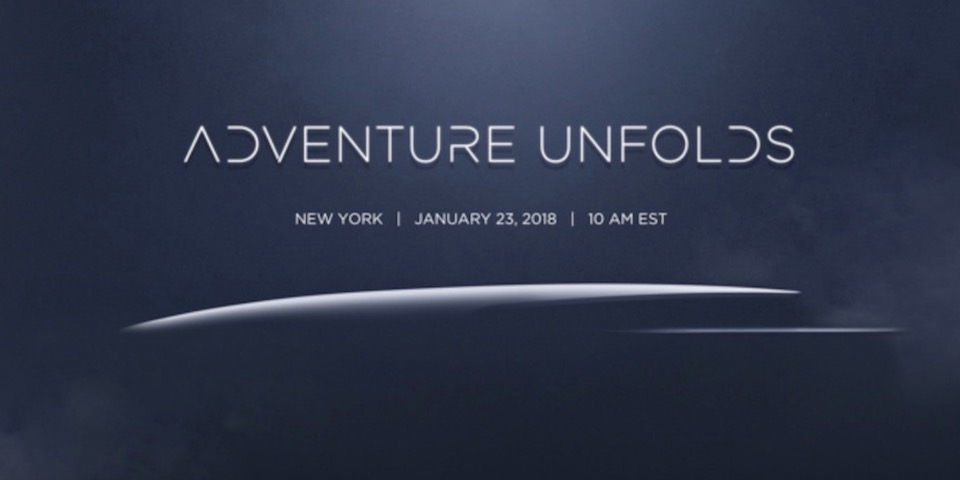 Mavic Air: DJI Rumored to be Releasing a New Drone

by Joseph Flynt
Posted on January 13, 2018
40 Shares
3D Insider is ad supported and earns money from clicks and other ways.
DJI has just released the Mavic Air 2. See all of the specs here.

DJI is rumored to be launching a new drone at 10 am on January 23rd at an event in New York City. It’s unclear what will be announced but from the photo that DJI released it looks like it could be the profile of a new drone.

DJI has released new drones at CES in Las Vegas before. CES 2018 has come and gone but no new drones were released. DJI announced two new products at CES. An all new Ronin-S stabilizer for DSLR cameras was demonstrated as well as a new DJI Osmo Mobile 2 to help people get clearer mobile phone footage.

Since no new drones were announced at CES, it’s more likely that January 23 will be the big reveal. The name of the event, “Adventure Unfolds”, is likely a play on words for a new portable drone.

The biggest rumor by far is that DJI will be announcing a new Mavic Air drone. At $1000, the Mavic Pro is not cheap. There’s plenty of room for a new drone between the $399 Spark and the much more expensive Mavic Pro. A new drone around $600 would likely open a new market for the company.

The rumor for a new Mavic Air started in a discussion on Mavic Pilots:

The guys there seemed straight from DJI as one could barely speak English.
Not sure if the other guy was trolling or not but he couldn’t help but share information about 2 new DJI models “coming soon”.
A “Mavic Air” smaller than the current Mavic but still with folding arms and a “toy” model smaller than the Spark which does flips.

Part of the prediction has come true as a new drone using DJI parts called the Tello was launched. It’s a small toy drone that does indeed do flips. It appears that he may have been onto something.

DJI has also deleted a forum section that was asking about the Mavic Air on their site. This makes it even more likely that this is what we will see announced. Finally, a YouTube video surfaced of the Mavic Air as a commercial was apparently being shot for it in Bali. The video suddenly disappeared and no one has a copy of it. Other DJI commercials have been shot in Bali before.

The Mavic Air is expected to be significantly smaller and faster than the Mavic Pro. No information on the specs is currently known. It’s unclear where the Mavic Air will put the Spark. The Spark will likely remain an intro-level drone with less advanced features. This likely means that we will see fewer features in the DJI Spark 2, since DJI will want to push consumers to get the more expensive Mavic Air.

Update: The release of the Mavic Air is looking more likely. You can live stream the event at DJI’s website. They have released a teaser video of what looks like the Mavic Air. You can make out the sharp features of a new drone model in some of the shots.

Joseph Flynt
I love diving into the latest and greatest in emerging technologies and seeing what they can do. I enjoy running when I'm not thinking about tech.
5 comments
Share now:
40 Shares
YOU MAY ALSO LIKE
SEE MORE