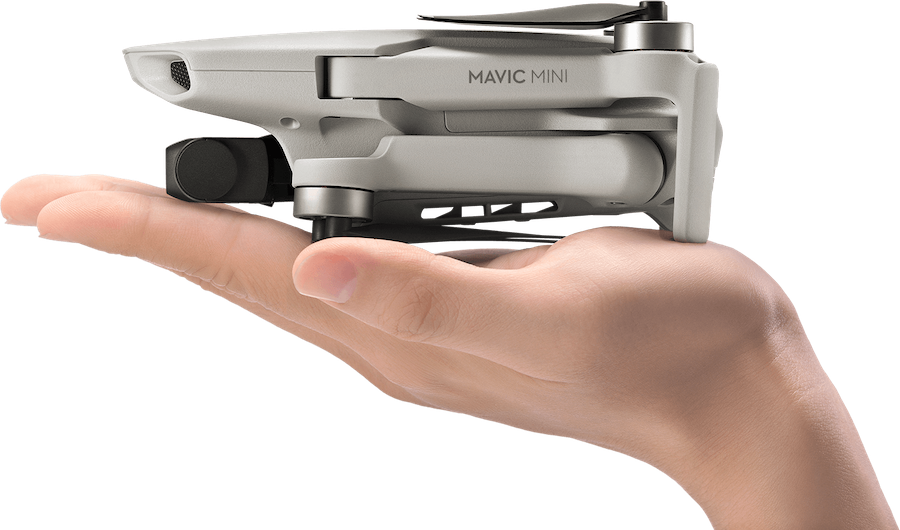 Mavic Mini Review – Should You Get It This Holiday Season?

by Joseph Flynt
Posted on November 7, 2019
23 Shares
3D Insider is ad supported and earns money from clicks, commissions from sales, and other ways.

Rumors about the newest ultra-portable drone from DJI have been swirling for several months now, so their announcement of the Mavic Mini just a few days ago removing the cap off a bottle that had been building with anticipation and speculation.

First off, the Mavic Mini truly stands up to its name. This drone is smaller than the Spark or the Mavic Air. It is no longer an exaggeration to say that the Mavic Mini is about the same size as an iPhone – at least, in terms of length and width. It has quite a bit of thickness to it, but you can still comfortably fit the Mavic Mini inside a small pouch or even stash it in your jacket pocket.

What’s more important is that the Mavic Mini weighs exactly 249 grams – in other words, just under the 250-gram limit that the FAA has imposed as the minimum weight for drone registration. This deliberate design choice seems to be one of the selling points of the Mavic Mini. Of course, drone flight rules vary from one country to another, so this characteristic might not be as big of a deal to buyers outside of the US.

It has to be said, though, that the 1-gram difference between the registration minimum and the weight of the Mavic Mini is virtually nothing.  Placing a sticker or, more importantly, an SD card on the Mavic Mini may already push it beyond the limit. We can’t say for sure that the FAA is going to pursue you if you fly an unregistered drone that weighs just 2 grams above the limit.

Legal implications aside, the Mavic Mini is one of the lightest drones to have ever been produced by DJI. This excellent portability should be enough reason for a lot of people to get it – and we haven’t even talked about the specs yet.

Let’s say it right away: the Mavic Mini does not have a 4K camera. What it does have is a 1/2.3” sensor that shoots 2.7K video at 30 fps with the option of dropping to 1080p at 60 fps, and 12MP stills. This is the next best thing you can from a 4K camera, which is still impressive for a drone this small. All the footage is saved on a swappable microSD card.

The camera has an ISO range of 100-3200, which is the same as many other ultra-portable drones, barring super high-end ones like the Mavic 2 Pro. This means that, like many other drones, the Mavic Mini tends to suffer shooting footage in low light. If you are looking for a drone that can handle different lighting conditions, you may have to look for a model with a more robust camera.

The Mavic Mini features some of the favorite autonomous modes that we have come to expect from prosumer DJI drones. Before you start capturing footage, you can choose between three flight modes: Position, Sports, and CineSmooth. Position mode maintains the default speed of the drone (8 m/s), Sports allows it to fly at maximum speed (a speedy 13 m/s), while CineSmooth slows it down (4 m/s) so your still and videos come out smoother.

The selection of pre-programmed flight paths, called QuickShots, is limited but sufficient. Circle keeps the drone’s camera trained at you while it flies around at a fixed altitude and distance. Helix takes this effect to another dimension, with the drone circling away from you for an even more dynamic shot. Rocket mode has the drone fly straight up while the camera is pointed downward. The massively popular Dronie shot is still there and has the drone fly backward and upward while maintaining the camera’s focus on you.

One glaring deficiency of the Mavic Mini is the lack of any subject tracking mode. There is simply no implementation of it, whether by GPS or optical sensor technology. As this is one of the most popular and useful automatic camera modes, its absence in the Mavic Mini is seriously limiting.

The gimbal looks just like the one that you’ll find in the Mavic Air, and we expect it to perform just as well – impeccably smooth in almost all situations. The camera can be tilted from straight forward down to °90 below. All other camera movements will have to be done by maneuvering the drone.

Unlike the Spark, the Mavic Mini comes with a dedicated controller by default. The controller looks like the ones that come with the other Mavic drones with antennae and a phone cradle that fold in and screw-on joysticks. These elements help keep the controller compact and portable, in true DJI Mavic fashion. The micro-USB port on the left side acts as both the charging port and the connection to your phone when in use.

The controller can automatically switch between 2.4 GHz and 5.8 GHz bands and has a maximum transmission distance of 4 kilometers. Considering how small the Mavic Mini is, we don’t expect you to fly this drone anywhere near this distance.

The controls are quite intuitive with the two analog sticks controlling the movement of the drone and one trigger each for starting a video and taking a photo. To view a 720p feed from the drone’s camera, you will need to hook up a smartphone with the DJI app. The latency of the video feed can vary depending on how “polluted” your flying spot is with other radio signals but is rated at 170-240 ms.

One of the more impressive characteristics of the Mavic Mini is the fact that it comes with a 2400 mAh Intelligent Flight Battery that gives it up to 30 minutes of flight time. This was a relief for us, as lightweight drones are notorious for having small batteries. You don’t even need to look far for an example – the Spark can only fly 16 minutes before you need to bring it down, while the Mavic Air is only slightly better at 21 minutes.

The 30-minute flight time is an excellent design choice for the Mavic Mini, a camera drone that will almost exclusively be used for recreational flight and aerial photography. This extended flight time puts the Mavic Min up to par with more sophisticated Mavic models, such as the Mavic 2 Pro and Mavic 2 Zoom.

It’s hardly a surprise to us, but the Mavic Mini does not have any sensors that allow it to detect or avoid obstacles. In a way, the lack of obstacle avoidance goes hand-in-hand with the lack of autonomous flight modes – you’ll have to pay this drone a lot of attention while you fly it.

The launch price of the Mavic Mini is $399. The base package comes with the drone, a remote controller, one battery, one pair of spare propellers, a variety of charging cables, and a few other spare parts. At this price, the Mavic Mini costs less than half a Mavic Air and about the same as a Spark.

You also have the option of buying a Mavic Mini Fly More Combo for $499. This is an excellent deal that adds two spare batteries, a two-way charging hub, a set of propeller guards, and a carrying bag. If you’re interested in getting the Mavic Mini, we highly recommend splurging a bit more for the Fly More Combo.

Mavic Mini vs. other ultra-portable drones

Let’s throw out a couple of quick facts that can help you decide if a Mavic Mini is worth your money. As far as DJI drones are concerned, the easiest points of comparison for the Mavic Mini are the Spark and the Mavic Air.

It’s easy to see where the Mavic Mini holds the advantage. Being the lightest drone in the Mavic line, the Mavic Mini has achieved an unprecedented level of portability. DJI has also decided to deck out the Mavic Mini with a higher capacity battery than those in the Spark and Mavic Air, which is sure to result in a much more satisfying flight experience

The 2.7K camera on the Mavic Mini will certainly turn off more photography-oriented drone pilots who will not settle for anything less than 4K. Still, the Mavic Mini’s camera is still so much better than the 1080p camera on the less portable and similarly priced Spark. Each of these drones come with a 3-axis gimbal, so video stability is not an issue on any of the models.

Is the Mavic Mini worth it?

Both the Mavic Air and the Spark were massively successful drones for DJI. The formula that led to the success of these two models seems pretty clear: make the drones lighter, smaller, easy to use, and give them good cameras. The Mavic Mini seems like the perfect refinement of this formula.

The lack of a subject tracking feature and more granular control over video settings feels like a crutch for the Mavic Mini, especially since the previous generation Mavic drones had all these features. However, it’s entirely possible for DJI to add these features in a future firmware update. We won’t be holding our breaths, but the possibility is there.

We’re not sure if the fact that the Mavic Mini does not need to be registered is as much of a selling point as DJI expects it to be. However, if you’re looking for a drone that flies just under 250 grams, then this is as good as if you’re going to get.

If you’ve been on the fence for a long time over whether you should get a drone or not, then the Mavic Mini might be the perfect time to jump in. And while $399 isn’t an insignificant amount of money, the Mavic Mini seems like it more than justifies the price.

Is there value in holding out for something better? The past years have seen drone technology evolve faster in so many ways that you can probably expect another drone to trump the Mavic Mini is less than two years’ time. The answer is yes – there will always be something better down the road. Buying a drone for fun is never going to be a practical move but flying drones and taking aerial photos will always be addictively entertaining. If you’re going to buy a drone eventually anyway, then why not buy one now?