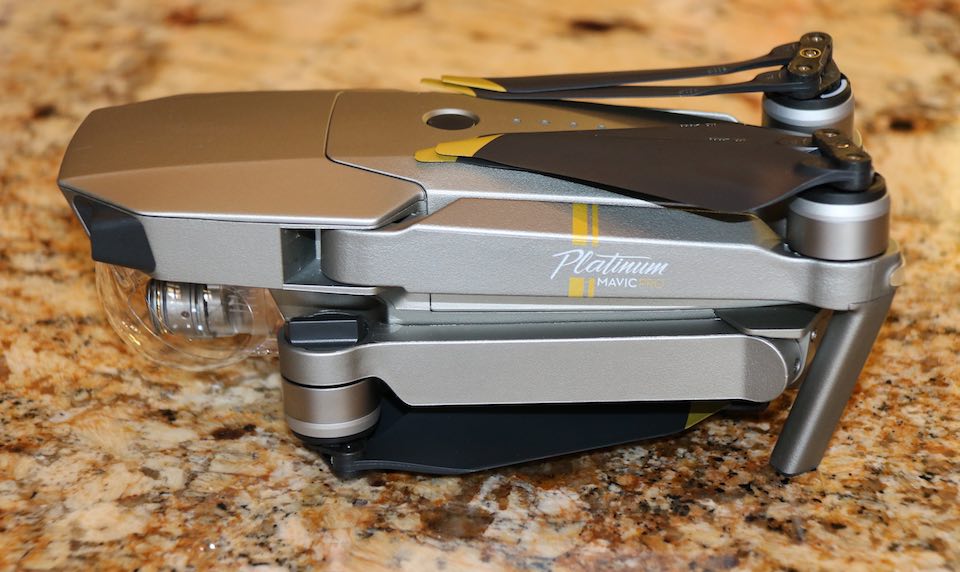 by Joseph Flynt
Posted on December 22, 2017
15 Shares
3D Insider is ad supported and earns money from clicks and other ways.
DJI has just released the Mavic Air 2. See all of the specs here.

The DJI Mavic Pro is one of the most popular drones from the best drone manufacturer today. It comes in a compact design which allows its propeller arms to fold inside its own body, making it incredible portable and only about the size of a water bottle.

It has a gorgeous grayish black finish with golden accents on the propeller arms. Its small size won’t leave you short-changed on features though – it has a 4K camera with a 3-axis gimbal, multiple sensors, and top-of-the line range and battery life.

DJI has released a new version of the Mavic Pro that is a step up from the earlier version. The DJI Mavic Pro Platinum is about $100 more expensive than its older counterpart. We know what you’re thinking. Is it worth the additional $100? In this article, we take a detailed and hands-on look on DJI’s new Mavic Pro Platinum. 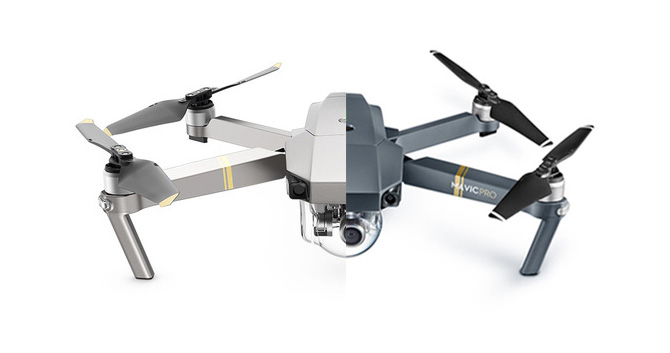 The original Mavic Pro is a thing of beauty. It has a sleek finish and a futuristic look unlike any other drone from DJI (or other drone manufacturers for that matter). It has smooth and round corners that give it a polished and proud look.

DJI has managed to improve on the design of the original Mavic Pro with the Platinum edition. The new Platinum edition makes a statement with its classy silver colored finish and gold accents. The colors complement each other better than the original colors. We were worried that it might be too flashy and attract too much attention, but we are pleased to say that when you see it in person it is simply striking. 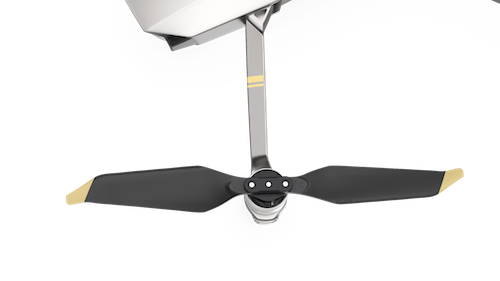 The new Mavic Pro Platinum comes with the brand new 8331 propellers. These propellers are more aerodynamic, and also adorned with your choice of platinum or gold tips. There is no difference between the two tips except for aesthetics. We prefer the gold tips because they complement the gold accents on the drone.

The onboard camera of the Mavic Pro Platinum is exactly the same as the one on the original Mavic Pro. The high-end camera can capture 4K video at 30 fps and take high-resolution 12 MP photographs. Compared to the cheaper DJI Spark, the footage from the Mavic Pro is a drastic improvement.

The camera also comes with some nifty smart features, such as a ‘follow me’ mode where the drone follows a person as they do cool things. The ‘follow me’ feature even has 2 modes: Profile Mode keeps the Mavic side-by-side with the subject, while Spotlight Mode has the drone flying around while the camera stays fixed on the subject.

Similar to the signature feature of the DJI Spark, the Mavic Pro also allows you to take quick selfies with just some simple hand gestures. DJI has also realized the potential of drones for indoor photography and have included a “tripod mode” with the Mavic Pro. In this mode, the drone is very slow and very stable, but we still recommend the use of propeller guards should you decide to shoot indoors for the safety of everyone nearby. There are a dozen flight modes to help you capture the perfect footage.

The camera comes with a 3-axis mechanical gimbal, which reduces shakiness and distortion in your photos or videos. Take note that the camera has no digital image stabilization capabilities, but the mechanical gimbal does an even better job than software.

The array of sensors in the Mavic Pro Platinum also do not differ from those in the older Mavic Pro. This is actually a good thing, since the Mavic Pro is equipped with a very good set of smart and autonomous sensors.

The Mavic Pro comes with multiple obstacle sensors, and an altitude sensor. This allows the drone to avoid obstacles and crashes even without pilot intervention. Better yet, these sensors come with redundant backups, a prudent measure should one or more of the sensors fail.

The sensors do not guarantee that you will not crash though. Don’t fly around thinking that the sensors give you a license to be careless. In our opinion, a totally crash-proof drone is still a few years away from being developed. The obstacle avoidance sensors of the Mavic Pro are on the bottom and the front of the aircraft. The sides, back, and top of the drone are unprotected.

The remote controller of the original Mavic Pro allows for an impressive maximum range of up to 7 kilometers (4.3 miles). The Mavic Pro Platinum does not come with improved range values. The good news is that 7 kilometers is an amazingly good range, enough to rank the Mavic Pro and Mavic Pro Platinum among the top drones in the world for range. DJI is the only consumer drone company with ranges this high and 7 KM is the longest range they sell.

The Mavic Pro also comes with the OcuSync technology which allows for HD streaming of the drone’s video over long distances. This is a feature that is best experienced when accompanied with the DJI Goggles.

So far, the Mavic Pro and the Mavic Pro Platinum have not had any differences in their cameras, flight modes, or range. We are about to find out what is different between the two other than their design.

The original Mavic Pro boasts a battery life of up to 27 minutes, enough to rank it amongst the drones with longest flight times. The Mavic Pro Platinum has a 3 minute longer flight time at an incredible 30 minutes.

Although 3 minutes does not sound like a big difference, every extra minute in the air is precious with a drone. The extra 3 minutes allows you to go longer distances with more confidence giving you time to get the perfect aerial video.

If you’re a professional photographer, those 3 minutes may mean the difference between capturing the best moments of an event or missing them because you had to retrieve your drone and change batteries. Only you can really judge if you need those additional 3 minutes. The 30 minute flight time of the Mavic Pro Platinum makes it the longest lasting consumer drone you can buy (including the Phantom 4 Advanced and Pro).

We have tested the flight times of both drones, and the Mavic Pro Platinum consistently beats out the original Mavic Pro by several minutes. This is a real difference between the models and not just marketing.

A drone’s ESC basically controls the rotation of its motors using a system of alternating magnetic pulses. The ESC of the Mavic Pro Platinum comes with Field Oriented Control (FOC) technology, which uses a sinusoidal wave drive to control the magnetic pulses, which in turn drive the motor. The use of the FOC optimizes the power output of the motor, thereby better utilizing the drone’s battery.

You can install the 8331 propellers on the original Mavic Pro. In our tests, this gives you an extra 30 seconds or so of flight time and reduces the rotations per minute (RPM) by around 70 because of improved thrust.

The biggest difference between the two drones is the reduced noise levels. The buzzing noise of the Mavic Pro Platinum is 4 decibels lower than that of the original Mavic Pro – a number that seems low until you consider that decibels are measured in a logarithmic scale. This means that a 4 decibel reduction corresponds to about 60% noise level reduction, quite a feat if we say so ourselves. 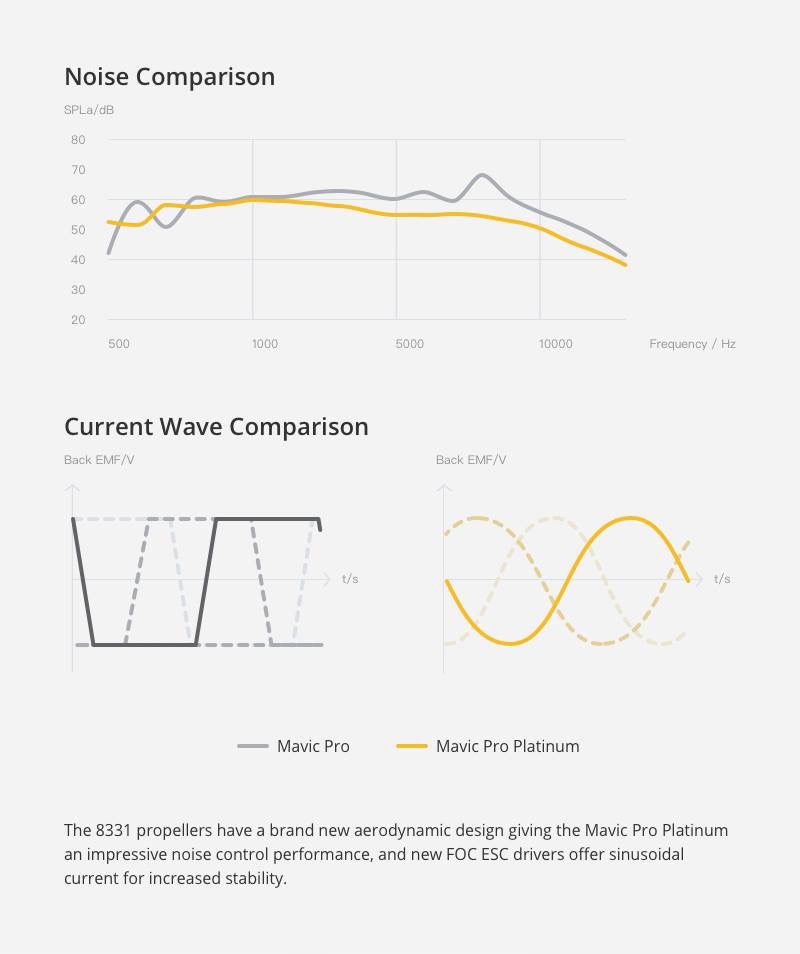 This noise reduction is the result of the upgraded propellers and ESCs as well. Older motors driven by square-wave drives naturally emit a loud, buzzing sound, which frankly can be quite irritating. The use of the sinusoidal wave drive on the ESCs, along with the more aerodynamic propellers combine to make a drastically quieter drone.

Installing the 8331 propellers on the original Mavic Pro does reduce the sound, but not to the levels of the Mavic Pro Platinum. Even with the upgraded propellers, the Mavic Pro is noticeably louder thanks to older ESCs.

The noise reduction of the Mavic Pro Platinum is not just marketing. We were consistently able to measure a several decibel difference between the drones, even when using the 8331 propellers on the original Mavic Pro. This is an easily discernible difference that will surprise you when they are side by side. The Mavic Pro Platinum is still somewhat loud, but it is by far the quietest drone of its class.

This sound difference makes drone less annoying when you are flying in public. You can hardly hear the drone when its 80 feet high in the air above you. The loud sound is often what sets people off about drones. If you are a wedding photographer, then the Mavic Pro Platinum edition is mandatory. 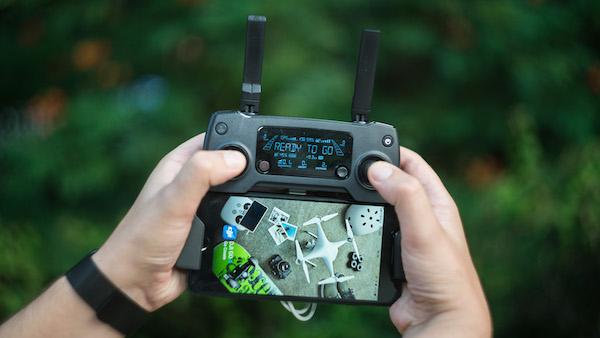 The Mavic Pro and the Mavic Pro Platinum share the same controller. The arms fold out and you can plug your phone into the controller to receive a live view from the drone’s camera on your phone. The controller supports Android and iOS. You can also control the drone with your phone but this limits the range to 100 meters.

The app is easy to use and well-designed. The Mavic Pro Platinum uses the DJI Go 4 app, which has more features than the previous version.

The Mavic Pro Platinum edition costs $1099, compared to the $999 retail price of the original Mavic Pro. You can also get a Fly More Bundle kit that comes with 2 Extra batteries, 2 Extra propellers, a charging hub, a car charger, a battery to power bank adaptor, and a shoulder bag for $1399.

The DJI Mavic Pro Platinum is a very good product which delivers in practically all areas – design, camera, smart flight modes, range, and battery life. Best of all, these features come in a portable package designed to be easily transported. The original Mavic Pro has consistently been one of the most popular drones in the market, and there are some very good reasons behind its very good market performance.

If you’re thinking of buying a DJI Mavic Pro, we highly recommend spending the extra $100 for the Mavic Pro Platinum. Aside from the distinct design, you’ll be able to get a little more juice out of your drone and significantly less sound.

The Mavic Pro Platinum isn’t a revolutionary upgrade from the original Mavic Pro. If you already own the older model, then it might be more practical just to hold on to it and get the upgraded 8331 propellers.

Although the upgrades that DJI rolled out with the Mavic Pro Platinum are small, they are still noteworthy. DJI is pushing the envelope forward with technology that will be added to future versions.  Moreover, DJI did not take the easy way towards improving battery life, since they could have just easily developed bigger batteries with longer capacities. By thinking out of the box, DJI is making their drones smarter.