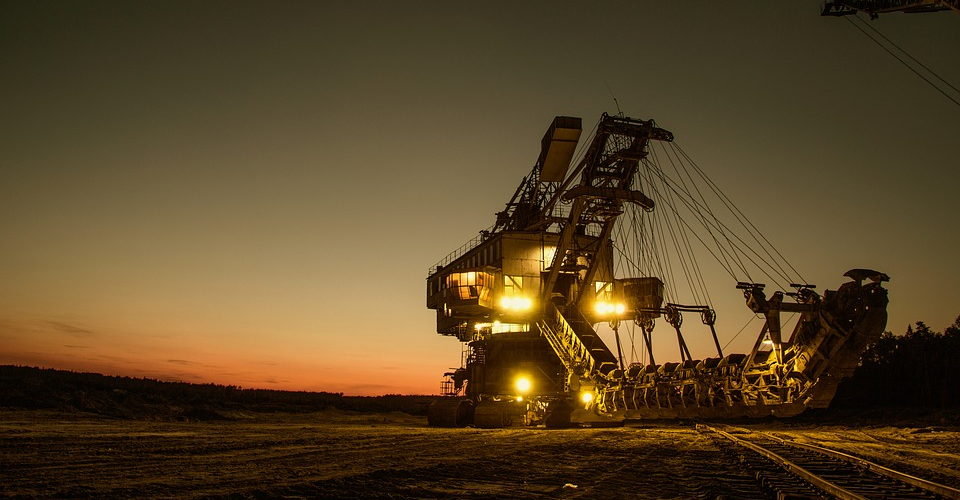 Drone Use in Mining: Pros, Cons, and Use-Cases

by Joseph Flynt
Posted on February 1, 2020
17 Shares
3D Insider is ad supported and earns money from clicks, commissions from sales, and other ways.

Drones continue to become more and more relevant tools across a variety of industries. An example of such an industry is mining – essentially one of the foundations of many of the modern technologies we enjoy today. With such a large scale of operations, drones have a way of simplifying and streamlining many of their processes.

How exactly are drones used in mining? What are the benefits that drones provide? What types of drones are needed for use in the mining industry?

How are drones used in mining?

The first mining company to use drones was BHP Billton, a global leader of iron ore production based in Australia and the US. The first trial of drones was done in 2015 in their Queensland site. The success of those trials led to the widespread adoption of the technology. Right now, drones are being used by BHP Billton for processes that would otherwise require the operations of manned aircraft, generating savings of up to 5 million Australian dollars per year.

How have drones been used by the mining industry? More and more ways have been devised in the last few years, partly driven by the evolution of drone technology. Here are a couple of the best examples: 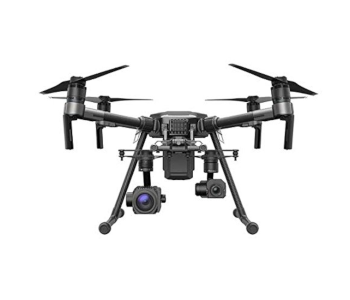 Even before a mining site is established, a drone can be used to assess the mineral potential of a site. This is a complex discipline that requires advanced knowledge of geology and mineralogy. However, the data that a drone can collect easily and quickly will prove to be very valuable to the process.

Drone-mounted cameras or LiDAR sensors can be used to create highly detailed orthomosaic maps and digital elevation models. Maps at this level of detail are very useful for exploring areas where access by foot is difficult. Such surveys would normally be done by manned aircraft – a much more expensive alternative.

As a company moves in on a new mining site, a detailed topographic map can help them plan for the infrastructure needs for the project along with the associated costs. Roads are particularly important for mining sites. Not only will these roads be used to haul equipment for excavation, drilling, and blasting, but the same roads will also eventually be used to haul out any of the ores retrieved from the mine. With a detailed map, project engineers can accurately determine how long the roads will be, as well as their specific slopes and turning angles.

Many mining companies also use drones as monitoring tools throughout their operations. Through drones, project supervisors and managers no longer need to physically visit the mining sites to keep abreast of the operations’ current status.

Most of the materials used in building the infrastructure of a mining site will be available on-site as stockpiles. While convenient because of their accessibility, maintaining an inventory of stockpiles can be a nightmare for the project manager. Not only is it dangerous to have a person on-site taking measurements of stockpiles in the midst of moving equipment, but these methods tend to have very large margins of error.

Drones encounter no such problems. By using drones, the threat of human injury is virtually eliminated. By using the same technology for mapping, drones can take photos of stockpiles from multiple angles and create 3D models. Volumetric calculations can then be done to these models for a more accurate inventory of stockpiles.

Whenever a mining company does any drilling or blasting, all preparations must be done impeccably. Not only are these activities inherently hazardous, but they are also very expensive. The 3D models created by drones can be cut and filled to determine the volume of material that needs to be blasted away. By being very precise in these operations, mining companies can avoid unnecessary expenses. Logistics preparation can also be simplified, as they can predict exactly how many truckloads of materials need to be hauled out of the site.

Mining sites can be huge. Due to the massive scale of operations and the generally busy environment of mining sites, it can be easy for people on the ground to overlook potential hazards in their surroundings. Safety officers typically use drones to give them a bird’s eye view of the site, which helps them spot hazards invisible from the ground. This could include unsafe practices, crevices or wall damage, and unstable slopes.

What are the benefits of using drones in mining?

Over the years, drones have become more compact and sophisticated. Whatever benefits they had when BHP Billton used them years ago have probably been augmented now. In the year 2020, what can drones offer the mining industry? 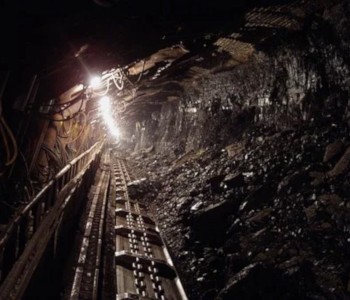 Drones are typically sent in to do the jobs that humans do unaided. Whether it’s a trek through mountainous terrain or a surveyor climbing a stockpile to make measurements, these are activities that pose a serious threat of injury to personnel.

With the aid of drones, people no longer need to expose themselves to the hazards of treacherous terrain and heavily forested areas. Yes, you’ll still need people to survey areas by foot or personally inspect the operation site, but sending in drones can massively reduce the scope of work that needs to be done.

The beauty of modern drones is that drone pilots no longer need to actively control them to get anything done. With simple GPS-guided navigation, drone pilots can simply point to a destination or chart a path for the drone to follow. With these systems, drone pilots can focus on identifying hazards in their surroundings or capturing essential stills for photogrammetry.

Professional drone mappers hardly have to do anything once they reach the site. With the aid of mapping software, all they have to do is to define the boundaries of the area of the interest and allow the software to take over flying the drone.

Automation isn’t just a matter of convenience – it also allows drone pilots to save flight parameters and load them up next time for repeat surveys. This is important if you do any sort of regular surveys over a site. For instance, you may be looking for signs of subsidence over a mining site, or you may need to document the changes in the topography of your site because of regulatory requirements. With repeatable surveys, you’re sure that you’re collecting data from the exact locations of the previous surveys.

In the age of high-definition cameras and sophisticated LiDAR sensors, drones can capture data at an accuracy that is at par or better than any ground-based methods. Accuracy, of course, depends on the type of technology you’re using.

One of the simplest mapping methods, called photogrammetry, can achieve an accuracy of up to 1 meter. The more sophisticated (and much more expensive) LiDAR sensors can enhance that accuracy to up to 1 centimeter. This is an impressive feat and will certainly help mining companies, especially when it comes to maintaining an accurate inventory of their stockpiles. The planning of boreholes, blast sites, and roads would also benefit from more accurate 3D models generated by drone surveys.

Mining is serious business, and you won’t expect some hobby-grade drone to be flying around a mining site. Aside from maintaining an image, picking a professional-level drone should ensure that you are equipped with all the features that a mining company will require. 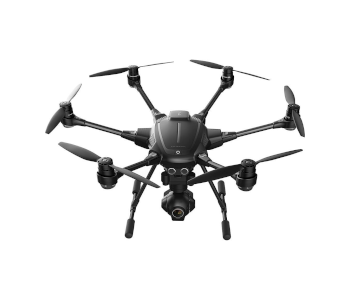 Mining sites can stretch several acres in all directions, so you need to get a drone that can move from Point A to Point B as quickly as possible and cover huge stretches of land in a single battery cycle. You would also want a drone that can reliably deliver real-time videos even when it’s already a few miles away, especially if you’re using it for operations surveillance.

With these considerations, we wouldn’t go with an ultra-portable drone, even the premium ones that have come out in recent months. Instead, we’re inclined to go with something a bit more robust, like the DJI Phantom Pro V2.0 or the Yuneec Typhoon H Pro. Both these drones can fly at least 25 minutes on a single battery cycle and have a controllable range of more than four miles.

A mining site, or one yet to be established, may have several different needs. A drone with a high-definition camera may be enough to do a preliminary survey of a future mining site, but more detailed surveys in preparation for infrastructure could benefit from more accurate LiDar sensors. If you are doing any blasting or drilling operations, a drone equipped with a thermal camera may even be used to help spots of runaway temperature buildup.

For this reason, it may be worthwhile to invest in a drone that can work with different payloads. This is a rare feature and one that is typically only seen in very expensive models. A very good example if the DJI Matrice 200 series, which can be outfitted with a variety of high-resolution cameras, thermal cameras, cameras with zoom lenses, or even very bright searchlights. The Yuneec Typhoon H520 is a similarly versatile camera that comes with a hot-swap adapter for different payloads.

The last qualification, thankfully, is not as rare as the first two. All automated drone flight modes rely on an onboard GPS feature. Basically, the flight controller sets a destination or flight path which the drone follows. While the drone flies autonomously, you are free to move the camera around. For mapping surveys, the camera or sensor mostly also collects data without pilot intervention.

The good thing about modern drones is that you will hardly find any drone being sold nowadays that does not come with onboard GPS and automated flight features. Even ultra-portable drones can be used for basic photogrammetry, although they don’t have interchangeable payloads.

From quarries in Luzern to uranium ore mines in Namibia, many mining companies have recognized the value of augmenting their planning and operations with drones. A single drone flight can capture more topographical data than a week of surveying on foot. The only other alternative, which is to fly a helicopter or manned aircraft over the mining site, will cost thousands of dollars for each flight. Not only is drone flight safer and cheaper than either of these old-fashioned methods, but it can capture data at a comparable or superior level of accuracy.

Mining sites are inherently exciting places. Between the massive moving machinery and the blast explosions, there’s a lot going on that can really get your blood pumping. But you know what’s really exciting for the mining operators and project managers? The thousands of dollars of savings that they can get if they start using drones.