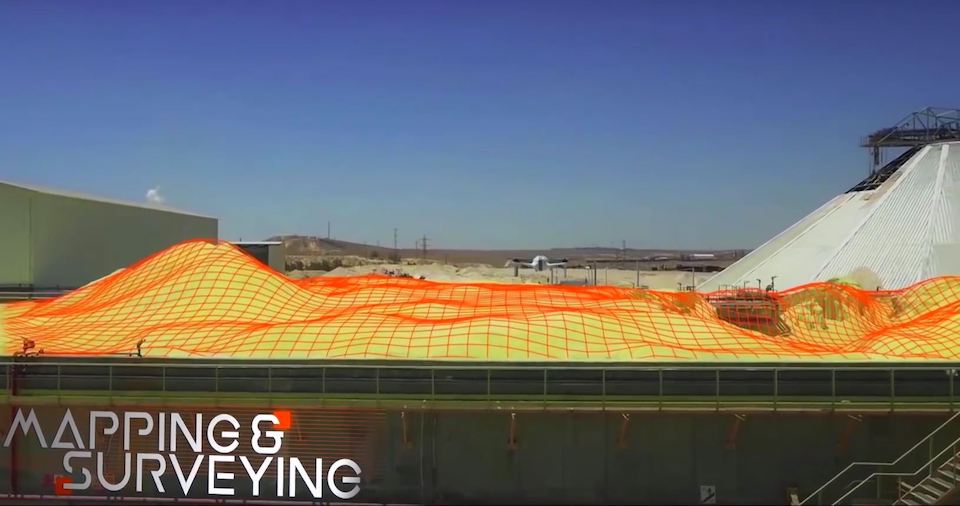 by Amada Pearson
Posted on January 11, 2018
31 Shares
3D Insider is ad supported and earns money from clicks, commissions from sales, and other ways.

To the uninformed, the whole idea of mining may seem exciting – dynamite, explosions, ore flying everywhere! The reality, however, is a lot less…combustible, especially when it comes to making a mine more profitable. A big part of improving the bottom line lies in cutting costs, and this is often a game of millimetres, not dynamite.

That doesn’t mean it all has to be unexciting. If there’s one way to make improved efficiencies exciting, it’s by making them truly effective. If there’s two ways, it’s by accomplishing them with futuristic technology like an automated drone.

Industrial drones have been a hot topic for the last few years, but for industries like mining that are firmly focused on optimizing processes through automation, it is automated industrial drones that are making the difference.

Automated drones are unmanned aerial vehicles that have been designed for end-to-end automation, able to operate with no human intervention. As automated drones can launch, fly, collect and process data and land automatically it completely eliminates the need for a human pilot, thereby eliminating the significant expenses of either training and certifying an employee as a pilot, or having one on call. It also eliminates the delay of waiting for a pilot to become available, and removes the possibility of human error.

Leading automated drones are also capable of housing themselves in what are often extreme industrial environments and can complete their own maintenance, including swapping of batteries and even sensors, turning an automated drone into a true industrial multitool by enabling a wide range of applications – a must for UAV mining.

Drilling and blasting made better

As noted above, making a mine site’s blasts better doesn’t often have much to do with bigger explosions. Instead it has a lot more to do with precision, something automated drones can majorly impact. Automated drones can easily compare a blast plan with actual drill-hole positions in order to check alignment, allowing for the minute yet essential adjustments that make for a more exact blast that produces the sought-after fragmentation size – one that can be immediately analyzed with an automated drone to inform downstream loading and crushing processes.

With their efficient data capture and processing, automated drones can also provide digital elevation models, both pre- and post-blast, that eliminate the considerable hours of work put in by human personnel that would be required by traditional data capture methods for these models.

Speaking of safety, one of the most essential things an automated drone can do for a blast site is provide a fast but comprehensive visual assessment using livestream video to ensure all personnel and equipment are at a safe distance prior to the blast. (Not a small improvement, but one that needs to be noted nonetheless.)

Some of the most important work completed at a mine site is of the tedious variety. This very much includes surveying and stockpile evaluations, two processes that don’t automatically spring to mind on the topic of mines but that need to be accurately completed for the site to function like a well-oiled machine.

In a case study comparing the surveying work of an automated drone with traditional ground-based methods, Israel Chemicals Ltd. found that the automated drone was able to use 9.5 million points compared to the traditional method’s 360 points, resulting in a stockpile measurement difference of a crucial 1.37%.

The automated drone was also able to complete in hours what takes days using the traditional method. In addition to greatly impacting business processes, this also goes a long way towards protecting human employees. As Yahel Nov, Vice President of Business Development for leading automated drone manufacturers Airobotics recently discussed, for every minute flown by an automated drone, that’s a half hour a human employee does not have to spend doing a dangerous job.

While hauling may seem like a simple way of getting ore from point A to point B, as mining engineers know, haul roads are to a mine site as veins are to a human body. With just a 1% rolling increase causing higher fuel costs and slower cycle times, the importance of keeping haul roads in absolute optimal condition cannot be overstated, thus the benefits of regular, detailed inspections of those haul roads cannot be overstated.

Automated drones can easily transmit precise data on road conditions, either as part of a regular inspection process designed to keep roads in top condition, or in order to assess damage that requires an immediate fix, and this data can be gathered and transmitted without impacting traffic or endangering personnel. This provides engineers with the best information as quickly as possible, ensuring all necessary routine maintenance is completed and that repairs are made fast, minimizing operational disruption.

In the event of a blasting incident, a haul road incident or any other sort of emergency situation, every single second is vital, and having a drone ready to automatically launch, fly and transmit information could be the difference that saves equipment, infrastructure and even human lives. Mining sites are some of the most dangerous industrial environments in the world, and a solution like an automated drone goes above and beyond when it comes to protecting what truly matters.

Whether the difference an automated drone makes for a mine site can be measured in millimetres, milliseconds, hundreds of thousands of dollars or even human lives, the decision-makers at mine sites around the world are realizing those differences are well worth the investment in this emerging technology. Massive blasts may seem exciting, but improved efficiencies, slashed costs and increased safety are what’s truly invigorating, and they are what is driving the current evolution in mining.

Amada Pearson
I've always been interested in tech and I've been writing about it for 6 years. I love reporting on what is new and sharing it with you.
0 comments
Share now:
31 Shares
YOU MAY ALSO LIKE
SEE MORE