by Joseph Flynt
Posted on July 23, 2014
17 Shares
3D Insider is ad supported and earns money from clicks and other ways. 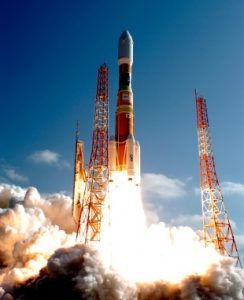 When I think of Mitsubishi I think of two things, heat pumps and cars, but I forget that the Japanese company is known for much more than its motor vehicles and heating systems. Mitsubishi Heavy Industries (MHI) has been producing parts for Japan’s space program for some time and they have just announced plans to begin using 3D printing in rocket development.

Japan’s Aerospace Exploration Agency (JAXA) plans to test a new large-scale rocket by 2020 and Mitsubishi is tasked with producing and developing much of the rocket. To reduce the enormous cost of manufacturing and developing the rocket, Mitsubishi turned to 3D printing technology, which is already been used to produce rocket components for the likes of NASA and SpaceX.

Last year NASA successfully tested a 3D printed rocket injector to prove the feasibility of 3D printed components for space missions. It produced 20,000 pounds of thrust and NASA have continually improved performance since then.