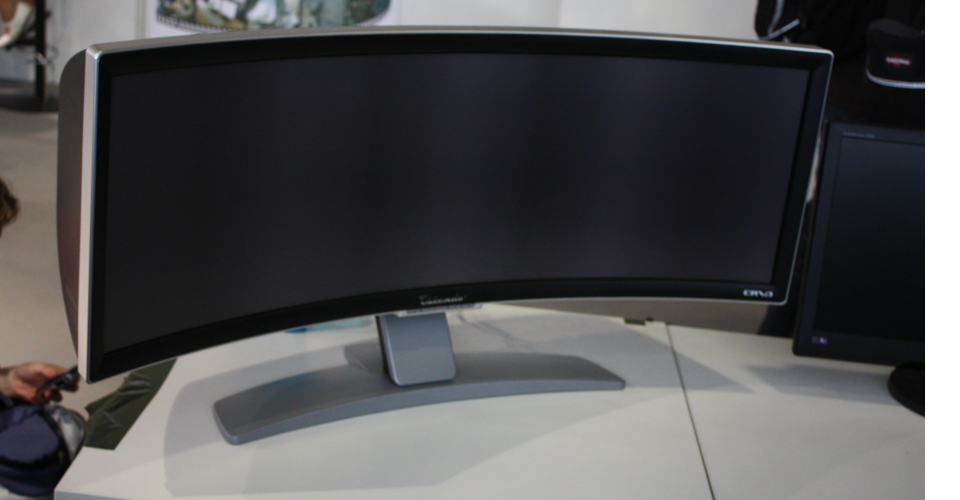 by Joseph Flynt
Posted on March 16, 2019
13 Shares
3D Insider is ad supported and earns money from clicks, commissions from sales, and other ways.

When shopping for curved monitors, you’ll notice that manufacturers usually mention the curvature or curve radius of the monitor in the product specifications – such as 1800R or 3800R. However, manufacturers don’t always provide a more detailed explanation about what exactly those numbers mean and what makes them different from other curvature ratings, leaving customers confused.

In this article, we’ll give you a rundown of the different curvatures of monitors, from the aggressive curves to the much less pronounced curve.

Simply put, the listed curvature of a monitor refers to the resulting radius in millimeters if you form a circle composed of multiples of that monitor. For example, if you form a circle with the ViewSonic VP3881 – which has a listed curve radius of 2300R – and measure the distance from the center of the circle to the perimeter, the radius would come out as 2300 millimeters. A lower number translates to a sharper, more pronounced curve.

Regardless of the curvature, curved screens are best experienced on monitors larger than 30 inches, with ultrawide monitors being the most recommended, especially for gaming use. (Not all games support a 21:9 aspect ratio, though, so for some games, there will be black borders present, which can be annoying for some people.)

1800R and 1900R are common curvatures while 1500R is not often implemented, especially in curved ultrawide monitors, with the Samsung C34J791 being the most notable in that category. All three translate to a sharp or aggressive curve. The difference between them is minimal, especially between 1800R and 1900R.

Monitors with a 1500R, 1800R, or 1900R curve have a thick chassis, which means they take up more space, especially once you factor in their stand. The Samsung C34J791 (1500R) is around 6.5 inches thick while the Acer Predator Z35P (1800R) is roughly five inches thick. For comparison, regular flat monitors are usually just around two inches thick. The thicker chassis of monitors with a 1500R, 1800R, or 1900R curvature also means they will stick out more when in a wall-mounted setup.

Curved monitors with a sharp or more pronounced curve are great for gaming – but only when the monitor is larger than 30 inches, with ultrawide monitors being the most ideal. They offer a more immersive gaming experience. A regular, non-ultrawide 24-inch or 27-inch monitor with a sharp curve radius won’t have the same effect, especially the former.

Keep in mind that not all games are best experienced on a curved ultrawide monitor. Racing games, flight simulators, and open-world RPGs will look great on such a screen. On the other hand, fast-paced competitive games where it’s important to be able to easily see the entire screen are better on smaller, flat monitors.

For productivity or office work, monitors with a sharp curvature are also good, but not for all kinds of work. They are good displays for content writing, coding, and processing spreadsheets. But for CAD software, graphics design, and other work that requires you to be able to easily tell whether lines are really straight, they are not recommended.

Monitors with a 2300R curvature are good for productivity, watching movies, and gaming, making them a good all-around option. The bad news is that there aren’t many of them currently on the market, with the Dell U3818DW and the ViewSonic VP3881 being the most notable ones. And like with monitors with a sharper curve, not all types of work and games are suitable on 2300R curved monitors – they are not the best fit for art-related work and competitive gaming. 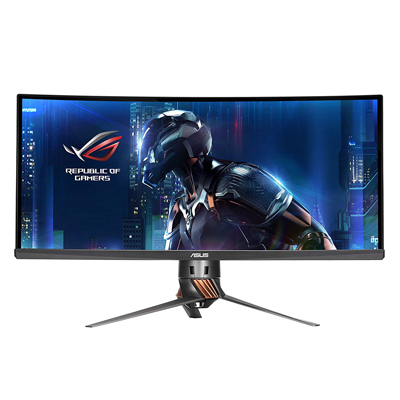 Like 1800R and 1900R, a 3800R curve radius is common. It’s often implemented in ultrawide monitors, regardless whether the unit is designed for gaming or productivity. Compared to 1800R and 1900R, 3800R is a significantly softer or less aggressive curve, with the curve not easily noticeable from afar.

Although there are some models that come in a thick casing – like the Asus ROG Swift PG348Q – most 3800R curved displays are thinner than their sharp-curved counterparts. For example, the LG 34UC79G-B is just 1.6 inches in depth, according to the official specs. This puts it on the same level as regular flat monitors regarding thickness and translates to a relatively smaller footprint.

Since 3800R curved displays have a thinner chassis, they don’t stick out too much when mounted on the wall. This is great because curved ultrawide monitors have a large footprint overall, regardless of the curvature, so many people prefer a wall-mounted setup to save desk space.

Compared to monitors with a much sharper curve, 3800R curved ultrawide displays are more suitable for office work or productivity than gaming. They are great for general office work such as typing, working on spreadsheets, and creating presentations. Some people also don’t experience major issues outside of the initial adjustment period when using such monitors for graphics design, CAD software, photo editing, and other similar fields.

While they are not as immersive as their 1800R and 1900R brethren, 3800R curved ultrawide monitors are also good for gaming. They are good for flight simulations, sports games, racing games, real-time strategy games, and adventure games with pretty graphics. But for fast-paced competitive games such as Overwatch and Counter-Strike: Global Offensive, they are not recommended.

When it comes to curved monitors, it’s recommended to sit very close to the screen to get the maximum effect of the curved screen. But for non-ultrawide or 16:9 curved monitors smaller than 30 inches, simply go for whatever makes you comfortable, regardless of the curvature, as the curve won’t really make a big difference.

For 1500R, 1800R, 1900R, 2300R, and 3800R ultrawide monitors larger than 30 inches, it’s best to sit around two to four feet away from the screen for the best experience. The sharper the curve, the closer you need to be if you want a truly immersive experience, most especially for gaming. If you are going to use your display primarily for gaming and prefer to sit more than five feet away from the screen (i.e. console gaming distance), then you’ll be better off with a large, non-curved monitor.

In the end, it all comes down to personal preferences. What works for other people may not work for you. The best way to check which curvature is the best for you is to test a few monitors. It’s easier if you can go to a brick and mortar shop that sells curved monitors or have nearby friends who own one.

Lastly, curved monitors are not automatically better than flat monitors, despite some companies saying otherwise, so don’t make a big decision based on the curvature alone. There are more important aspects to consider when shopping for monitors – such as panel type, resolution, and refresh rate. If you think curved monitors are for you, check out our buyer’s guide on the best curved monitors.