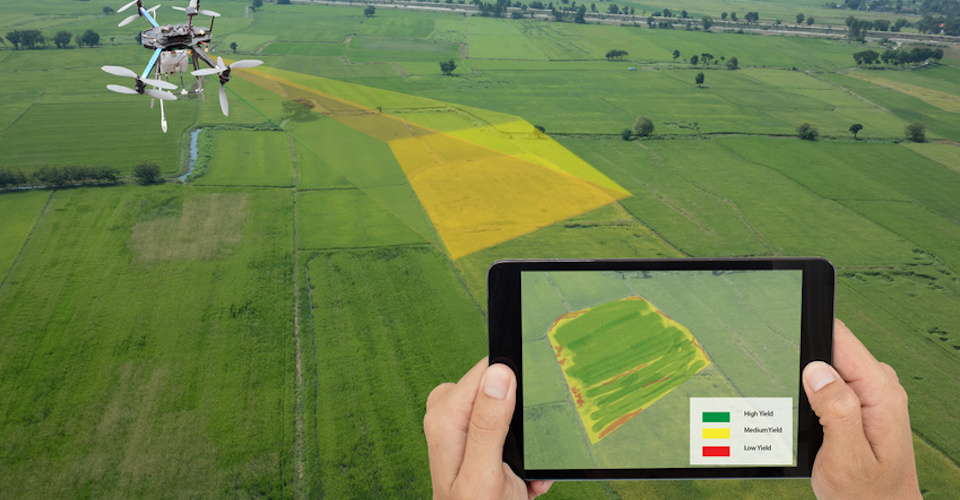 by Joseph Flynt
Posted on December 14, 2018
8 Shares
3D Insider is ad supported and earns money from clicks, commissions from sales, and other ways.
DJI has just released the Mavic Air 2. See all of the specs here.

The advent of payload and specialized drones have made drones a disruptive technology. An example of this is the use of NDVI cameras for measuring agricultural crop health. With drone-mounted NDVI cameras, crop inspection can be done more accurately, and with much less manual effort. What exactly is NDVI and how does this technology farmers with high-precision crop management? In this article, we take a detailed look at NDVI cameras, how they work, and which are the best models available today.

NDVI, or the normalized difference vegetation index, is a long-established metric to measure crop health. It is based on the premise that live green plants absorb solar energy and re-emit them as near-infrared energy. Chlorophyll, the pigment in plants that is responsible for photosynthesis, strongly absorbs visible light. With these basic concepts, we can come up with the rules of thumb followed by NDVI: vegetation strongly absorbs visible light, and strongly reflects near-infrared light. To simplify the analytical process, the color red was chosen to represent the visible spectrum in determining the NDVI.

The formula for determining the NDVI is stated as:

By design, the NDVI value for any subject will be within the range of -1.0 to +1.0. The beauty of using a normalized index, rather than a straightforward ratio of near-infrared light versus visible light, is that values are restricted in a very small range. This avoids the problem of a ratio having a range of values from zero to infinity – meaning values can become very unwieldy.

From its mathematical definition, we can expect highly vegetated areas to have more positive values from 0.3 to 0.8. White surfaces, such as clouds and snow fields, reflect more visible light and will have negative NDVI values. Bare soil surfaces reflect a small amount of near-infrared light, resulting in slightly positive NDVI values within the range of 0.1 to 0.2. NDVI values near zero, either very partially negative or positive, can be expected from bodies of water since they exhibit low reflectance of both visible and near-infrared light.

Despite the flexibility of NDVI, using and applying it in different situations requires knowledge of its limitations. Several external factors may influence the NDVI values of a particular study area, and the effect of these factors cannot be quantified or controlled using typical NDVI metrics.

The most common problem encountered in collecting NDVI data is the presence of cloud cover, which can cast large shadows on areas with otherwise heavy vegetation. Other atmospheric conditions, such as heavy humidity and the presence of aerosols, also have deteriorative effects on the rate of transmission of light

Bare soil also presents a problem when assessed using NDVI technologies. This is due to the color change that soil undergoes when it absorbs moisture, giving the false impression that changes occurred due to vegetation and not just due to precipitation.

Since NDVI relies solely on reflect light, it also has to contend with the inherent problem of anisotropy. This refers to the variation in angles of reflected light off surfaces with different orientations. This means that the NDVI of any survey area suffers a natural variability due to the variation in angular illumination and observation of different objects at any point in time.

The common method to address these limitations is to generate composite NDVI maps using data captures over a period of several days or weeks. Still, this is no assurance of the level of accuracy and representation of the generated models since this remedial action does not directly address the limitations mentioned above. A far more elegant and sustainable solution was provided by the development of the enhanced vegetation index.

The primary reason for the use of red as a surrogate for visible light in the original definition of the NDVI was the limitation of the old Kodak Color Infrared film. Since photography capabilities have become greatly advanced since then, a modified version of the NDVI has similarly been developed.

This new index, called the enhanced vegetation index (EVI), uses separate values for the red and blue bands of visible light. This slightly more complex algorithm considers corrections due to canopy cover and atmospheric conditions. With its ability to minimize background and atmospheric noises, the use of EVI has become increasingly popular since the year 2000. It is currently being used by Terra and Aqua, two orbiting satellites being maintained by NASA.

Nowadays, most NDVI cameras available in the market use the model for multiple bands as proposed by the EVI. However, they are still usually still marketed as “NDVI” cameras as the term is more established and familiar in the lexicon of the agriculture industry.

How does an NDVI camera work?

An NDVI camera is different from a typical camera because it contains sensors that can capture non-visible light, particularly light in the infrared frequency range. This makes and NDVI camera essentially a combination of an infrared camera and a typical RGB camera. Reflected light captured in the infrared range and the visible light range are stored in separate images, and their values can be combined in several ways to generate composite NDVI images.

There are also so-called “synthetic NDVI” cameras. These cameras are only equipped with RGB sensors like any typical camera but are programmed with an algorithm that simulates near-IR light and comes up with a “best guess” NDVI value. Although synthetic NDVI cameras are a much more affordable alternative, they are generally not recommended for commercial use. NDVI being a limited technology as it is, a “best guess” NDVI is expected to further magnify the errors inherent to the technology.

What are the benefits of drone mapping using NDVI?

Before NDVI cameras were mounted on drones, it was a technology primarily used by orbiting LANDSAT satellites to assess global vegetation conditions. Obviously, this is only appropriate for large-scale studies on areas such as rainforests and huge tracts of farmlands.  With drone-mounted NDVI cameras, scientists and farmers can conduct smaller scale studies on crop health and vegetation changes. Flying at lower altitudes also provides much higher resolution that can capture subtle details that are not visible at satellite-level imagery.

NDVI mapping using a drone is a low-effort and safer alternative to manually inspecting otherwise inaccessible forests. Farmers also save a lot of time and effort in assessing crop health when they merely have to fly a drone along an automated path over their whole farm. Drone mapping using NDVI has the potential of reducing several weeks’ worth of work into a few hours. Since aerial drone surveys are easily programmable, these surveys are easily repeatable and lessen the effects of human error.

What are the best NDVI cameras available today?

The use of drones for agricultural surveying is still very much at its infancy. Although NDVI technology has been used for a long time, it has only been recently that NDVI cameras were made compatible with drone technology. Right now, people interested in doing drone-mounted NDVI surveys have two options: to modify their existing DJI drones with additional NDVI sensors, or to buy a fully packaged NDVI camera drone kit.

Several companies have made cameras that are compatible with DJI drones. The DJI NDVI Upgrade from Sentera is an example of this option. The Sentera 1.2 MP NDVI Single Sensor is the smallest and lightest NDVI sensor available today. It is compatible with the Phantom 4 Pro V2.0, and all Inspire and Mavic drones. It can be connected securely to the drone using Sentera’s Double 4K Lock-and-Go stabilizing gimbal. You won’t have to worry about not attaching it properly, as Sentera does the modification for you.

Another company that offers NDVI modification to an existing drone is MAPIR through their Survey 3W NDVI Mapping Camera. This camera is about the size of a GoPro Hero and can be attached to a huge number of popular drones using any of their various mount options. Right now, mounts for the Survey 3 cameras are available for the Phantom series, the Inspire 1, and the Mavic Pro,

The Survey 3 cameras can capture images in the near-IR, red, and green bands. It has one of the fastest interval timers at 1.5 seconds, although the actual capture speed will still be limited by the write speed of the microSD card used. A feature that we like with the Survey 3 cameras is the provision of an external GPS receiver that automatically geotags each image that the camera captures.

Another option is to buy a drone that was especially designed for agricultural surveying. In this field, Parrot has become one of the premium names because of the excellent Parrot Sequioa + multispectral sensor. This sensor is an integrated module that combines a 16MP RGB camera, and 1.2 MP single-band camera, a GPS receiver, an IMU, and a magnetometer. In other words, it contains all the sensors you will ever need to conduct a crop health survey in an incredibly lightweight and compact package.

Instead of the three bands that is offered by other NDVI cameras, the Parrot Sequioa + offers four: green, red, red-edge, and near-infrared. A separate sunshine sensor even records the intensity of sunlight during the drone, providing more data refining and manipulation options. The Parrot Sequioa + was specifically designed to work with the Pix4D image processing software.

Parrot did not stop with just an excellent multispectral sensor: they offer end-to-end crop health survey solutions with their two drone models that integrate the Parrot Sequioa + the Parrot Bluegrass is a typical quadcopter that provides surveyors with the typical ruggedness and ease-of-use of quadcopter drones. The drone comes with the Parrot Bluegrass Field mobile app that allows you to generate NDVI maps in real-time while the drone is still flying, giving you the opportunity to alter survey parameters without having to go back to the drawing board.

For more detailed analysis, the data collected by the Bluegrass can be processed using the Pix4Dfields software. With the built-in algorithms of Pix4Dfields, you can easily generate index maps and create prescription maps for problem areas. Data from Pix4Dfields can even be integrated into a farm management information system (FMIS) platform for seamless integration with actual in-field farm management.

Parrot also offers the Parrot Disco-Pro Agf for more experienced drone pilots who want to cover huge areas quickly. Instead of a quadcopter, the Disco-Pro Ag is a fixed wing drone that maximizes its battery life to cover up to 60 hectares in a single cycle. The drone provides live video streaming through the FreeFlight Pro app, although it does not have real-time NDVI mapping capabilities. One advantage of the Disco-Pro Ag is that it comes with the AIRINOV First+ software, a cloud-based agricultural mapping platform that provides detailed reports and actionable insights based on your generated NDVI map.

NDVI mapping using drones can be considered a successful marriage of old and new technology. By harnessing the power of the tried and tested NDVI technology and mounting it on modern drones, we have come up with a farm management tool that allows farmers to work smart rather than work hard. This technology isn’t just for farms – it is also a useful tool for monitoring the health of rainforests and plant nurseries.  In fact, this may be one of the most noble applications of drone technology that we have come up with so far.

Joseph Flynt
I love diving into the latest and greatest in emerging technologies and seeing what they can do. I enjoy running when I'm not thinking about tech.
2 comments
Share now:
8 Shares
YOU MAY ALSO LIKE
SEE MORE