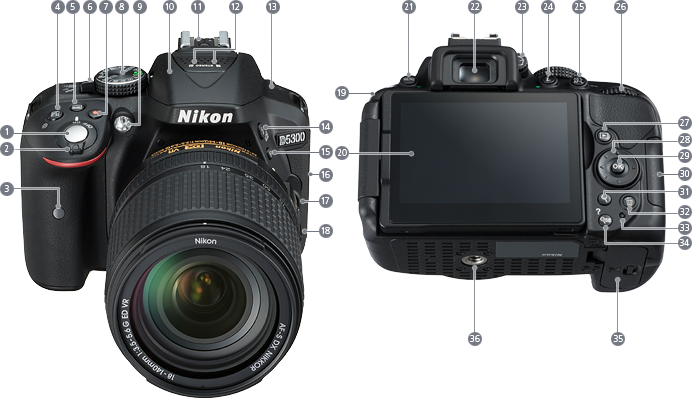 by Joseph Flynt
Posted on March 16, 2018
13 Shares
3D Insider is ad supported and earns money from clicks, commissions from sales, and other ways.
DJI has just released the Mavic Air 2. See all of the specs here.

The Nikon D5300 and Nikon D5500 appear very similar on first glance. However, there are some key differences that set them apart. To make sure you’re getting the best value for money we will lay down what these differences are and which model is best for your purposes.

Throughout this comparison, each camera will be assessed across a range of categories. They will be awarded points, which we will then tally up at the end. We will then give you our impression of which camera is best.

Megapixels are crucial for achieving the highest quality still-shots. Both models have 24.2-megapixel sensors which are powerful enough to take excellent images. This first category is a clear tie.

ISO is a setting that controls the brightness of your photos. The higher the number, the brighter your photos will be and vice versa. The D5500 has a higher max ISO than the D5300 (25,600 vs. 12,800). This allows for clearer images when shooting in low light conditions.

Both cameras have 15.60mm x 23.50mm APS-C sensors. There is no difference in this category and users of either device will have the same level of control over an image’s depth of field.

The latest cameras have effective autofocus technology, which allows users to hone in on a subject quickly. Now, each Nikon device has 39 AF (autofocus) points, so no differences here.

These functions allow photographers to easily focus on subjects no matter where they are in the camera frame. They also allow users to track moving subjects easily.

Burst mode allows photographers to take a rapid string of shots. If you are undertaking sports or actions photography, then burst mode is the ideal setting.

Each camera can shot 5fps when in burst mode. This simply means that they can take five photos per second. Users can then sort through the results to select the best images.

Both cameras use the Nikon F lens mount, which has a whopping 280 lenses available. These give plenty of options no matter what kind of photography you plan on doing.

An individual lens typically costs $50-$100. However, the most cost-effective way to get ahold of them is purchasing a bundle deal. These deals will typically include the camera plus a lens kit and range of other accessories. We will discuss bundle options in the price section.

Both cameras can record full HD (1080p) video at up to 60fps. This makes both devices ideal for those that want more than just still shots. Just be aware that neither model can shot slow-motion video.

Both cameras have 3.2” fully articulating screens with resolutions of 1,037k dots. The difference is that the D5500 has a touchscreen while the D5300 misses out on this feature. A touchscreen makes menus easier to navigate (just like on your smartphone) and saves clunking away on buttons.

Regarding portability, the D5500 is a slight improvement.

GPs is handy for geotagging your photos. The D5300 includes this feature while it was surprisingly removed from the D5500.

Another feature that is present in the D5300 while being mysteriously absent from the D5500 is smartphone control. This feature allows users to control the camera using their smartphone remotely.

Let’s touch on some more strengths that both devices share.

Let’s touch on the not so good things about each device.

The D5300 is the more affordable option.

Let’s tally up the final scores.

You can also compare the specs and features of each model by viewing the table below.

Which Model Should You Buy?

It’s a pretty close battle as both cameras have far more in common than they do apart. If you plan on shooting in low light conditions, then pay a little bit extra to get the Nikon D5500. This device is also more user-friendly with a touchscreen and longer battery life.

If you don’t need to take advantage of the Nikon D5500’s greater ISO range then just save yourself some cash and get the Nikon D5300. You will still find that it is a powerful camera with not much differentiating it from the Nikon D5500. If you like you can put the money saved towards more lenses.

Regardless of which camera you settle on, we recommend getting it included in a bundle. The reason is that these deals are simply the better value for money. You’re not only getting extra lenses, but also SD cards, tripods and a range of other handy goods.