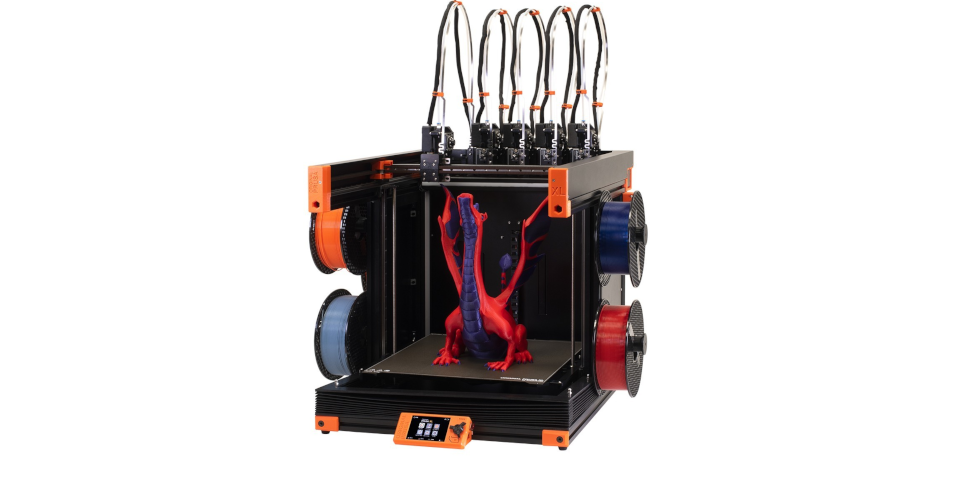 The Original Prusa XL- Is It Worth the Hype?

by Joseph Flynt
Posted on December 14, 2021
19 Shares
3D Insider is ad supported and earns money from clicks, commissions from sales, and other ways.

If you’re a firm believer of Prusa Research AND you can benefit from the large build size and all the fancy technologies of the Original Prusa XL, then you can consider doing a pre-order. However, going in “wait and see” mode is also not a bad idea considering that this printer likely won’t be launched within the next six months.

Prusa Research has recently started accepting pre-orders for the heavily anticipate Original Prusa XL. As the name implies, this is a large-format FDM 3d printer. It also features some of the most modern 3D printing technologies today. Is the printer worth all the hype to justify pre-ordering? 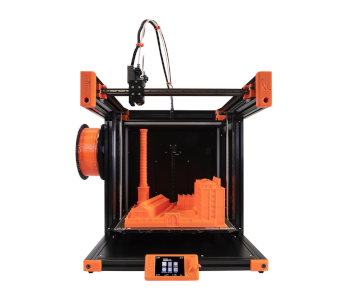 Prusa Research first mentioned the development of the Original Prusa XL in a blog post about the Original Prusa Mini published back in 2019. A few features of the Prusa XL were mentioned in the preview – a CoreXY architecture, a new geared extruder, an improved heated, of a large print volume. The good news is that all those mentioned features seem to have made their way to the final product.

During the Formnext 2021 event, Prusa officially unveiled the Original Prusa XL and opened for pre-orders. It was the first time that an in-depth look was given for this highly anticipated printer after minor details were released over the last two years.

At this point, the question is this – with what we have seen so far, is the Original Prusa XL worth pre-ordering? Who is this 3D printer aimed for? Are the new features worth all the anticipation? To answer these questions, let us run down all the relevant features that Prusa has revealed.

With its namesake, it’s a good idea to start this conversation with the large build volume of the Prusa XL. This 3D printer boasts 36 cm x 36 cm x 36 cm build volume – significantly larger than almost all the consumer-grade FDM printers available today. If you feel like you can maximize the print bed of the Prusa XL, then this is a feature worth getting excited about.

However, Prusa also recognizes that the large print bed may not be needed for every single 3D printing project. With this in mind, the print bed of the Prusa XL has been sub-divided into sixteen 9 cm x 9 cm segments. Each segment can be independently heated, making the printer more energy-efficient for smaller builds.

Another benefit of this ingenious design is that it helps avoid warping. Small gaps between each segment allow for the print bed to expand when heated. This prevents thermal stress accumulation and the warping of the print bed.

The use of a segmented print bed presents the intriguing opportunity of scaling up from the Prusa XL. Perhaps this design can become a standard for large-format 3D printers in the coming years.

Another distinguishing characteristic of the Prusa XL is its CoreXY architecture. The print head still moves along a Cartesian XY plane, but movement in the X-Y directions is controlled by a system of pulleys connected to stationary stepper motors attached to the printer’s frame. This design significantly reduces the weight of the print head and makes simultaneous motion in both the X and Y directions possible.

There are two major benefits to a CoreXY architecture. The reduced weight of the print head means that it can now move faster without the danger of causing inaccuracies and quality issues. The lower number of moving parts also reduces vibrations on the entire 3D printer frame, making it less likely to see quality-related artifacts.

This does not mean that the CoreXY design is perfect. Otherwise, we would have already seen it used more commonly. CoreXY printers are notoriously hard to assemble and require stricter maintenance because of how dependent they are on the state of the motors, belts, and pulleys. It remains to be seen how Prusa has implemented the CoreXY architecture on the Prusa XL and if they have made it more user-friendly. 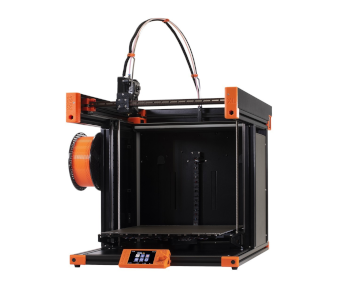 Prusa XL has a newly redesigned extruder with a quite cheesy name – the “Nextruder.” This fancy extruder comes with a few interesting features.

The extruder comes with an extra-large drive gear and a zero-backlash cycloidal gearbox. This allows for a much higher contact area for gear-based transmission, thereby creating a much higher ratio of input to output motion. According to the Prusa XL announcement, the gear ratio of the Nextruder is an impressive 20:1. This should make filament extrusion very precise, possibly allowing for finer layers using appropriate nozzles.

The Nextruder is also a “smart” extruder. There is a dedicated CPU inside the extruder that receives signals from a load cell sensor. With this combination, the Nextruder can perform an automatic bed level calibration. Prusa claims that the Nextruder results in an “always-perfect first layer.”

This Nextruder technology may be one of the biggest game-changers that Prusa has come up with in the Prusa XL. Any boost in the quality or reliability of FDM technology can be a huge step forward for the industry. As we shall see later, the smart features of the Nextruder may be useful beyond just 3D printing.

The Prusa XL has a tool changer for printing with multiple filament types. The automated tool changing mechanism is an optional upgrade that can be done via a built-in expansion port. Prusa has also stated that they have tested the tool-changing mechanism for millions of trouble-free tool swaps and have verified that the system is wear-resistant and that tool alignment calibration proceeds fully automatically.

Each print head of the Prusa XL comes with its own electronic board. Once a new print head is swapped in, the load cell sensor calibrates the tool anew. The Prusa XL can be purchased with up to five print heads with corresponding extra costs. Each print head can be heated to a different temperature, which makes it possible to make 3D prints using unconventional filament combinations.

Prusa has also stated that the load cell sensor of the extruder can automatically detect a jammed nozzle. This would be another amazing feature that can help prevent failed prints. Prusa is planning to add a feature that can detect even a partial jam so that you can step in before the nozzle becomes fully clogged.

There is no word yet if Prusa is planning to create tools aside from filament extruders for the Prusa XL. Laser engravers or CNC tools sure seem like possibilities, especially since other 3D printers already have such an option.

We have already mentioned that you can order the Prusa XL with four other extra print heads should you need them. Prusa will also be selling other accessories such as additional filament spool holders and a removable enclosure. There is no word yet on how much these accessories will cost. 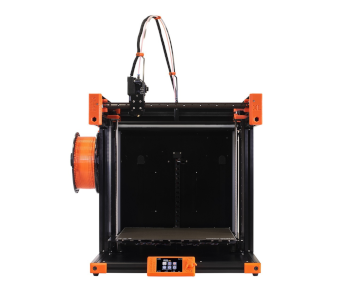 The base model of the Prusa XL will be sold for $1999. This will be a semi-assembled 3D printer with a single tool head. The most expensive bundle will be sold for $3499 with five tool heads and additional hardware to allow for automatic tool changing.

Right now, Prusa is accepting pre-orders for a refundable amount of $200. The company says that the volume of pre-orders will help them the demand for the Prusa XL. Once your printer is ready, you will still have the option of editing the order to change which printer configuration you prefer. The pre-order terms are actually quite buyer-friendly and pose practically zero risk.

When will it be released?

Prusa has stated that the manufacturing of the Prusa XL will start at any point from Q2 to Q3 of 2022. Take note that this is just the start of the manufacturing, which means you may have to wait a few months more before your pre-order can be fulfilled. The “smart” design of the Prusa XL also means that the product is especially vulnerable to the global chip shortage that is affecting everything from mobile devices to heavy-duty trucks.

Realistically, we don’t expect the Prusa XL to start shipping until the later parts of 2022. Just to manage your expectations, there is a chance that you may need to wait for more than a year before you will receive your Prusa XL even if you pre-order.

Is the Original Prusa XL worth pre-ordering?

To be fair, Prusa has gained enough goodwill over the years to deserve their up-and-coming large-scale 3D printer to be positively anticipated. This brand does not seem the type to over-promise and under-deliver. The pre-order terms are also surprisingly favorable to the buyer since it is fully refundable, although $200 is certainly not a small amount.

Pre-ordering is a good way to show your support to the company. You will also be one of the first in line for the printer when it is released and will certainly be an early adopter. Just expect to possibly wait a year or even longer for the launch, since almost every single device gets delayed nowadays.

There is also no harm in taking a “wait and see” stance. The Prusa XL seems to be taking on several new technologies all at once, so the margin of error is also quite large. Being patient gives more time for other users to discover any early problems with the product so that you won’t have to experience them anymore.

However, there is a chance the wait for the Prusa XL can be long and that you won’t be able to snag one at your own convenience. In this case, delaying your decision may mean having to wait a few years.