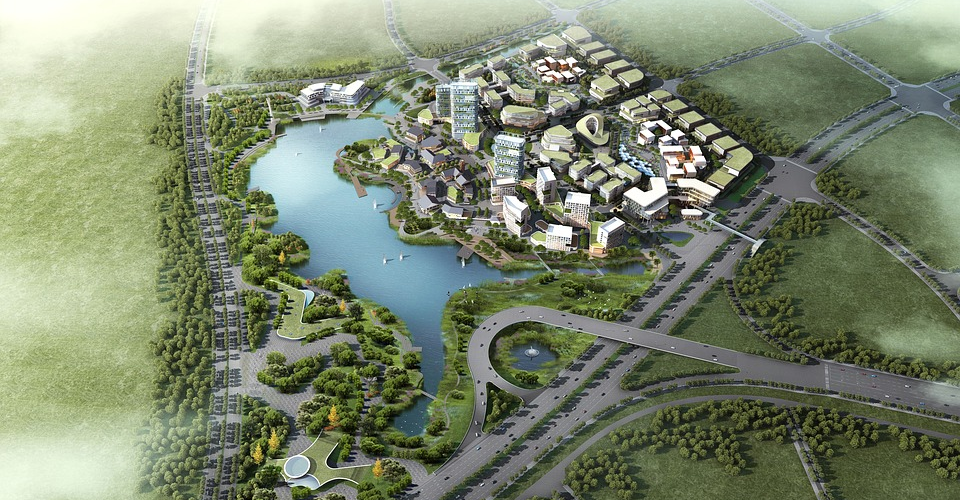 Drone Mapping 101: What is an Orthomosaic Map?

by Joseph Flynt
Posted on May 19, 2019
17 Shares
3D Insider is ad supported and earns money from clicks and other ways.
DJI has just released the Mavic Air 2. See all of the specs here.

A brief history of map projections and distortions 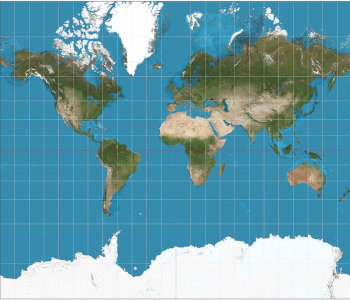 Ever since maps were invented, being able to accurately portray the curved surface of the Earth on a 2D projection has been problematic. By “flattening” the image on a 2D surface, there are bound to be distorted areas and regions on the map.

For example, let’s take the Mercator projection, which is one of the most common world maps and one that is likely familiar to all of us. The Mercator projection prioritizes the preservation of the shapes of map features such as islands. In doing so, it compromises on accurately portraying the size of these islands.

The size distortion is minimal near the Equator but increases at farther latitudes. This has resulted in maps where Greenland and Antarctica appear exceedingly large, especially when compared to landmasses in Asia or Central Africa. Other countries in the northern hemisphere such as Canada and Russia also appear to be much bigger than they actually are.

Maps used for industrial or professional uses avoid this problem by using maps with a smaller scale. Smaller maps, such as those showing just a single country or city, are not as prone to distortion as the curvature of the Earth-surface is not as prominent in a small area. However, there are still distorted areas on any map, no matter the size.

This limitation also applies to aerial images. In drone surveys, photos are typically captured with the camera pointed directly downward. These photos are then stitched together using photogrammetry software. The inherent distortion of any aerial photo increases at areas farther away from the center of the photo, since the appearance of the objects in these areas is captured from an angle. This distortion may seem small, but it can have significant effects on any distance or volume calculations made using the map.

If you are doing drone mapping for commercial purposes, you need a Part 107 license from the FAA.

What is an orthomosaic map? 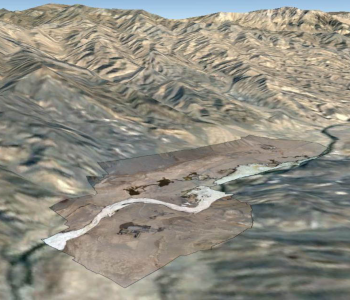 An orthomosaic is essentially a map composed of several orthophotos or orthoimages. As we’ve mentioned, an unprocessed aerial photo has inherent inaccuracies due to distortion. An orthoimage is an adjusted version of the original aerial image that accounts for the distortion due to camera tilt, topographic relief, or lens distortion. This process, called orthorectification, results in an aerial image that has been geometrically corrected such that it allows for true distances to be measured.

Stitching together hundreds of orthoimages also requires more orthorectification to ensure that the boundaries of these images line up perfectly with each other. Basically, the goal is to make geometric corrections to the images to give the impression that the orthomosaic image was captured from an infinitely high vantage point.

How is it created?

The key to the creation of orthomosaic maps is the process of orthorectification. This is the process by which the distortive effects due to terrain and perspective are removed from the image. To create an orthorectified image, you need to start with a couple of elements:

The georeferenced image is basically the raw, unprocessed aerial image where each pixel has been associated with a location based on a global geodetic coordinate system. These are then matched to the relief of a DEM where each point is also georeferenced.

The camera model is essentially a generic equation used by camera sensor manufacturers to determine the relationship between image space and actual object pace. Think of it as the way for the camera to determine where to place individual objects in the images that it produces.

The reconciliation of all these elements produces an orthorectified image. There’s a whole mathematical process behind orthorectification, and most high-level application take either of two possible approaches. The first one, called the black-box or analytical model, alters the RPC of the camera model to change the placement of features in an aerial image.

The physical-based approach (the second option) is a much more complicated and thorough alternative. This so-called rigorous model takes into account specific details about the camera sensor that is only available from its manufacturer, such as its electronic and optical characteristics and how it reacts to atmospheric factors. Although this method yields much more accurate orthoimages, the data it needs may not be immediately available unless you are using a complete turnkey drone mapping solution.

Ground control points (GCPs) play a big role in the orthorectification process. GCPs are selected points in the survey area from which ground-level measurements are made. The location and elevation of these points are determined using high-precision GPS devices. They are then highlighted on the aerial image using high-contrast markers.

The results of individual steps in the orthorectification process are assessed in terms of accuracy relative to the defined GCPs. The simplest way for the error to be determined is via the root mean square (RMS) method, where the straight-line displacement of each orthorectified point is compared to its ‘ground truth’ location. If the error is too high, parameters are recomputed for another round. Thus, the whole process is iterative, repeating until an acceptable margin of error is achieved.

Which industries use orthomosaic maps?

In the field of real estate, every foot counts. Since the cost of properties heavily relies on their sizes, an orthomosaic map that can be used to make accurate distance measurements is a very useful tool for real estate agents.

Aside from its usefulness in accurately pricing properties, a high-quality orthomosaic map is also an effective tool when negotiating with potential clients. The view shot from a drone shows off a property in a way that no photos taken from ground level can capture. Orthomosaic maps are also very interactive, allowing potential clients to zoom in on details that catch their eyes. Even the surrounding environment is put on full display on orthomosaic maps.

Modern police departments all over the world have started to appreciate the value of orthomosaic maps in documenting crime scenes and in the monitoring of areas with a high crime rate. An accurate map can help come up with a tactical response, especially since they can reveal features of the environment that may not be visible at ground level.

Orthomosaic maps have also been used for crime scene prevention. Even when going over crime scenes with a fine-tooth comb, investigators can still miss critical items that can be treated as evidence. A high-quality, detailed orthomosaic map provides an accurate snapshot of the crime scene that can be revisited indefinitely. In fact, these aerial images have proven to be instrumental in the resolution of many investigations worldwide.

In disaster response, a quick fly-around with a drone is a risk-free way of assessing the damage post-disaster. Aside from not having to expose people to unnecessary hazards, damage surveying using drones can be completed at a fraction of the time it would take for responders to go over the area. Much like law enforcement, emergency responders who know the lay of the land can come up with a more strategic approach to resolve the situation.

The agriculture industry is hardly a stranger to the value of drones as data gathering tools. However, there’s a way to reconcile NDVI maps with orthomosaic maps so that the final product reflects crop health at a much higher level of accuracy. This allows for a more targeted response, truly putting the ‘precision’ into ‘precision agriculture.’

Aside from responding to crop problems, an orthomosaic map also allows a farmer to assess how fast their crops are growing. Have they grown over a year? Or was their growth stunted? Identifying these issues allows a farmer to step in and solve the problem. Irrigation can be added to areas that need them, while flooded areas can be remedied with proper water drainage.

Orthomosaic maps are useful in practically all phases of the construction process. During planning, project engineers will be able to assess how much soil they need to excavate and how long the roads that will be built need to be. For projects that require long and narrow corridors such as power lines and pipelines, a good orthomosaic map provides the best opportunity to optimally plan the route of the project to save on the cost of materials and labor.

Once the project is completed, another orthomosaic map can be generated to maintain a record of the ‘as-is’ state. Since orthomosaic maps convey accurate distances both horizontally and vertically, they can be used to compare how a project was planned versus how it was executed in reality. Taking a snapshot of the conditions of a construction site right after completion is a means against potential liability cases, while also acting as an effective marketing tool for stakeholders.

When it comes to environmental conservation efforts, a good orthomosaic map can help in monitoring of critical parameters such as the level of vegetation in an area, the level of water in a lake, and the movement of sand dunes in the desert. Even the movement of wildlife can be monitored. Since orthomosaic maps show precise locations every time, it will be easy to monitor the changes that are happing in an ecosystem and address them right away.

Urban planners and city engineers have big responsibilities thrust upon them. They need to make sure that the city infrastructure can handle the population of a city while also protecting against natural disasters such as floodings and earthquakes. Having a highly accurate, bird’s eye view of the whole city allows urban planners to identify evacuation areas, lowlands that are prone to flooding, choke points in roads that can lead to traffic buildup, and areas with different zoning rules.

Of all the applications of drone technology, drone-based mapping has perhaps one of the highest technical barriers to fully understanding. Aside from learning the special apps and software for mapping, you need to have functional knowledge of GIS and the fundamentals of mapping. Even the most basic terms in mapping could sound intimidating to the uninitiated.

Orthomosaic maps are some of the most common deliverables for commercial drone mapping services. We hope that our explanation on what orthomosaic maps has made it clear why it’s so important for many industrial applications. Fortunately for newbies, there are already a lot of sophisticated software platforms that will do the heavy lifting for you when processing the data collected in a mapping survey. Thus, creating an orthomosaic map may not involve anything more complicated than inputting a few parameters and clicking several buttons.