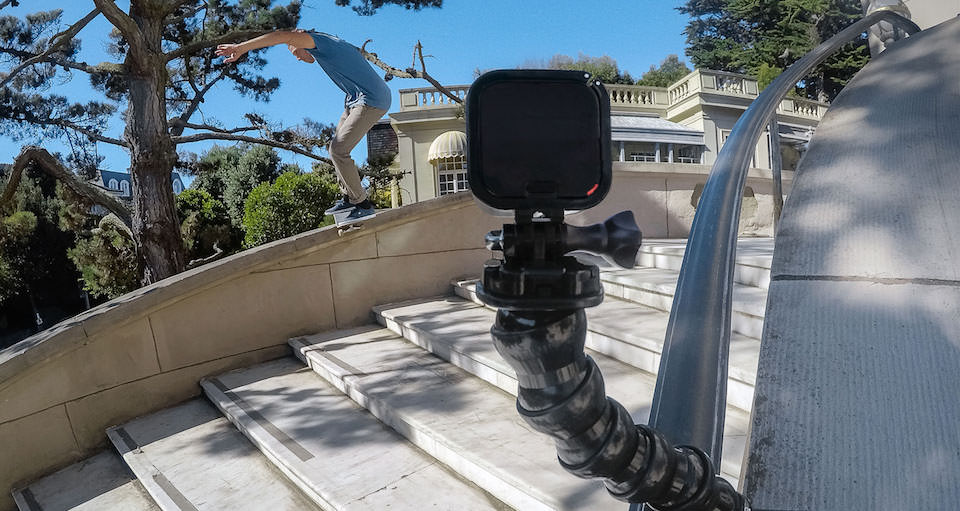 by Joseph Flynt
Posted on January 18, 2018
9 Shares
3D Insider is ad supported and earns money from clicks, commissions from sales, and other ways.

Everyone has heard of the GoPro brand and know that they are high performing cameras for recording footage on the move. However, they are not the only options. DJI’s Osmo range are camera and handheld-stabilizer combos that allow users to capture excellent video and photos.

To determine which is best, you need to carefully consider how you want to use your camera. To help you we have compared DJI’s Osmo range against GoPro’s Hero range so that you can make an informed decision. We will analyze the major specifications and functions of each model.

A major difference between the GoPro range and the Osmo range is their design. GoPro’s are small, lightweight cameras of around 100g. Osmo’s, on the other hand, are large devices consisting of a camera, gimbal, and handle. They weigh around 1kg and are much larger than a GoPro.

All the Osmo and GoPro cameras can shoot in full HD. This ranges in quality from 720p up to the highest setting which is 4K. As you can see below, there are not many differences between devices. Most can shoot 4K at 30fps. However, the Hero 6 Black wins out with the highest frame rate (60fps).

The Hero 4 Session has the worst camera and cannot record at 4K or 2.7K.

Don’t just focus on video. You can also take dynamic photos with your camera. The megapixels for each device are shown below. The higher the number, the sharper the photos that can be taken.

The Osmo Pro is the most powerful camera for taking photos with 16 megapixels. The Hero 4 Session and Hero 5 Session are weakest with 8 megapixels and 10 megapixels respectively.

This is where the Osmo smashes the GoPro. Video stabilization is the prime reason to select an Osmo product. They use a 3-axis gimbal that keeps footage smooth enough to impress a professional filmmaker. The gimbal effectively counteracts any form of motion, including hand shakiness and vehicle movement (if you’re in a car or riding a bike).

Now you may be wondering if it is possible to mount a GoPro to a stabilizer and achieve the same effect. Unfortunately it is not. While GoPro do sell a stabilizer known as the Karma Grip, it is nowhere near as effective as the Osmo system.

+1 for the Osmo range

GoPro’s Hero 4 Silver, Hero 5 Black, and Hero 6 Black come with touch screens. This makes them smooth and easy to operate, just like your phone. The other models require a little bit more effort by mashing on their buttons.

To control an Osmo, you’re going to have to attach your phone to the device’s phone and run the DJI Go App. This can take a little bit of time getting used to, but eventually, you will get used to focusing the camera effectively.

Overall we reckon the GoPro touchscreens are the most user-friendly and you don’t have to risk damaging your phone.

This is a cool feature possessed by the Hero 5 Session, Hero 5 Black, and Hero 6 Black. When you’re on the move, you can issue verbal commands to your device, such as to stop or start filming.

Unfortunately, the Osmo range misses out on this feature. If you happen to try to record outdoor footage on a steep slope and need to hang onto a tree or rock, or otherwise stabilize yourself with one hand, then voice control would have been handy.

GoPros are designed to be used on the go and can hand bumps and scrapes. They come equipped with a protective housing that can handle some decent forces. Don’t expect to throw one off a building, however, if you are doing extreme sports like skiing or mountain biking and have a crash, chances are your GoPro will have only end up with a few scratches.

Osmo cameras are much less durable. They are more designed for taking footage of other people doing dangerous activities rather than actually being involved in the activity.

This is another area where the GoPro range wins out. Each model has a maximum depth of 40m when fitted with their protective housing. What’s best of all is that Hero 4 Session, Hero 5 Session, Hero 5 Black, and Hero 6 Black can go into the water naked and handle depths of up to 10m.

There is also a range of accessories that can allow certain models to reach even greater depths.

The Osmo range is not designed to get wet at all. So if you are filming around water or a storm is approaching then its best to put the device away.

+1 for the Hero range

Both the GoPro models and the Osmo models have a range of accessories available. These include bike mounts, vehicle mounts, and anything else needed to take the devices on your adventures. Don’t forget about spare batteries, microSD cards, and carry cases.

You will notice that there are many different bundle options available so if you do get one make sure you scrutinize the inventory list so that you know exactly what you’re getting.

Shown below is each camera’s current price on Amazon. These are subject to change so check for yourself.

The Hero range is significantly cheaper than the Osmo models.

+1 for the Hero Range

Which One Should You Buy?

First, check out the overall scores below.

What do these results mean? Well, we feel a GoPro is probably most suitable for the typical person. If you want to film a range of activities including extreme sports, watersports, or just going for a walk, then the GoPro has you covered. You can safely take it around water, and it can usually survive being knocked or dropped.

The GoPro model we recommend most is the Hero 6 Black. It has the best camera, not to mention voice control, a touch screen, and a variety of other features. If you are on a tighter budget then just drop down a model to the Hero 5 Black. You will be getting similar features and saving around $170.

If you consider yourself a hardcore filmmaker that requires the best video stabilization, then you may want to consider an Osmo model. Just remember the price tag will be noticeably higher.