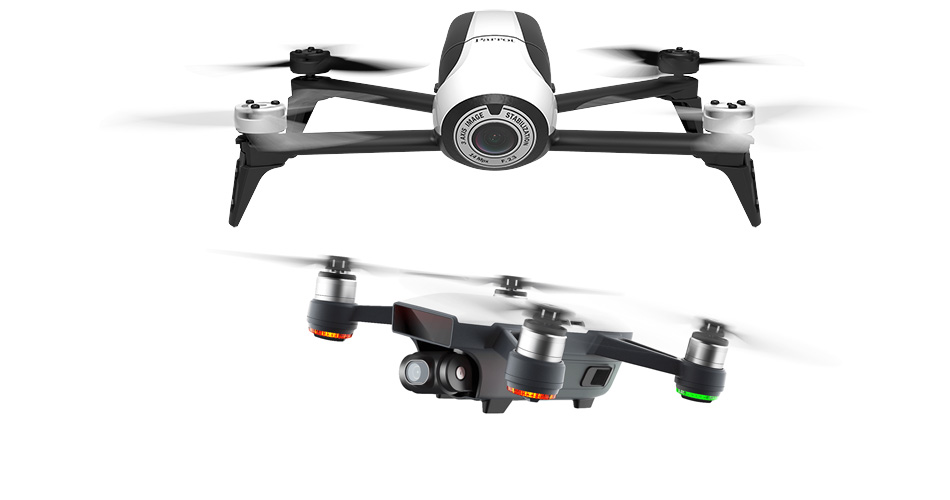 by Joseph Flynt
Posted on December 24, 2017
13 Shares
3D Insider is ad supported and earns money from clicks and other ways.
DJI has just released the Mavic Air 2. See all of the specs here.

The battle is on between two of the leading mini-drones on the market. Both are small, affordable, and offer an easy way to get flying. But which one is the best? Well, we have compared the crucial specs and functions to find out.

Current Amazon prices are $550 for the Spark and $450 for the Bebop 2. These are for new models with controllers. Of course, it’s best to see for yourself as the prices always change. Also, you can avoid sales tax by buying from DJI.

Both drones are tiny and can almost fit in your pocket. This makes them highly portable no matter where you are going. The Spark weighs in at 300g while the Bebop 2 is 500g. Not a lot of difference, however, the Bebop 2’s additional weight helps it stand up to higher winds (more on this later).

The Spark has a 12 Megapixel camera which can shoot 1080p video at up to 30fps. This isn’t exactly a powerful camera as far as drones go, however, it will still do the job. Now, the Bebop 2’s camera isn’t much of an improvement. It has 14 megapixels but the same 30fps at 1080p. Overall not a significant difference. Each camera will take decent photos and film in HD. However, professional and semi-professional filmmakers and photographers may want to look elsewhere.

Both drones are lightweight machines, but they can still be flown in windy conditions. The recommended maximum wind speeds for each drone are 22mph for the Spark and 24mph for the Bebop 2. Now, these are just recommended maximums. Many users have reported flying them in much stronger conditions. However, the battery will drain much faster, the camera will be less stable, and the risk of a crash is significantly increased.

The Spark wins out here with its dedicated obstacle avoidance system. When turned on the system will detect any obstacles, such as building, branches, and fences, to automatically prevent the drone from crashing into them. Even if you were to fly directly at a tree, the drone would automatically stop before impact.

Unfortunately, the Bebop 2 misses out on this technology.

The Spark hovers in place better than the Bebop 2. Why? Because it has a vision positioning system that can effectively determine its location when low to the ground. This gives a much higher accuracy than using GPS/GLONASS.

The Spark can be flown controller-less, just by using hand gestures or the DJI APP. However, we don’t recommend it. It is a novelty at first to wave your hands and have the drone take off and fly around but to utilize its full potential you need to purchase a controller. You can either buy one separately or get it included in a bundle deal. It doesn’t matter how you get it, just make sure you do.

Once you bring the controller into play the Spark’s operational range increase from 100m to 1.2miles. This is pretty important if you actually want to fly anywhere. You will also be getting two control sticks and a variety of dedicated and customisable buttons. Don’t forget about the sports mode button. This will allow the drone to hit its top speed of 31mph.

The Bebop 2 can also be flown without a controller, and once again we don’t recommend it. Users can control it entirely using the FreeFlight Pro App on a smartphone or tablet. However, the range and functions are severally limited. Just like the Spark, you need the controller to hit a max range of 1.2 miles.

We would like to touch on some key functions that both drones have in common. Firstly, they both use GPS and GLONASS positioning. This helps them navigate effectively and gives them access to the maximum amount of available satellites.

Both drones have the “follow me” and “return home” functions. These can be operated through the DJI App and are pretty self-explanatory.

Each drone has a range of intelligent flight modes for taking photos and videos from a variety of angles. The Spark’s modes include:

The Bebop 2’s modes include:

The names may be different, but each drones’ modes function quite similar.

Let’s check out the total scores. And remember we have given the Spark two points for its obstacle avoidance capabilities because we reckon they extra important.

While the Bebop 2 is the points winner, just remember it is only marginally ahead in most areas.

The table below makes things simple by comparing the main specifications and features.

It’s a tough choice. Both mini-drones are very similar across a range of specifications. While the Bebop 2 has the overall top score, there is still not that much difference. They are both portable, have similar cameras, and have the same range. The Spark’s best feature its obstacle avoidance systems, while the Bebop 2 is the clear winner in flight time.

Now the Spark may be $100 more, but we think its obstacle avoidance system make up for this. This will reduce the chance of crashes and possibly save you money in the long run.

If you are new to flying then getting the Spark is probably the best idea because its obstacle avoidance can keep it safe from user error. Those who already have experience flying drones may want to get the Bebop 2 instead.

Before you go, we should mention that neither the Spark or Bebop 2 has a top of the range camera. If taking the best aerial photos and videos are your main reason for purchasing a drone then you may want to consider some of the other models on the market, such as the DJI Phantom 4 Pro or Inspire 2. If portability is your top concern, then the DJI Mavic Pro comes with a 4K camera with a foldable design.