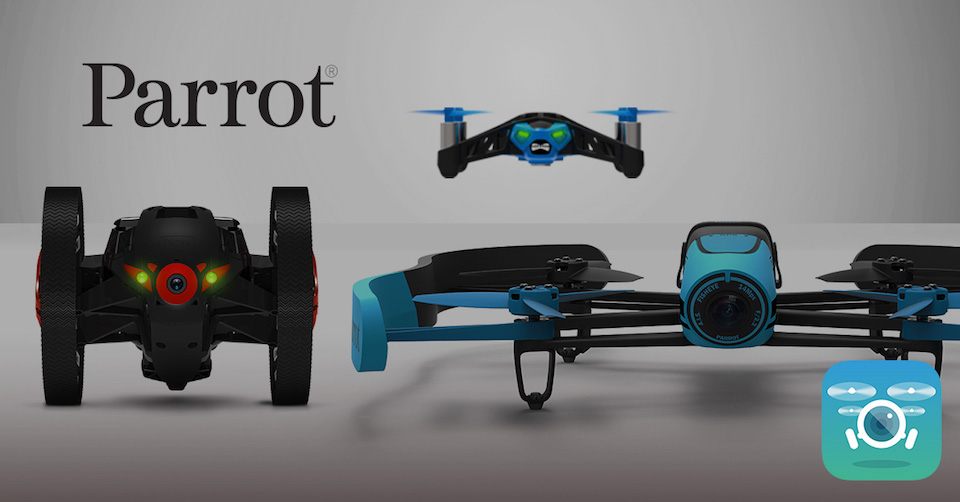 by Joseph Flynt
Posted on January 9, 2018
6 Shares
3D Insider is ad supported and earns money from clicks and other ways.
DJI has just released the Mavic Air 2. See all of the specs here.

Parrot has a range of fun and innovative drones on the market. These come in a variety of different designs which can make it hard to choose amongst them. That’s why we have done a thorough comparison of each models’ pros and cons so that you can choose the best machine based on your requirements and budget.

Parrot’s drones come in all shapes and sizes so we would like to give an overview of them.

First up are the Bebop drones. These are basically your standard quadcopter, with four propellers, the ability to take off and land automatically, and the power to fly long distances. When most people think of a drone, they normally think of something like the Bebop range, as these models follow a fairly typical design.

Now the Mambo and Swing are similar to the Bebop drones but much smaller. They are designed to be mini-drones with much less power than standard drones. Think of them as a toy that can only be flown in your backyard.

While the Mambo is purely a quadcopter, the Swing can actually function as both a quadcopter and a plane. This design causes it to look like a ship straight out of Star Wars.

Last up is the Disco. This functions as a fixed-wing drone (plane!). And a big one at that with a 45″ wingspan. Unlike the other drones, the Disco can’t take off automatically. You have to start the motor and then throw it (which takes a bit of practice). It also can’t hover in place (doesn’t have rotors) and when you do fly it, you will need a large open space.

Unless you have regular access to a large open space (you live on a farm) then you will have very limited opportunities to fly the Disco which we feel makes it unsuitable for many people.

Overall the Bebop drones are by far the most versatile.

The Bebop range and the Disco have the most powerful cameras by a wide margin. They can take sharp, crisp photos with a 14-megapixel camera and record in HD.

The Mambo and Swing are not really designed with photo and video capture in mind.

Take a look at each drones’ flight capabilities below.

You will notice that the Disco has a noticeably greater flight time and max speed when compared with the other models. This is mainly due to it being designed as aerodynamically as possible (its built like a plane).

The Mambo, Swing, and Bebop come in last with low flight times and speeds.

The range is how far each drone can fly while still receiving commands from its controller. The maximum ranges (only possible in ideal conditions) are shown below.

As you can see the Mambo and Swing have very short ranges, and won’t go far beyond your backyard. The rest of the drones have a significant 1.24-mile range.

This category is a no-brainer. If you want a small, light, portable drone, then the Mambo and Swing mini-drones are the best option. They can fit in your pocket or a small bag and be taken anywhere with ease.

On the other end of the scale is the Disco this is not only heavier but also has a massive frame and wingspan, making it the most cumbersome to transport.

Some Bebop drones come in bundles that include the Parrot Skycontroller 1. This has a range of dedicated and customisable buttons, two steering sticks, and the ability to have a smartphone or tablet mounted right in its center. It functions well but is a bit bulky.

That’s why Parrot designed the Skycontroller 2. This is much smaller and looks similar to an X-box controller. It is portable, ergonomic, and easy to use for anyone who has ever played a video game. There is also a mount at the top for attaching a smartphone or tablet.

If you do end up getting a Bebop drone make sure you check which controller is included. Oh, and let’s not forget the Disco also makes use of the Skycontroller 2.

The Mambo and Swing make use of the Parrot Flypad. This is another small, portable controller that looks similar to that of an X-box/Playstation. There is a small mount for attaching smartphone (but not a tablet).

Overall it’s hard to pick an overall winner in this category.

None of Parrot’s drones are equipped with automatic obstacle avoidance systems. This isn’t a big issue except when it comes to the Disco. This drone can’t hover in place, land, or stop like the other models. This means a very large open space is required. The Disco is also a lot faster meaning that if it does collide with an obstacle, then the damage is likely to be greater.

The Bebop range and the Disco can handle high winds of 24mph or more. Obviously the stronger the wind, the higher the change of a crash. If users do experience trouble controlling their drone due to wind speed then they the should abort their flight.

Now the Mambo and Swing, being lightweight mini-drones, can’t handle the same wind speeds. We only recommend flying them in 20mph at the very most. Even this can be risky, so take it easy with these drones.

We will quickly explain the different positioning systems available. Now everyone has heard of GPS but have you heard of GLONASS? This is Russia’s version of GPS and drones equipped with dual GPS/GLONASS position can connect to a greater number of satellites, which makes it easier to calculate their position with precision.

We are glad to say that each drone includes both GPS and GLONASS. No overall winners here.

Each drone comes with a variety of intelligent flight modes. The Bebop range includes:

The Disco can also utilize the Flight Plan and Follow Me modes.

The Mambo has three main modes

The Swing’s modes include:

Overall each drone has a variety of different modes to suit different flying styles, and there is no overall winner. In fact, the range of modes across all the Parrot models is so comprehensive it would take another entire article to describe them all.

These are the approximate Amazon prices for new models that include a controller.

As you can see the Swing and Mambo mini-drones are the most affordable by far.

Tallying Up The Scores

The Bebop 2 Power is our top pick. While it has the same score and is overall very similar to the Bebop and Bebop 2, there are some key distinctions. It has a longer flight time than the Bebop 2 and Bebop, as well as a higher speed than the Bebop.

Now it lacks the speed and flight time of the Disco. However, we think that’s its versatility makes up for that. The Disco, while being powerful, cannot take off on its own, can’t hover, and needs a football field worth of space. If you live on a farm then perhaps the Disco is a good option, but for the typical person, we recommend the Bebop 2 Power.

This battle is obviously between the Mambo and Swing. Now while they are both fun and affordable toys, that serve as a nice entry into the drone world, we reckon it’s best to go with the Mambo. It can capture video and has a longer flight time and range.