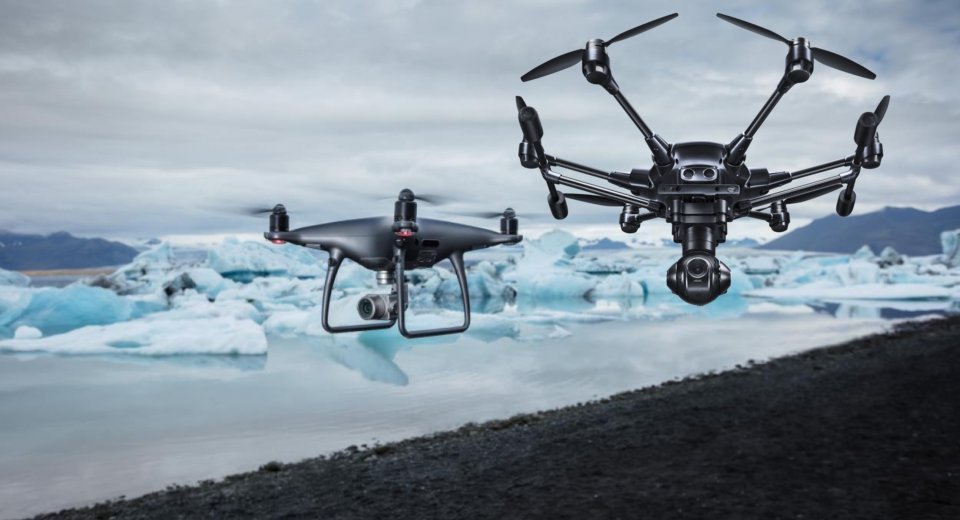 Phantom 3 and 4 (Advanced and Pro) vs Yuneec Typhoon

by Joseph Flynt
Posted on December 30, 2017
21 Shares
3D Insider is ad supported and earns money from clicks and other ways.
DJI has just released the Mavic Air 2. See all of the specs here.

Do you want to get flying but don’t know where to begin? We have comprehensively covered DJI’s Phantom and Yuneec’s Typhoon drones to determine which is the best purchase. Let’s get straight down to business.

Now you will notice that some drones shot in 4K while others can only reach 2.7K. This refers to the quality of the video footage. While both 2.7K and 4K are both considered high-definition, it is 4K that is noticeably better.

As you can see from the table the most powerful cameras belong to the Phantom 4 Advanced and Pro. 20 megapixels allow for sharp, crisp photos while being able to shoot 4K at 60fps makes for extremely high-quality video footage.

These specs are pretty self-explanatory. Flight time is the maximum time that a drone can stay airborne. Speed is the top velocity obtainable (in ideal wind conditions). The range is the maximum distance each drone can travel before losing the connection with its controller. These distances could be noticeably shorter depending on interference.

As you can see the Phantom 4 range outperforms the Typhoon range in all three areas. In fact, it smashes it. Especially the Phantom 4 Advanced and Pro.

Now the Phantom 3 range has a similar flight time to the Typhoon range, but a greater top speed. The Phantom 3 Advanced and Pro also have a much further range.

Let’s not forget about Satellite Positioning. All drones, except the Phantom 3 Standard and Typhoon Q500 4K, have both GPS and GLONASS positioning. This allows them to connect to the maximum amount of satellites and calculate their position with the highest accuracy.

One more thing. The Typhoon H and Typhoon H Pro both have the ability to fly with only five (of six) rotors working. The other drones only have four, and should one break down, they will simply crash.

+1 for the Typhoon H

The table below shows the max wind speed that each drone can safely fly in. Of course, safety is somewhat subjective. Many users have reported flying in harsher conditions, but it is not recommended.

Not a lot of difference here, however, the Typhoon models do come out slightly ahead. This is due to their greater size and weight.

+1 for the Typhoon H

The Typhoon and Phantom controllers are similar in many ways. They both have a range of dedicated and customisable buttons, as well as two control sticks. Most users will find them fairly compact, portable, and ergonomic.

Now the big difference is the Typhoon controllers have a built-in screen for viewing the flight feed and issuing commands. The Phantom models require a tablet or smartphone to be mounted on the controllers. This isn’t necessarily an advantage or disadvantage, as some users may prefer using their smartphone or tablet.

The only letdown is that the Phantom 3 Standard uses an older controller version, which only has a mount large enough to fit a smartphone, not a tablet.

Overall it’s hard to pick a winner in this category. To each their own.

Each drone has a variety of intelligent flight modes. The Phantom range includes:

The Typhoon ranges include “Follow me,” “Point of Interest,” and other similar modes such as:

Overall not a significant difference. Every drone features a variety of different flight modes and its difficult to fully compare each one. Just be aware that to use the Phantom range’s modes you will need to download the DJI App onto a smartphone or tablet.

These are the approximate prices currently on Amazon, for new standalone drones. Have a look for yourself to see the latest deals.

+1 for the Phantom 3 Standard

First off let’s see the scores.

If you’re considering the Phantom 3 Pro then stop right now. Just get the Phantom 4 instead. It’s similarly priced but has obstacle avoidance and better flight capabilities.