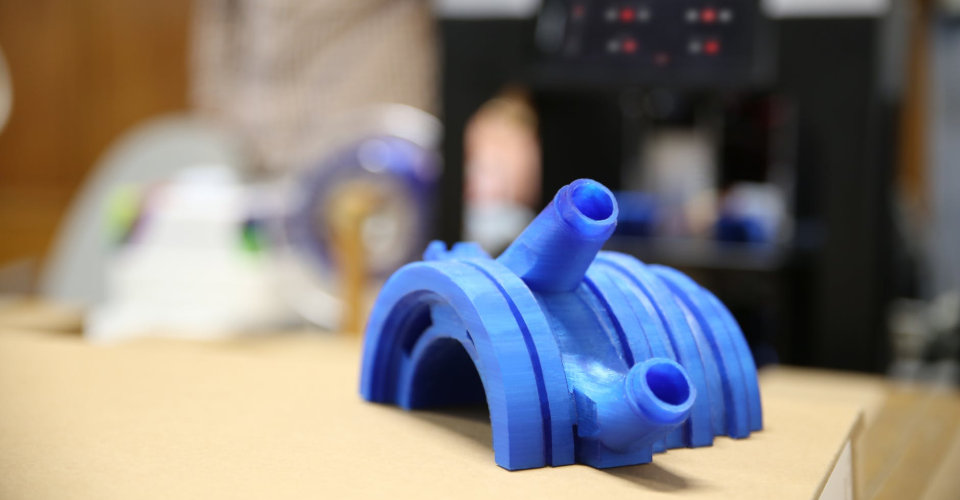 Pillowing in 3D Prints: What Causes It and How to Avoid It

by Joseph Flynt
Posted on December 11, 2019
25 Shares
3D Insider is ad supported and earns money from clicks, commissions from sales, and other ways.

3D printing can be a challenging, and sometimes frustrating, process of constant troubleshooting. Different filaments and printing conditions can produce unexpected results, and getting the perfect print may take a series of small tweaks here and there.

One of the most common problems that 3D printing professionals and enthusiasts encounter is pillowing. Even if you’re unfamiliar with the term, you’ve probably seen signs of it: an uneven top surface with gaps, bumps, or unexpectedly rough edges. What causes this problem and how can it be avoided?

The reason why pillowing can be a particularly frustrating problem is that it only comes up when the top layer is being printed – in other words, when the print is always completed. With so many hours of work potentially going to waste, pillowing is a problem that is worth anticipating and understanding so you can take the precautions to avoid it. What causes pillowing anyway?

1. Warping of the top layer

The main culprit behind pillowing is a phenomenon that should be familiar to anyone who’s ever dabbled in 3D printing – warping. In this case, it’s warping of the top layer which causes deformation. The reason for the uneven distribution of filament material in the top layer is that it tends to get drawn around the infill layer that sits right below. At times the warping can get so bad that gaps form at the top layer, revealing holes that go all the way to the bottom layer.

Since pillowing is mainly a warping problem, it stands to reason that it gets even more pronounced when printing with high-temperature filaments. ABS and Nylon are the two most common problematic filaments in this regard. The large temperature drop when these filaments get extruded makes warping more pronounced – an issue that you’ve probably had to deal with on the print’s first layer.

On one hand, it’s irritating that you still need to deal with warping when the print’s almost done. On the other, this only means that you’re more equipped to deal with the same problem.

Soft filaments, such as TPU, also have a higher tendency to run into pillowing issues, despite being printed at lower temperatures. This is primarily a problem of the top layer not developing enough rigidity to hold its shape and prevent warping.

Tips to solve the pillowing problem

With the knowledge of what causes pillowing, avoiding the problem altogether actually seems a lot simpler. There are several solutions that you can try out, and you might need a combination of these methods to ensure that your prints don’t get ruined at the home stretch.

The easiest way to solve the pillowing problem is to simply increase your infill settings, effectively creating fewer gaps between solid layers where the top layer can warp. A denser infill structure also provides more robust support for the top layer which prevents any filament material from sagging down before developing rigidity.

For most prints, a starting infill setting of 12% is generally recommended for most builds. If you are dealing with problematic filaments such as ABS or TPU, you may want to increase that to a maximum of 25%.

There are a couple of consequences to taking this “easy” route: you will inevitably be using up more filament, and your print will take much longer to finish. However, these drawbacks can be easily justified if you can avoid costly rejects by getting the settings right the first time. However, many 3D printing professionals still consider this solution as the last resort.

Another quick fix is to simply increase the layer thickness for the print’s top layer – up to five or six times thicker than the other layers. This works because a thicker layer provides better resistance to mechanical stress due to cooling, thus hopefully preventing warping. In fact, this is a technique that also applies to any warping issues with the first layer.

Obviously, a thicker layer uses up more filament material, but this a much more conservative option than increasing infill settings. It does not have the same level of certainty, though, and you might need to play around with the settings a bit to find the perfect layer height.

The problem of pillowing can be easily avoided if the top layer can develop rigidity as quickly as possible. The solution is rather simple: make sure that the cooling fan settings are set to a maximum by the time you print the top layer. In some cases, the cooling fan of the printer might not be enough, which is why some professionals have to resort to using desk fans to avoid pillowing.

This is likely the most complex solution you can take to address any pillowing problems. By decreasing the printing temperature to as low as possible to still allow the filament to be extruded, you are reducing the thermal stress of the material as it cools down and lets it become rigid a little faster.

This one-two punch should be more than enough to avoid pillowing, although you’ll need to keep in mind that you will also need to adjust the printing speed of your top layer to match the lower printing temperature. Failure to do so will likely result in extrusion problems. You would not want to have to deal with a clogged nozzle when your print is just about finished.

Lowering the printing temperature may lead to layer adhesion problems, but this should not be as much of a problem if you’re only doing it for the top layer.

This is a sort of unconventional solution, but you can increase the separation distance of the print head from the build platform when it’s time to print the top layer. This helps the top layer cool down faster by moving away from the hot nozzle and giving the filament more time to lose some heat before it hits the build platform. This may require a good amount of trial and error before you can get the perfect print head settings, which is the reason why this method is not commonly done.

Print quality issues are par for the course in 3D printing. There are a lot of things that can go wrong, but also a lot of tweaks that you can do to set them right again. As with many other 3D printing issues, developing an understanding of why pillowing happens is the key to coming up with the best solution. At its very core, pillowing is a warping issue, so the usual remediations to prevent warping should work just as fine to avoid the problem.

Pillowing can be particularly severe if you’re printing at high temperatures or using a soft filament. Fortunately, the solutions we’ve listed above are all quick fixes. They just take a few changes in the settings of your printer. At worst, you may need to haul a desk fan to your 3D printer to help cool down the top layer. None of these are particularly challenging, and you can combine two or three of these measures to get the best results.