by Joseph Flynt
Posted on November 7, 2022
27 Shares
3D Insider is ad supported and earns money from clicks, commissions from sales, and other ways.

The Positron V3 is unlike any other 3D printer that we have seen so far. The fact that all its parts fit inside the box for a filament spool is already intriguing, but there are a few other things that make this 3D printer unique.

The packaging and branding of the Positron V3 have earned widespread interest in the 3D printing community, but how well does it perform? How does this 3D printer work anyway?

Build your own printer 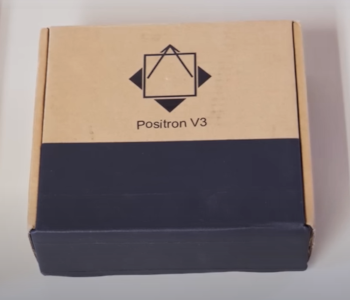 If you do any research on the Positron V3, one of its more oft-repeated features is that all its components fit inside a 1-kilogram filament box. This is certainly a unique value proposition that instantly makes the Positron V3 stand out in today’s 3D printing market.

One thing that should be emphasized more is the fact that you cannot buy this box off the shelf. Instead, the designer of the Positron V3 has made all design files available via GitHub so that anyone can build the printer from scratch. While this isn’t the first DIY 3D printer build ever created, this is certainly the one with the smallest footprint.

With growing interest in the Positron V3, it likely is only a matter of time until someone offers to sell these as fully built kits. It is quite a daunting project, after all. The design files are under a Creative Commons license and allow for commercial use. If you’re up to the challenge, then we suggest looking at the build instruction on the GitHub page.

From the components in the box, the designer claims that it only takes about a minute to assemble it into a fully functional 3D printer. Another unique aspect of this 3D printer is that it’s a filament-based printer that prints upside-down, similar to many resin printers.

There are a lot of design considerations that went into the Positron V3. The designer aimed to make the Positron V3 three things – Compact, Fast, and Portable. A YouTube video by KRALYN (the designer) goes into a narrative of the multiple iterations of the design process. The story of the development of the printer is quite engaging.

KRALYN made three high-level design decisions in a bid to attain the goals of the build:

The Positron V3 has a build volume of 180 x 185 x 180 mm, comparable to many consumer-grade desktop-scale 3D printers. It has a max print speed of 250 mm/s and a travel speed of 400 mm/s. This is impressively fast and significantly faster than many other 3D printers based on the Cartesian axes. Based on its maximum nozzle and print bed temperature, the Positron V3 is best used for rapid prototyping with either PLA or PETG.

The decision to design the 3D printer to print upside-down kept the mass of the 3D printer low. This makes the 3D printer less prone to excessive vibrations, even when the print head is moving very quickly. This also simplifies the overall design of the 3D printer as it no longer needed a large, rigid frame to support the gantry. As we shall see later on, print quality does not seem to have diminished because of this design choice.

The design of the hot end is unique in that it features a 90-degree turn from the extruder to the nozzle. This allows for the hot end to be held flat, reducing the printer’s vertical footprint. It features a NEMA motor and has a high flow rate comparable to the E3D Volcano.

The hot end can reach a maximum printing temperature of 250 C. It has a dual cooling fan, resulting in better overhang and bridging performance even when printing at high speeds. The choice of the NEMA motor also helped make the hot end extremely light, giving way to high travel speeds without sacrificing accuracy. 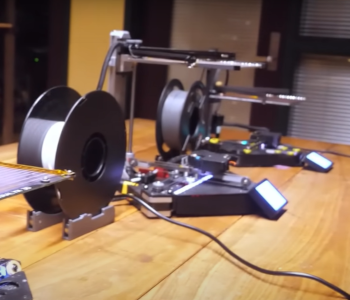 The movement of the print head is via the rotation of two motors, located at the extreme ends of the printer. Instead of belts, the motors and pulleys are connected via syncromesh cables. These are innovative motion transfer cables that can work across different axes, making it possible for gears to rotate in different planes. This heavily simplified the design of the printer, further minimizing its vertical footprint. Decoupling the motors also reduces the mass on the print head, reducing inertia that can cause motion inaccuracy.

The print bed moves along a single vertical frame driven by a NEMA motor. The choice of the NEMA motor instead of a worm gear was another design choice that eliminated the problems of Z-banding. The build plate is mounted on the vertical gantry by a single aluminum arm.

The build plate of the Positron V3 is made of borosilicate glass. It was deliberately designed to be transparent to make it easier to monitor the status of the first layer, as well as the rest of the print. Heating strips run across the entire surface of the build plate, allowing for consistent heating. Power to the heating strips is supplied via an easy-to-connect magsafe connector.

Despite printing upside-down, the designer claims that there are no bed adhesion problems in the Positron V3. When heated, prints stick very well to the print bed. Removal is best done by allowing the print bed to cool down.

The printer features automatic bed leveling through level sensors. This was a feature that the designer considered non-negotiable, especially considering how the printer was meant to be disassembled and put together repeatedly.

The printer has an SKR PICO controller board, which is perfectly compatible with its small footprint, and runs on Klippe firmware. There is space on the bottom frame of the printer for a Raspberry Pi board.

A full-color touchscreen comes included with the printer and can be easily clipped on its front side. With Wi-Fi capability, the Positron V3 can either connect your home Wi-Fi or transmit its own Wi-Fi signal. This means that you can control and manage projects on the printer as long as you are in its vicinity even if there isn’t a Wi-Fi network available. This ties into the printer’s portable, deploy-anywhere design.

Lastly, the printer features RGB lighting that acts as status indicators and accent lights for when it’s printing in the dark. It also looks really cool with all the lights activated. 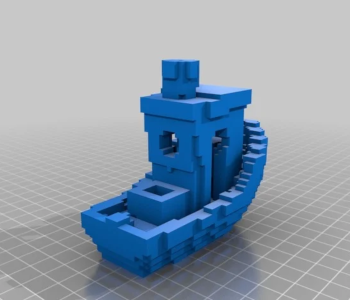 Of course, the measure by which all these creative design decisions will be judged is in their print quality. The printer is not commercially available yet, so there are not many results that we can use to determine the quality of its output. Instead, we will have to rely on the results shown by the designer.

It certainly seems that bed adhesion is not a problem with the Positron V3, as long as you stick to the prescribed filament types. The designer showed many clips of the Positron V3 printing challenging designs, including bridging tests, overhang tests, and a lattice torture test. It was successfully able to print a clearance test up to clearance of 0.2 millimeters.

The future of Positron V3

If there is enough interest for the Positron V3, then it’s perfectly reasonable to expect that it will be available eventually as a fully manufactured kit.

In any case, the innovative design decisions made for the Positron V3 feel like a great stride towards making lighter, more portable, and faster 3D printers. KRALYN certainly made a 3D printer that challenges the convention of what a 3D printer should look like – especially in an era where most 3D printers look like Ender 3 clones.

The Positron V3 features technologies and design principles that we have not seen in other desktop-scale 3D printers. If it performs well, then there’s a good chance that some of the elements may find their way into newer 3D printer models. After all, all the design files are out there for everyone to use.

The Positron V3 is one of the more unique 3D printers to be developed in the last couple of years. Instead of adding more advanced features, this is a 3D printer that has been stripped back to be as lightweight as possible and to focus only on the fundamentals.

The Positron V3 may be the first high-quality 3D printer to be truly considered portable. It is lightweight, compact, and easy to assemble. This printer has set the new bar for making portable 3D printers and shows that quality does not need to be compromised for compactness.