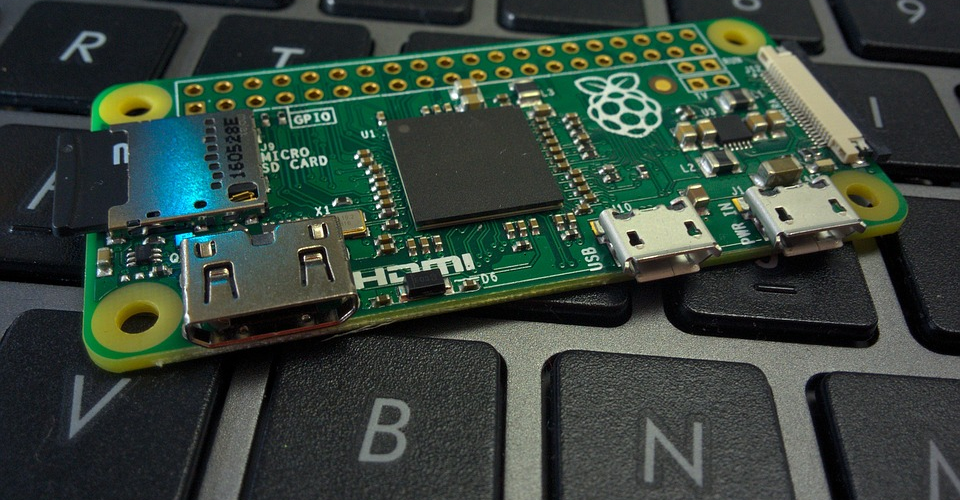 by Joseph Flynt
Posted on November 24, 2020
11 Shares
3D Insider is ad supported and earns money from clicks, commissions from sales, and other ways.

Most of us may still hold a mental image of computers as the usual PC or Mac desktops and laptops that can be found in practically household or office. Even more prevalent is the idea of robots being large industrial machines that are useful only for expansive work that humans cannot perform. However, the reality is that computers and robots can be reduced to such a small size – even to a single board. This is precisely the technology that Raspberry Pi offers.

What is Raspberry Pi?

Simply put, the Raspberry Pi is a single-board computer, or an entire computer that fits in the palm of your hands. Despite the size, a Raspberry Pi board contains all the essential elements of a real computer, including a process, RAM, standard USB ports, and input and output ports and pins for audio, video, and various electrical components.

You can just about anything that you can do with a standard computer on a Raspberry Pi computer, such as word processing or surfing the Internet. It’s also compatible with standard computer peripherals like monitors and keyboards. However, the primary purpose of a Raspberry Pi is as a tool for learning about coding, robotics, and electronics. By providing an interface for various sensors and motors, the Raspberry Pi is able to provide a simpler but more comprehensive learning environment than the standard desktop or laptop.

Raspberry Pi computers have become so popular that they have become the third highest-selling computers, right behind PCs and Macs. These tiny computers have become integral components of several different industries such as manufacturing, automobiles, aerospace travel, and sophisticated home appliances. If you own any sort of smart device, then there’s a good chance that there’s a single-board computer embedded somewhere in there.

Why buy a Raspberry Pi alternative?

With the success and reputation earned by the Raspberry Pi brand, why would you look for an alternative? The answer is simple. Raspberry Pi practically paved the way for single-board computer technology, prompting several other brands to come up with their own versions.

Despite coming into the market later than the Raspberry Pi, some of these alternatives could give the Raspberry Pi brand a run for their money. Depending on what you need, you can get a single-board computer that’s more powerful or one that offers compatibility with more uncommon electrical components. They can also be smaller or cheaper.

The 5 best alternatives to Raspberry Pi 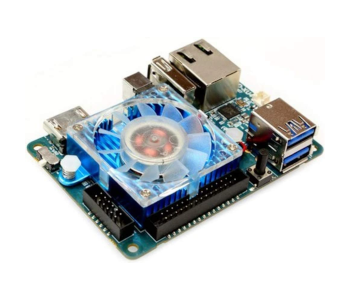 The XU4 board is extremely versatile, able to run Ubuntu and Linux operating systems, as well as various flavors of Android systems. The Exynos5422 Cortex 2 GHz and Cortex A7 CPUs provide very powerful octa-core processing, while fast data transfer speeds are delivered by the Gigabit Ethernet, eMMC 5.0, and USB 3.0 modules.

This board has become very popular among the gaming community because it’s one of the few that can be used for N64, Dreamcast, and PlayStation Portable emulation. This is a remarkable feature for the XU4 notably because emulation of these systems is not possible with the Raspberry Pi. You can even use USB versions of the classic controllers for these gaming consoles, allowing you to fully recreate the experience of old-school gaming.

The Odroid XU4 isn’t very expensive, but the drawback is that you’ll need to get a separate eMMC chip to get the board to boot. With the eMMC card, the minimum cost of the hardware you’ll need for the Odroid XU4 can easily go upwards of $100. If you’re not comfortable spending this amount for a single-board computer, then you might want to look for an alternative that requires only an SD card to boot. 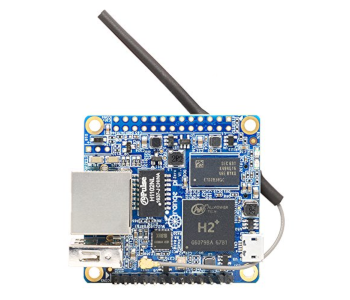 If you’re on a really tight budget, you can still get a single-board computer for about $20. The Orange Pi Zero is absolutely one of the cheapest single-board computers we have seen, but it’s not one that we can recommend for complete beginners. It’s also a bit smaller than a Raspberry Pi Zero, making it a good choice if you need a board with a small footprint.

The Orange Pi Zero comes with a Cortex A7 1.3GHz quad-core CPU, an ARM Mali GPU, 1GB DDR3, and interfaces for HDMI, Ethernet, and a standard 40-pin GPIO. The board has good operating system compatibility, able to work with Ubuntu, Rasbian, Debian, Linux, and Android systems. It has WiFi and Bluetooth capabilities, although several users have reported that its wireless communication capabilities are quite problematic.

The reason why we’re not recommending the Orange Pi Zero for beginners is that it’s definitely not as user-friendly as the other single-board computers in this list. First, there’s the fact that the board runs hot very quickly, making it necessary to install a heat sink (which is not included). It also doesn’t work very well with a low-ampere power source. Even if you can hook it up to a proper power source, the board appears dead until you load an operating system via an SD card. 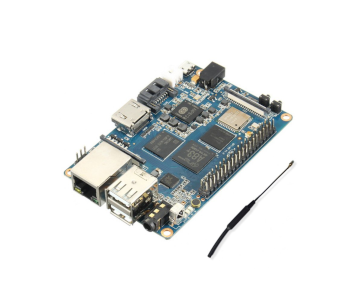 The hardware of the Banana Pi M3 is quite impressive: an A31S ARM Cortex-A7 quad-core processor, a PowerVR GPU, 2GB DDR3 RAM, and connectivity with SATA 2.0, eMMC, USB, Bluetooth, Gigabit Ethernet, and a camera interface. It’s an ideal single-board computer for gaming since it supports 1080p video output. The board is compatible with ana array of operating systems, including Linux, Ubuntu, Lubuntu, Debian, and Raspbian.

The value of the Banana Pi M3 is the fact that it can run most of the scripts and applications that were designed for the Raspberry Pi, such as WiringPi. The board is pretty easy to use and requires only an OS in eMMC storage to boot. eMMC storage is included with the board, so you won’t need to buy a separate eMMC chip.

The Banana Pi M3 isn’t that expensive, but it isn’t exactly cheap, either. It also runs into the usual problem of overheating, making it necessary to install a heat sink. The OS images burned into the eMMC storage can be a bit unstable, which means that booting up the board can be hit or miss sometimes. 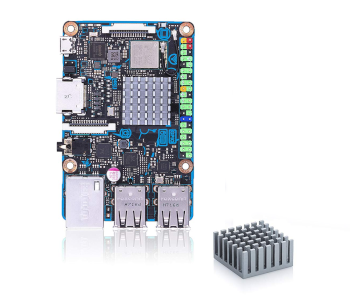 One look at the hardware specs of the ASUS Tinker Board, and one can quickly see how powerful the board is. It comes with a Rockchip RK3328 Cortex-A17 quad-core processor, an ARM Mali-T764 GPU, and a 2GB DDR3 RAM. For interfacing, the board offers a 16GB eMMC, HDMI, a LAN port, USB 2.0 ports, WiFi, and Bluetooth. The board is compatible with a huge number of components and accessories care of its 40-pin GPIO header.

The operating system support of the ASUS Tinker Board is quite extensive and is wider than most other single-board computers. It offers support for Linux, Ubuntu, Chrome, RetroPie, and Android.

The ASUS Tinker Board is one of the few single-board computers that mimic the performance of a desktop computer. It’s fast, supports HD audio playback, and can even output HD and UHD video. It’s a great board for gaming and for various other projects.

Our biggest disappointment with the ASUS Tinker Board is the lack of support for the board, which squanders the potential of its hardware. It has no official community, modules, or detailed documentation. Although it supports an Android environment, it is not registered in the Play Store, making it difficult to run applications on the SDK. With the lack of support or documentation, using the ASUS Tinker Board for creating advanced control processes is impractically complicated.

Because of the ASUS branding, the ASUS Tinker Board is also one of the more expensive Raspberry Pi alternatives. The powerful hardware is certainly worth the price, but it’s a shame that the potential of the hardware can hardly be maximized. 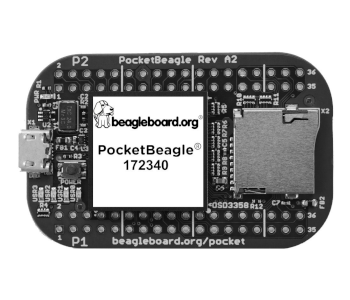 Because of its cost and simplicity, the PocketBeagle is an excellent development board for beginners. The hardware of the PocketBeagle isn’t going to turn many heads. It has an Octavo Systems 1GHz ARM Cortex-A8 processor, a 512MB DDR3 RAM. It also has a microSD card slot, a micro-USB port, 44 digital I/Os, and eight analog inputs.

The PocketBeagle was designed to be a USB key-fob that can be plugged into a computer and programmed using a Linux command-line. This is a very user-friendly development environment that allows beginner and intermediate users to use the PocketBeagle for several different projects.

Although the PocketBeagle seems like a cheap Raspberry Pi alternative, it actually costs a bit high considering the strength of its hardware. The Raspberry Pi Zero, which has similar specs, costs slightly lower. For the same price as a PocketBeagle, you can get a Raspberry Pi 3, a full-sized single-board computer with superior hardware.

Raspberry Pi single-board computers have opened the door for amateurs to get into coding, robotics, and electronics. They have also allowed the miniaturization of processes and projects that required full-sized computers in the past.