by Joseph Flynt
Posted on March 6, 2019
11 Shares
3D Insider is ad supported and earns money from clicks, commissions from sales, and other ways.
DJI has just released the Mavic Air 2. See all of the specs here.

Remote control models have fascinated kids for eons, and RC battleships are no exception. Racing, flying, and sailing provide users with lots of fun, but there’s nothing quite as thrilling as a good battle. Below we highlight the best RC battleships you can get in 2019.

Companies target model battleships and warships at younger audiences, but they’re not only for kids. Naval ships make fantastic big boys toys as well. High-quality replicas can also be educational. The build-your-own kits can help youngsters to develop motor skills and parent-child bonding. So yes, these are toys, but they’re more than just playthings to entertain users.

What to Look for in an RC Battleship

The type of RC warship you opt for depends on your age, skill level, expectations, and budget. The six primary considerations below should help you to decide. Feel free to add any of your own.

Let’s look at each of these in turn and the reasons why they’re relevant.

You might want to keep the cost down if it’s your first RC ship. Try to avoid too ‘cheap’ because it’s going to be a tacky toy that’s sure to disappoint. Look for ‘affordable’ instead. An affordable RC battleship is one that can still offer great value without breaking the bank. The ‘affordable’ category may also include remote control models on special promotions.

You need your new craft to perform well, but the aesthetic appearance also matters. You want a model that’s pleasing to the eyes and not something that looks like a bar of boring soap. The look and attention to detail will be even more relevant if you want an accurate replica on display. Appearance can take second place to performance if you only want to battle on the waves.

3. Not all Hulls Are Equal

Not all ship’s hulls are the same so choose with care. The hull affects speed, influences maneuverability, and increases stability on the water. Read the hull specs carefully. It’s the purpose of these mini-reviews to help you make better buying decisions.

The firepower of an RC battleship is half the attraction. The less expensive toys have cannons on deck for show purposes only. The ones on costlier models fire and have realistic sound effects. Choose a gun that propels cannonballs if you want a more vivid experience. The ammunition choices are ball bearings and BB cannons. The latter provides a low-powered, safer option.

The underwater propellers are essential as they propel or drive the battleship. Not all propellers are equal, though. The more powerful the propeller, the faster the ship goes. Effective propellers also help you—the captain—steer the vessel with more accuracy.

The better the ship’s motor, the better its performance on the water. A decent motor will also be more power-efficient and give you extra playtime. Most battleships use rechargeable batteries, and some are built-in (non-removable). Rechargeable batteries are the most cost-effective way to power a ship’s electric motors.

The remote control (RC) is important because you can’t sail your warship without it. Some remote controls are too small for larger hands and others too big for tiny hands. Most products show images and give specs for their remote control units. You want to check the design and the layout of the controls as well as the size. The more comfortable you are with the RC, the better your control.

These reviews are short and to the point. I tell you everything you need to know and nothing you don’t. The RC battleship choices in this guide are the result of user feedback, personal preferences, and the opinions of experts. There’s also a simple table at the end of each product review. The tables show the main tech specs along with any pros and cons.

Here’s a quick list of these models in the order they appear in the guide: 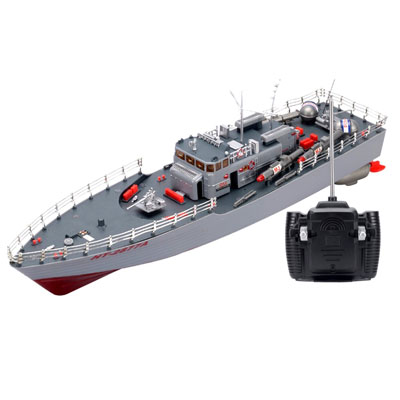 The RC Missile HT-2877 is a ready-to-run (RTR) battleship cruiser. It looks great and is fully-directional. This model is more suited to younger kids and toddlers—under supervision.

The HT-2877 is a capable little missile warship that does exactly what it says on the box. It probably won’t excite preteens, but younger kids are sure to love it. It’s easy to operate, but make sure you read the instructions (printed on the box) the first time around. It’s simple to sail, but there are safety precautions to heed before taking her into the pool, pond, or local lake.

The details are nice too, though older enthusiasts might find the construction a bit on the plasticky side. The warship moves in any direction and it’s quite fast going forward. Turning can be slow so you might want to keep those to a minimum. Another nice touch is the cabin lights.

This Battleship Cruiser is a fun and affordable RC warship that’s ideal for youngsters. It has a ‘wow’ factor up to around age seven. Kids older than that are likely to get bored with it fairly soon. 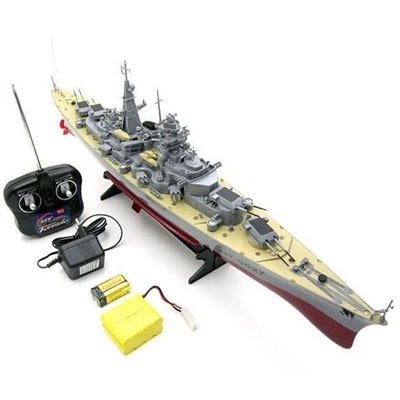 The German Bismarck is an RC battleship with attractive details and glossy exterior. It’s fully maneuverable too. Being a ready-to-run (RTR) model makes it a great choice for impatient captains.

Most who buy the German Bismarck military RC battleship seem surprised at how well she runs. It has the ability to move in all directions and zips quickly across the water. The craft’s dual propellers help with its agility and speed. You only have to decrease the power to one of its propellers to turn the ship.

Another attractive feature with this vessel is its impressive range of around 120 feet. That gives you 60% more range than the previous model. The running time on a fully charged battery is anywhere from 15–30 minutes depending on how hard you push it. That’s potentially double the first choice.

The RC German Bismarck has come down a fair bit from its launch price from what I can see. It costs around ten bucks more than the RTR Battleship Cruiser though they share some similarities. One of those is the plasticky build. Overly boisterous youngsters can easily break this toy, so a little supervision is always a good idea.

It’s called the German Bismarck, but to be honest, it’s not an accurate replica. For most folks, this is not a big deal. Those who want a ship for educational purposes may want to choose something else. 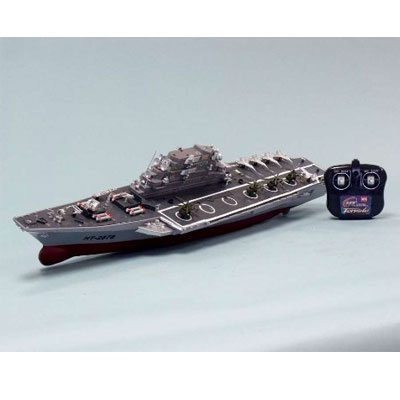 The Challenger is a 30″ RC aircraft carrier model. It looks fantastic and has a highly detailed exterior, which makes it a showcase quality RC Battleship. It also comes with a purpose display stand.

The ship is more than just a display model and performs well on the water. It’s fair to say that this is more of a collector’s warship than a fun toy, but it can be that too. The built-in safety sensor means its props don’t work outside the water. It’s easy to handle once afloat and has a good 60 feet range from the transmitter. The maximum 10mph speed in ideal conditions suggests it’s nifty too.

The 30″ Challenger aircraft carrier is fragile despite its good looks and attention to detail. It’s why I suggest it more as a kid’s collector model than a kid’s toy. Reviewers who complain about its build tend to be those who bought if for youngsters to play with on the water. There are sturdier RC warships out there that can take harder knocks than this 30-inch Challenger can. 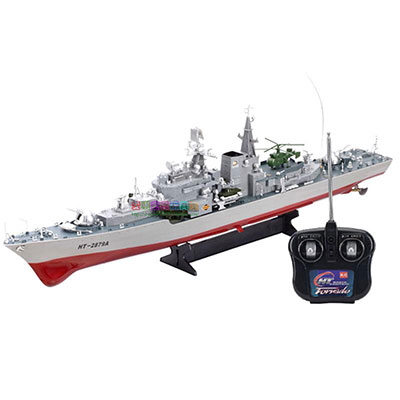 Next up is the Smasher Destroyer. It’s a 31-inch RC HT-2879 Warship. It costs around the same price as the previous two picks. It’s a bestselling product too.

The first thing that caught my eye was the incredible 100 feet range of the Smasher Destroyer. Not everyone wants range, but it adds a bit of extra fun when playing on big ponds and lakes. There are some nice touches to this warship as well. You have the radar tower lights, a model helicopter on deck, and a detailed, glossy exterior. The opposing gun turrets also add to the ships might.

This war vessel is also fully maneuverable and easy to operate—just like the previous two picks.

The Smasher Destroyer shares the same plasticky build as the other models. That means some parts can easily break if you’re not careful. Another gripe with this toy battleship is that it lacks any proper sealing. You can seal the boat yourself, or be careful not to take on water, but that’s not ideal. 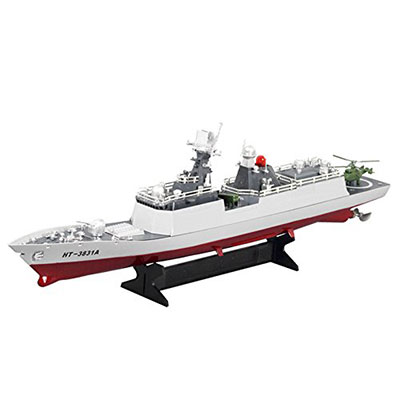 This RC missile warship takes these models up to a new level and price range.

The RC missile HT-3831A battleship Cruiser has a higher-quality build than the previous models. It’s not as fragile either, and there’s higher attention to detail. It also seems to be a more accurate replica than some RC warships. It has an attractive exterior finish, a model helicopter, and dual propellers. It’s quite robust too. That means users don’t have to worry as much about minor bumps.

OK, so the build and details are better than the cheaper warships, but everything else is quite average. That includes the range, speed, handling, running time, and battery life. The sealing is not perfect either. That’s a pain because the ship tends to list and take on water. However, the overall quality and attention to detail are going to be the main attractions for some buyers. 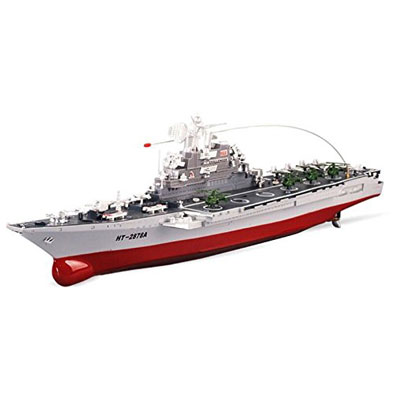 The last pick is the big 4CH German style battleship. It can operate on 27MHz, 35MHz, 40MHz, and 49MHz. There are faster ships on this page, but this one is sturdy and consistent in its performance.

What we have here is a stunning German aircraft carrier with amazing attention to detail. The ship’s 9.6V 800mA battery gives around 25 minutes of fun on a full charge despite the vessel’s 4kg weight. The range is an incredible 262 ft., so make sure you have the power to return if you sail too far out.

The fort rotation is 180-degrees, and the cannon gun flips easily in the up and down directions. Other impressive features on deck are the armed helicopter fleet, fighter jets, light effects, and radars.

The 4CH HT3827a RC German Battleship has a lot going for it though it’s not perfect. Its maximum 4mph top speed makes it one of the slower crafts on this page. The ship also tends to list which is annoying. The listing doesn’t seem to affect its ability to sail, but it would look better straight up.