by Joseph Flynt
Posted on September 9, 2018
15 Shares
3D Insider is ad supported and earns money from clicks and other ways.
DJI has just released the Mavic Air 2. See all of the specs here.

Kids have always loved remote controlled (RC) toys. The RC walking robots used to rule the roost back in the day, but now there’s competition in town. Radio-controlled dinosaurs have captured the imagination like robots never could. Maybe it’s because they’re real, or used to be. What’s so special about these beasts is the variety in colors, sizes, and multiple functions.

The most fascinating features of RC toy dinosaurs are the simulations. Below is a typical list of the multifunctional effects to expect with these engaging models:

A few radio-controlled dinosaurs can do all the above and more besides. Others may only do some. The point is there are many things to keep the little ones entertained for hours. These sophisticated toys are all the rage now as the age of dinosaurs awakens in homes across the country.

About My RC Dinosaur Guide

Not all RC dinosaurs are equal, not in price, build quality or functionality. My simple guide reviews seven of the best prehistoric reptile models around. The ones on this page are the result of expert opinions, real user reviews, and personal thoughts. At the end of each mini-review is a simple table that shows a few tech specs along with any pros and cons.

Below are the prehistoric toy reptiles in the order they appear in this guide. The recommended age is from the toy makers. Younger kids may also enjoy these models under supervision. 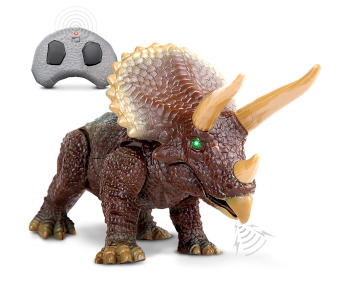 The toy Triceratops is an affordable remote control dinosaur that kids just love. It might be a cheap RC toy, but it’s got plenty of prehistoric bells and whistles to ignite any youngster’s mind.

The best thing about this simple model is to watch a child’s eyes light up as they explore its functions. It’s only 9-inches long, so it’s not big or mean enough to frighten toddlers like some larger models. The remote controller is simple to use even for kids. The model has some lifelike dinosaur movements like the articulated arms and motorized legs. Even the eyes glow.

The built-in speaker lets out a few impressive sounds that add to the experience. There’s also an Auto Performance mode that lets the Triceratops roam around freely.

There’s very little to gripe about for a model remote control dinosaur in this price category. Some may find the restricted forward and back only movements and continuous roar a bit tedious after a while. 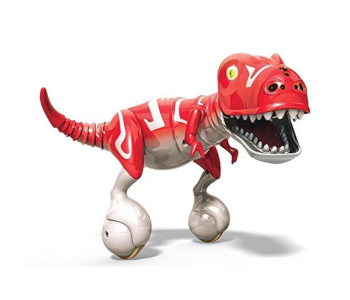 The Zoomer Dino is as life-like as you can get with a toy dinosaur. He’s a bit wild out of the box, and it’s up to the master to tame the ferocious beast. The way to do that is with hand gestures or by using the controller. This model is truly interactive and the reason kids 5-years and above love it so much.

Here are some of the Krimson dinosaur’s unique features:

The model even has mood indicating eyes so you can tell how he’s feeling. The effects include clear bright eyes for happy, red for angry, and blue when he senses your hands. The eyes also change to a purple color when you’re training or taming him. How cool is that?

There’s a lot that could go wrong with Krimson Red Zoomer Dino because of the many functions. That makes him a tad fragile. It’s not the kind of toy you’d want to throw into a box when not in use. The other downside is that it takes a while to work out all those functions. Older kids shouldn’t have a problem, but 5-year old’s may struggle at first. 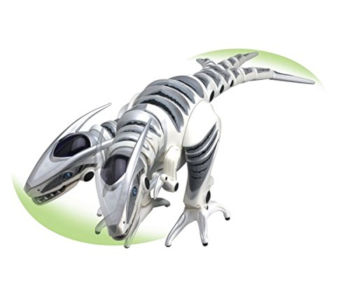 The WowWee Roboraptor X dinosaur is the Top Pick in this guide. It’s a handsome beast with a wild personality driven by artificial intelligence technology.

The first thing that surprises people when they unbox the WowWee Roboraptor X is how big he is. The size is welcome for most buyers though. Just make sure its 2.7 feet length is not too big for your needs or storage. The model’s biomorphic motions are realistic and make a great first impression for kids. You get two control options to play with, i.e., direct control and free-roam (autonomous).

The controller has a straightforward layout and fits snugly in the hands. You can also operate the dinosaur via a Roboremote IR dongle (included) using an Android or iOS smartphone or tablet. The Roboraptor X dinosaur comes with three preset temperaments: playful, cautious, and hunter.

There’s a lot to love about the WowWee Roboraptor X RC dinosaur, but it’s not perfect. The biggest complaint is the short control distance. You must use the controller—RC or smart device—close to the model for it to respond. That can get be frustrating after a while. A more minor complaint is that the model’s too noisy. Kids don’t seem to mind, but moms and dads would sooner it had a volume control. 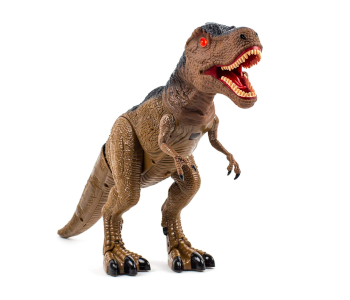 This RC T-Rex is an excellent choice for younger kids. It’s easy to control and provides enough fun and functions to keep the little ones entertained for ages. Even its neck has a skin-like feel to it.

Toysery target this 14” tall remote-control dinosaur at kids 3-years and older. It’s got all the usual characteristics we’ve come to expect from these fun-loving toys. The motion drive is impressive for a toy in its class. It walks, roars, and spins to either side on command. There are some exciting light effects too that illuminate the eyes, mouth, and along the back.

Operating this tiny Tyrannosaurus rex couldn’t be simpler. The remote control has two buttons that control the beast’s head and leg movements. The cool features are forward, dance, attack, and dash. This mini RC Tyranno makes a terrific gift for any youngster with a fascination for ancient reptiles. And the good news for parents is that it’s made using non-toxic, ABS plastics.

Toysery’s RC T-Rex Dinosaur has a lot to offer though it’s a tad underpowered. It has trouble moving on some carpet surfaces. It might not even walk at all if the pile’s too thick. Another complaint is a common gripe from parents, and that is the model makes a racket. It’s a familiar issue with these toy models. It wouldn’t be so bad if there was an option to turn the volume down, but there’s not. 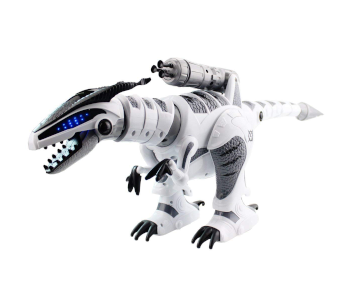 The Fistone Robot-style Dinosaur is another multi-functional touch-sensitive model. This prehistoric beast is for kids 3-years and older and one of the most entertaining in the guide.

This is an all-singing-all-dancing robotic RC dinosaur. It has a touch-sensitive area that wakes the beast up. You know when it comes to life because the head shakes and the S-type tail starts to wag. Multiple touches activate different sounds from the inbuilt dino language. There’s also a demo mode that shows all the moves and actions you can do from the controller.

Here are some of the impressive modes and functions:

Another unique feature is that the robot can remember up to 50 playback actions. The running time is decent too. You should expect between 20–30 minutes on a fully charged battery.

The only real criticism is the long battery charging time of between 3–4 hours. It’s a good idea to invest in a spare battery so the little one can continue the fun. 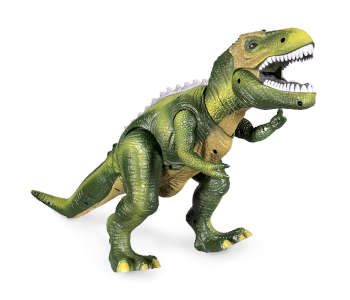 Windy City’s Novelties T-Rex Dinosaur is an RC toy aimed at children 3-years and above. It makes a great first impression with its Jurassic appeal and green scale-like skin.

This little Dinosaur comes to life in several ways. The scaly sweeping tail wakes up the moment you turn it on. The beast can then start to stomp, snap its jaw, shake its head, and bust into a prehistoric roar. Its physical motions are impressive for a toy-grade model and sure to capture the imagination of young minds. And the rock-style I/R remote control is a cinch to use.

Thee LED lighting effects help to keep kids entertained still further. The controller has five simple buttons that are super easy to grasp. The ultra-bright LEDs illuminate the eyes and make the fearsome tongue flash. There are ripples of lava red and icy blue lights displayed along the beast’s spiky spine. The reptile’s light display is especially captivating in the dark.

This remote-control T-Rex dinosaur does exactly what it says in the description. It’s super easy to figure out which is just as well as the instructions are vague. Overall, it’s an excellent toy for toddlers though some may disagree with its price tag. 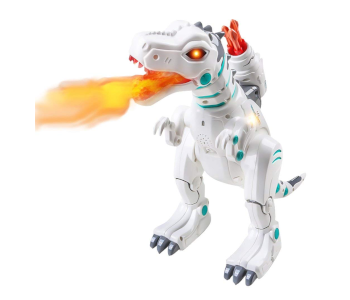 Last in the guide is the robotic Tyrannosaurus Rex Intelligent Dinosaur. This beast is ready for battle with its fire-breathing stunt and ready-to-launch missiles.

It’s fair to say that this is another all-singing-all-dancing RC dinosaur. Some of the features may seem a little out of character for a prehistoric beast. Still, they certainly help to captivate a child’s mind, and that’s the point. Parents needn’t worry about the fire-breathing trick as it’s only mist and water shooting out from the mouth. It’s a neat feature for kids, though.

The control range is an impressive 33 ft., and that’s a lot more than most of the competition. The real excitement is what kids can do with the controller in their hands. This ferocious and friendly T-Rex stomps forward, backward, turns left and turns right on command, but that’s not all. You can get it to sing, dance, tell a story, and even teach a few Chinese characters.

There are three cheery tunes and five songs built into the dinosaur. To activate these are two simple buttons, “Dance” and “Song.” The prehistoric model is not only excellent fun but educational. There’s the language study mode, and a Q&A mode, both designed to exercise a child’s logical thinking. The play time is around 30 minutes on a fully charged battery. Charging takes about 90 minutes.

This model is a little bland compared to some remote-controlled dinosaurs. It’s mostly white and looks a bit too plasticky. That’s coming from an adult perspective of course. I doubt a 3-year old would complain of such things. It seems robust enough though. If you want all the extra functions (see above), this is an excellent value toy. It’s probably a little expensive if you don’t want all the features.