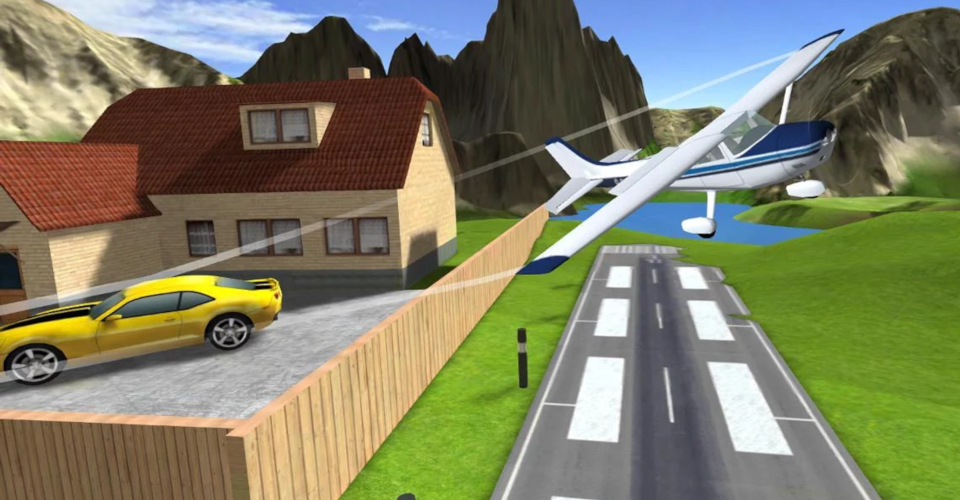 by Joseph Flynt
Posted on May 8, 2019
19 Shares
3D Insider is ad supported and earns money from clicks, commissions from sales, and other ways.
DJI has just released the Mavic Air 2. See all of the specs here.

The RC flight simulator experience is the next best thing to being in the actual pilot’s seat. Sims have always been exhilarating, but nothing compares to the training systems of today. The modern ones offer flight training for a variety of aircraft. They can include planes, helicopters, gliders, drones, and any other bird. Simulators can also have different environments and outstanding graphics to boot.

Anyone can enjoy the experience of a flight simulator, even those who don’t fly RC models. Here’s a quick breakdown of what these realistic pilot practice systems are:

The Real Benefit of an RC Pilot Simulator

Radio-controlled flight simulators are a fun and practical way to train. Newbie pilots experience more crashes than skilled users. Sometimes the damage is only cosmetic. Other times an accident grounds the craft until the user replaces a broken part. Then there are those pilots who write their models off in one hit—ouch! That can be upsetting and costly.

Going to flight school from the comfort of your home reduces the risk of accidents outdoors. That’s the point. A quality program puts you in the virtual pilot’s seat in preparation for those maiden flights.

Restricted Choice Is a Good Thing

There’s little choice out there when it comes to quality RC flight simulators. That’s a good thing. It means you won’t become overwhelmed with options or confused by offers and features. There used to be two worthy contenders, i.e., RealFlight and Phoenix. Unfortunately, Phoenix is no longer available. I’m not sure why because it was also an excellent and popular product among RC’ers.

The good news is that RealFlight is a world leader and their products are better than anything else. These programs don’t become defunct once you learn the flying basics either. You may want to look at helicopters later or learn how to fly gliders, etc. It’s also there when you want to develop new skills like fancy aerobatic and 3D routines. You get the idea.

There are a few other options though most are not in the same league as RealFlight. Some of them are free and certainly worth a look. You can read about them further down the page.

It’s Not a Game

It’s a big mistake when users of RC simulators treat the experience like a game. Yes, it’s fun, but its primary purpose is a pilot’s training tool. Try to keep things real and imagine the aircraft you’re flying is the actual model. You don’t want to become casual or pick up any bad habits that could transfer to your local flying field. Your simulator will become an invalid tool if you treat it as such.

Not all RC models are equal. Aircraft comes in different designs, sizes, aerodynamics, power systems, and abilities. Some models are easy to pilot out of the box, even for kids. But they also have restricted flight envelopes and pretty much fly themselves. Such models soon become boring as well. The real thrill of the flight is to take control and manipulate the bird to do what you want it to do.

The biggest challenge for new RC pilots is to learn hand-to-eye coordination. The brain should know what to do whatever the orientation is of the aircraft. That’s where the RC simulator comes into its own. You’ll appreciate that once you take those newfound skills to the flying field. Also, your aircraft simulator is always there to help maintain those skills or develop new ones.

The first part of this section looks at the flight simulator options from RealFlight. After those there a few alternatives including free options or those with free trials. These overviews will help you become familiar with the standard terms and simulator features.

The true-to-life physics of the RealFlight RF8 bring unbelievable realism to your world. Software like this helps to install confidence in pilots who may not otherwise fly. Skilled users also love it as a tool to continually improve their flying skills. This package is the Horizon Hobby version with an Interlink-X Controller. It has lots of extra features including 12+ new aircraft from the favorite brands.

The interface is clean and intuitive. Trainee pilots can choose from 150 different types of aircraft including drones and helis. The program has more than 40 flying sites to keep flights interesting. Furthermore, users can edit models and journeys to match their needs and expectations.

Cons: A few users have reported issues running the software on Windows 10. Check the company has resolved any issues before you decide to buy if you use Win10.

This is the same program as the one above but without the interlink-X Controller. Not everybody needs or wants the included controller, though. The saving is around 80 dollars at the time of writing.

This handy add-on is for existing Owners of RealFlight 8 earlier version. It’s convenient because it means pilots who want the extra features don’t need to invest in new software. The add-on includes over 12 additional aircraft from HobbyZone, E-flite, ParkZone, Blade helis, Hangar 9, and FMS.

Consider the Kingzer USB 3D RC flight simulator if you only want to experiment. It’s an affordable introduction to sims and connects to a PC via a USB port. It’s restricted, but better than nothing.

Dynam 6CH is a little-known FMS USB RC Flight Simulator and not one I’ve tried. It doesn’t cost much yet seems to boast a few unique features. It comes with assembly sticks that use double bearings. That suggests they stay in place after long-time use. I like that fact that it’s a USB setup too. All you do is plug the controller into the computer’s USB port to play (no batteries needed).

This is the Lutema 2.4GHz Heligram Flight Simulator. It’s for helicopter practice and comes with LED SkyText Technology. It’s a fun product to use and lets pilots display custom messages on the blades which is a bit gimmicky. There’s a virtual flight range of 100 ft. (30 M). The controller allows pilots to maneuver in all directions. Simulations include dual speed, gyro stabilization, and in-flight sounds.

Absolute RC Simulator is free to download, so it has 100s of reviews. Despite that, it only gets an average rating from all the feedback. That’s likely because the graphics are subpar. I still think it’s a brilliant introduction for first-time users, and it’s versatile too. You can use it with RC planes, helis, and boats. It even comes equipped with 4 different camera modes.

Pilots get to choose from several flying fields. Skilled users can exploit various interactive objects to advance their aerial skills further. This app has 4 control modes and 3 skill level settings.

This is the 3D helicopter rescue flight simulator app and another free download. It provides fun and challenging virtual flight practice for helis and RC planes. The app comes with several challenges that include engaging rescue missions. There are also heavy lifts as well as carrying victims to hospitals. Other standout features are the realistic sound effects and detailed chopper rescue environments.

This app based flight simulator is a training app for flying passenger jet airplanes. It has two main practice flight modes. One is the Emergency Plane Landing and the other is Airplane Rescue. It’s more of a game than a realistic RC training simulator, but you can download it for free and take a look.

Last on the list is an airplane flight simulator app with lots of flight training programs. Users can learn how to take off, land, perform emergency water landings, and control the aircraft in a storm. Other flight practices include banner advertising, racing, firefighting, and landing on an aircraft carrier. There are tons of missions and 40 levels to choose from at the time of writing. It’s free to download.

Modern RC planes come with many failsafe and beginner-friendly flying modes. Even so, pilots of all levels do crash on occasion, especially when they take full control of the plane. Flight simulators help you develop real skills without the risk of damage to the actual model. Plus, simulators are fun to use indoors when the weather’s too bad to fly outside.