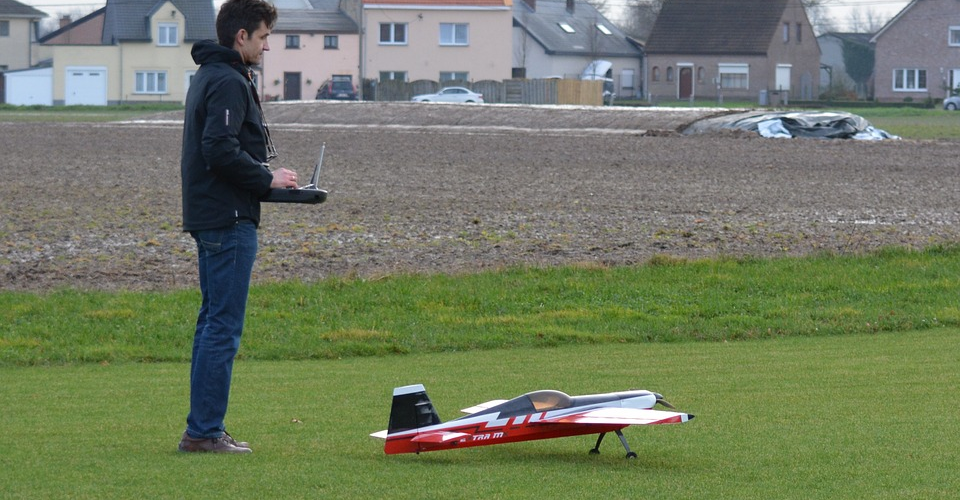 by Joseph Flynt
Posted on July 2, 2019
13 Shares
3D Insider is ad supported and earns money from clicks, commissions from sales, and other ways.
DJI has just released the Mavic Air 2. See all of the specs here.

RC pilots who understand how their planes operate tend to make much better aviators. Knowledge is essential for those into hobby-grade R/C aircraft. There’s no point in upgrading parts and components unless you know what they do. This simple guide looks at RC planes controls, their role during flight, and why you should care. The bite-sized sections make it easy to read and quick to navigate. 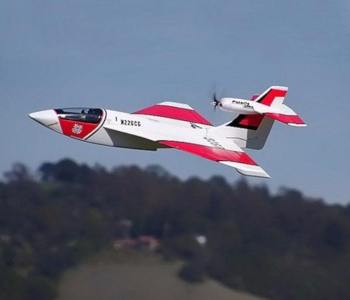 Flight control surfaces are vital parts of any plane as they’re responsible for the way it flies. To pilot an aircraft is to control its motion in three dimensions because it’s airborne. Road vehicles need directional control in only two dimensions, left and right. A model airplane balances on the center of gravity (COG). Therefore, it must rotate around three axes during flight, i.e., pitch, yaw, and roll.

An RC plane’s three flight control surfaces are movable airfoils. They are responsible for controlling the aircraft’s rotation around its principal axes. These are its elevator, rudder, and ailerons.

Let’s now look at the transmitter and its controls before we get to the parts of an RC aircraft.

Your transmitter (TX) is one half of the radio control system, the other being the receiver or RX for short. The TX is an electronic handheld device that you use to fly the aircraft. It has joysticks to control the plane’s flight movements. They include throttle, rudder, elevator, and ailerons—more on those later. The transmitter communicates (talks) with the aircraft via its receiver.

Transmitters also have channels (CH) that sellers highlight on sales pages. Each movement of an RC aircraft needs one channel to function. A four-channel TX controls the following:

Toy-grade transmitters only have three channels as the planes they control don’t have ailerons.

The job of the transmitter is to send signals to the model’s receiver from its controls. Control stick movements tell the plane’s servos exactly how to move its control surfaces. A 4CH transmitter—or higher—is a lot more fun to fly and watch than a 3CH. That’s because the model has Ailerons which enable it to roll. The default functions of transmitter sticks are the same.

The right-side stick of a 4CH transmitter controls the elevator and aileron. The left stick controls the throttle and rudder. More channels mean more controls, but the main stick functions are the same.

Parts of a Transmitter

Below is a list of the typical transmitter parts found on a 6+ channel controller. Basic models won’t have all these parts, and some devices may have one or two unique features. Even so, it’s handy to know what they all are so that you can make better-informed buying decisions.

These parts are located from left to right and top to bottom of a typical transmitter.

The transmitter above has two extra channels (5 & 6) for servo functions. Servos control all the plane’s moving parts. In this case, it’s retractable landing gear (CH5) and flaps (CH6).

So, the joysticks, switches, and knobs of a transmitter control all the moving parts of an RC plane. This section looks at how the aircraft responds to each of these controls, namely:

Pitch is the rotation around an aircraft’s side-to-side axis. A plane’s elevators are control surfaces typically located at the rear of the craft. Their job is to control the wing’s lift and angle of attack. Elevators are usually hinged to the horizontal stabilizer or the tail. The elevator rises upwards as you pull the right joystick back. A forward push forces it to go down.

Roll is the rotation around the aircraft’s front-to-back axis. Ailerons are hinged sections located on the outboard part of a wing. The right-side stick on the transmitter raises the aileron on the plane’s right wing. It Simultaneously causes the aileron on the left wing to lower. This control forces the model plane to roll to its right. The same action on the left stick rolls the aircraft to its left.

Yaw is the rotation around the aircraft’s vertical axis. Pilots use rudder controls along with ailerons to turn the plane. When you push the transmitter’s left stick to the right, the rudder goes in the same direction. Likewise, a push to the left moves the rudder to the left. Again, the stick and plane direction seem reversed when the model flies towards you.

A forward push on the left joystick increases the motor or engine’s speed and subsequent thrust. A backward pull on the stick decreases the motor or engine’s speed and thrust. These movements control the servo connected to a carburetor with engine planes. The same movements control the electronic speed controller or ESC with electric-powered planes.

Flaps are moving sections located on the trailing edge of a model aircraft’s wing. The flap control is typical on transmitters with more than four channels. It’s the sixth channel on our example above. The job of aircraft flaps is to create more lift as the plane flies at slower speeds. They also help to slow the bird down as it comes to land.

The retractable landing gear is another control function found on transmitters with more than 4 channels. It’s channel 5 in our example above, controlled by a switch at the top left side. A simple flip of that switch raises or lowers the landing equipment accordingly. 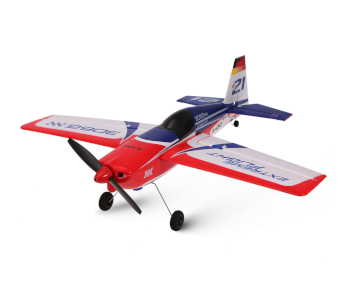 Not all RC planes can accommodate separate control surfaces. Those that can include models with big delta wings and no tailplane. A delta wing is a one piece triangular type structure typically found on military aircraft. You still need control surfaces, so the way around it is to use control surface mixing. This arrangement also requires a computerized transmitter with mixing capability.

Control surface mixing can only work when the control surfaces can function seamlessly together. That means they both move up/down simultaneously and opposite, i.e., one up and one down.

Proportional is a word we often see now on sales pages of radio control systems. It relates to proportional transmitter control. So, if you gently move a joystick, it prompts an equally gentle response with the aircraft. Minimum and maximum movements also respond accordingly. Non-proportional RC plane controls are simple left/right, on/off functions and nothing more.

Most R/C radio systems are proportional now aside from the cheaper toy-grade models. Proportional setups give pilots much better control and help them fly with enhanced accuracy. This type of control needs some practice at the entry-level due to the increased sensitivity.

Some modern transmitters have a built-in LCD screen that provides useful telemetry data. Sensors fixed to the plane lets you view essential information in real time. That includes things like battery voltage and remaining power. It may also display the altitude, and the temperature of the motor or engine, etc. Being able to gauge parameters like this is fun and beneficial to piloting.

Get to know your RC planes controls. An understanding of how stuff works make the hobby so much more enjoyable. You get to swap parts and upgrade components easily. You know what they do and the way the new piece will behave in your model. Scratch building is another area some knowledgeable RC’ers like to explore. And at the beginner level, knowledge helps to avoid newbie buying blunders.