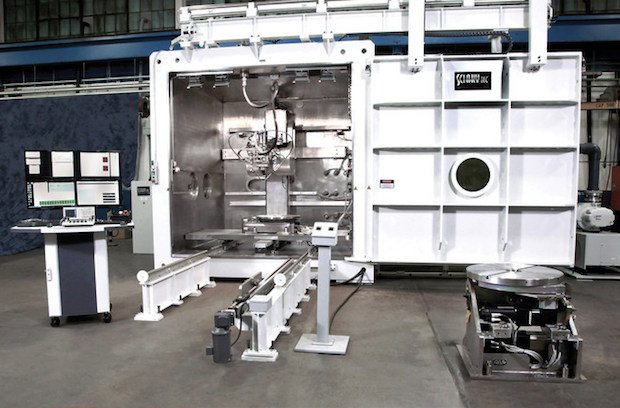 Sciaky Gets Their First Customer from Asia

by Joseph Flynt
Posted on March 16, 2017
19 Shares
3D Insider is ad supported and earns money from clicks, commissions from sales, and other ways.

The sale will be completed some time in January next year. The buyers in Japan have not disclosed their identities for competitive reasons, and further details about the EBAM’s future use will be disclosed this autumn. What we know for now is that the Sciaky EBAM 110 system will offer 3D printing services to their Japanese customer base and assist in internal product development.

Ahead of the Competition

Sciaky’s capabilities in 3D metal printing have long been lauded in the manufacturing field. The EBAM systems boasts one of the biggest work envelopes for metal additive manufacturing in the industry, which allows it to produce parts which can range from 8 inches to 19 feet in length!

The EBAM also provides one of the fastest deposition processes in the market today in terms of metal additive manufacturing, with a 7-20 pounds gross deposition rate.

EBAM’s Interlayer Real-time Imaging and Sensing System (IRISS) is a one of a kind additive tool that can sense and digitally self-adjust metal deposition with great precision. The IRISS helps EBAM deliver large 3D printed batches of metal parts with consistent part geometry and mechanical properties.

The Science Behind EBAM

The EBAM system manipulates a 3D CAD model to generate a numerically controlled tool path. The part model is sliced into layers, after which the deposition process builds the metallic alloy part using a gun-like tool. The gun uses a highly focused stream of electrons to heat up and fuse the material. The process is performed within a vacuum chamber, where the electron beam can be applied efficiently at a high power to achieve some of the highest material deposition rates available on the market. 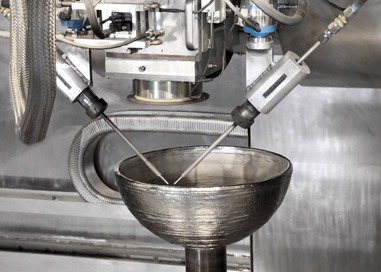 A good example of EBAM’s effectiveness was on display earlier in the year, when Sciaky helped enhance the production of a titanium variable Ballast tank for the International Submarine Engineering (ISE) organization. Thanks to EBAM, the ISE was able to accelerate the speed of production for the tank and cut down on production costs.

Sciaky was offered the project after ISE’s former Russian supplier closed down shop. ISE was on a tight deadline, and after learning about Sciaky’s previous work creating 3D printed titanium propellant tanks for the Lockheed Martin Space System in 2015, they reached out to the company.

Sciaky came up with a fast-track plan for meeting ISE’s production needs. They put EBAM to work printing out the parts of the tank. Use of the printer helped bring down the production time from 16 weeks to 8. Also, the portion of the manufacturing process where the parts need to be retooled with a new forging supplier was rendered unnecessary, which helped reduce overall costs.

The VB tank that was ultimately created using EBAM successfully passed the same qualification testing process as the tanks that were created using the old forging process. The success of the venture helped convince ISE of the merits of 3D metal printing, and they now plan to use EBAM to print other critical titanium parts.

The tank that Sciaky created for ISE will form a part of the organization’s Arctic Explorer Autonomous Underwater Vehicle (AUV). Measuring over 7m long and weighing more than 4409 pounds, the Arctic Explorer is the largest of the Explorer AUV class. It can remain underwater between missions for long periods of time, while a remotely operated vehicle can be used to service and charge the machine after the AUV is attached to a docking head. The VB tank that was printed by Sciaky will be installed on-board the Arctic Explorer. The Explorer is scheduled to be delivered to the University of Tasmania in 2017. It will then be sent to Antarctica after it has undergone the necessary trials and training operations.

As you can see, Sciaky continues to lead the way when it comes to metal 3D printing. We can’t wait to see what innovations they produce next.