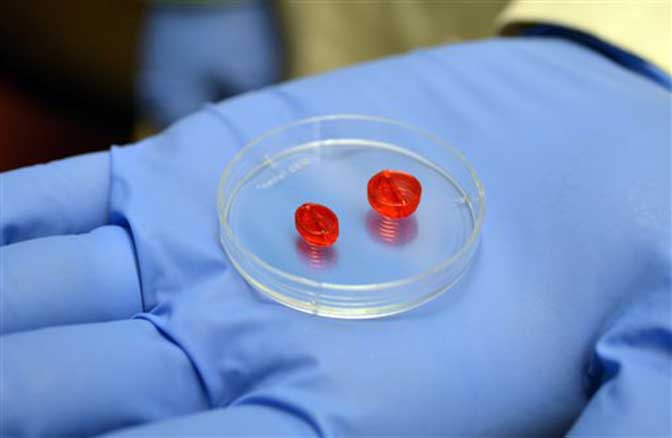 by Ramon
Posted on May 5, 2014
15 Shares
3D Insider is ad supported and earns money from clicks and other ways.

Only recently I wrote about how 3d printing is going to change the medical sector. We’re already familiar with organs such as a liver, ear, skull or even a windpipe being 3d printed. Now, another huge breakthrough is about to take place: the 3d printing of a human heart. Last March, scientist have successfully printed tiny two-ventrical cylinders at the University of Louisville, Kentucky USA. Is this the first step towards an alternative for organ donation?

How Do You 3D Print a Human Heart?

So, if this is the first step, what will the next steps be? According to Stuart Williams, who is the projectleader and a cell biologist working at the University, “the biggest hurdle to overcome, is to have the cells cooperate with eachother as they would do in a normal heart”. At the Cardiovascular Innovation Institute, where the research is being conducted, the little heart-chambers have already been tested on mice and other small animals, said Williams.

Then there’s another obstacle to overcome, which is keeping the cells alive after they’ve been 3d printed. “It’s a huge challenge to provide complex organs like livers and hearts with enough oxygen to survive the printing process”, said Dr. Anthony Atala, whose team at Wake Forest University is using printers to attempt to 3d print a human kidney.

Many more prototypes will be created and tested until a heart can be printed for for patients in need of heart transplant. By making use of the patient’s own cells, scientists are able to recreate the additional cells that make up the entire heart. The end result would be called “the bioficial heart” -combining biological with articifial. Still, this could take years or even decades, says Williams.

“By using the patient’s own cells, the risk of the organ being ejected by the body would be eliminated. This is sometimes the case with currently transplanted organs and implants. This could in turn decrease the need for anti-rejection drugs”, said Williams. “The first patients will most likely be those in need of transplants but who cannot undergo it for various reasons. Children in particular could hugely benefit from this advancement – normally their chests are too small to receive an artificial heart, but with a 3d printed heart this would become an option as well.”

Other approaches are also being taken, such as heart-cells being grown onto a mold. This way, scientists were already able to create beating mouse hearts in a laboratory condition. This technique is not new though, it has also been used for creating bladders and windpipes.

The 3D printer works in much the same way an inkjet printer does, with an extruder that prints material in a predetermined pattern. Which of these methods is best to 3d print a human heart, only time will tell. How do you foresee this technology succeeding, or maybe failing (for now)? Share your comments below!