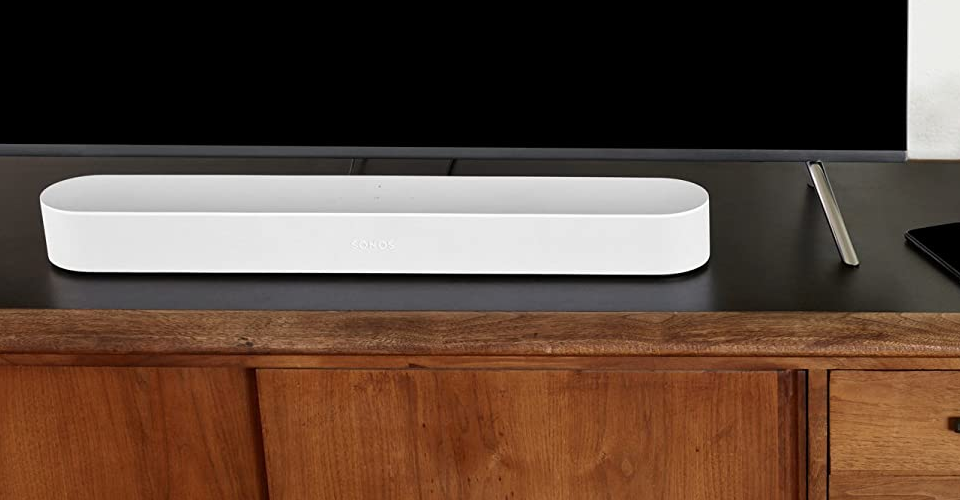 by Joseph Flynt
Posted on November 24, 2020
13 Shares
3D Insider is ad supported and earns money from clicks, commissions from sales, and other ways.

The placement of multiple speakers side-by-side gives a surround sound effect. The wide shape of the soundbar means that it can be easily placed under a television or above a computer monitor. Sometimes, soundbars come with a subwoofer that supplements the speakers inside the soundbar.

The rise of flat-screen displays has led to an increased usage of soundbars. The speakers in the soundbar generally play the same role as the left, right, and center speakers of a stereo/sound system. Besides giving out high-quality sound, soundbars are also expected to have added features like Bluetooth connectivity, WiFi connectivity, good aesthetics, and voice control.

Bose and Sonos are two of the most popular soundbar manufacturers. Their soundbars regularly receive top reviews. In this article, we will compare the soundbar lineups of these two companies. We will see how the soundbars stack up against each other across a variety of metrics.

The Sonos Playbar has 6 midrange drivers and 3 tweeters. The Sonos Beam has 4 elliptical mid-woofers and 1 tweeter. The Bose soundbars and the Sonos soundbars can be connected to an external sound system of their respective brands.

+1 for the Sonos Playbar

Dimensions are important for a soundbar because it influences how they can be placed and used. Soundbars that are taller will mean that your television will be higher up from the table or on the wall since the soundbar will take up space. Similarly, if the soundbar is too wide, then you will have to make sure that it fits wherever you plan to install it.

Bose soundbars are clearly shorter and have a lower profile. So, if you have enough width wherever you plan to install your soundbars, then the Bose soundbars will definitely fit in well and look sleek as well. However, if the width is an issue, then the Sonos soundbars are narrower. The more recent models like the Bose Soundbar 700 and the Sonos Playbar are taller and wider than their older counterparts.

How much a soundbar weighs can affect its portability as well as its installation. Portability is generally not a significant factor for most users as soundbars are generally left in one place after they have been mounted or installed. However, those users who are on the move and are using their soundbars with laptops or desktops in a setting like a college apartment will find the weight to be a relatively important factor.

The soundbar speaker is generally installed on a wall using mounts or left on a table/cabinet below a television. The weight of the soundbar will determine the type of mounts that you may have to use on the wall.

As was the case with dimensions, the older Bose Soundbar 500 and the Sonos Beam models weigh less as they are smaller soundbars.

Connectivity is one of the most important features of any soundbar. These speakers are meant to be used in conjunction with a viewing device or a mobile device (to stream music). Having connectivity with all the devices that are already on a home network is also desirable. Such network connectivity allows you to log onto any device at your home and play audio onto the soundbar. Therefore, soundbars should be able to seamlessly connect with other devices.

Some important connectivity ports/options are HDMI ARC, Bluetooth, and Wi-Fi. USB connectivity is also a plus if you plan to stick-in a thumb drive and play music from there.

Both the Sonos soundbars have Wi-Fi, Optical TOSLINK, and ethernet connectivity. However, they do not offer Bluetooth connectivity. So streaming music from your other devices can only be done through Wi-Fi or ethernet. The Sonos Beam has HDMI ARC connectivity while the Playbar does not. Additionally, Sonos soundbars do not come with their own remote controllers. Instead, your TV remote needs to be configured to control the soundbars. This can be a positive if you do not want to deal with multiple remote controllers or collect them in your TV cabinet. However, those who want a dedicated remote controller for their soundbar will be disappointed.

A lot of the technology products that we use today are meant to blend in with the decor of a living room. It isn’t just about the specifications. Aesthetics are also important. The design, the look, and the color options are aesthetic factors that also need to be considered. After all, you do not want a fabulous living room setup, a nice TV, and a soundbar below the screen which looks like a brick. It will look out of place and ruin the ambiance of your living room.

In terms of aesthetics, the Bose soundbars are slightly better than the Sonos soundbars. The Bose design includes a lower profile soundbar with a grilled front that gives the look of a speaker. The Sonos soundbars have a uniform surface and it looks a bit too monotonous.

Ultimately, it all boils down to how much money you have to part with to buy the best soundbar speaker for your needs. Each soundbar has a different price. For those with an unlimited budget, these price differences probably do not matter. However, for most people who do have a budget, the price differences need to be compared with the differences in specifications. One needs to evaluate whether it is worth paying a premium for the additional features that a more expensive soundbar speaker offers.

So which soundbar should you buy?

The soundbar with the highest score, when compared across various metrics, is the Sonos Beam. But does that mean you should buy it? It isn’t quite that simple. The best soundbar speaker is the one that fits your purpose.

If you want the cheapest soundbar with decent with the most compact dimensions, then the Sonos Beam makes good sense. It also has very good voice control capability. However, if you are prioritizing sound quality above all else, then the Bose Soundbar 700 will be tough to match. It has excellent sound quality, great aesthetics, and Bluetooth connectivity.

If you like streaming audio from multiple devices, but do not want to spend $699 on a soundbar, then the Bose Soundbar 500 is also a good option. If you want top sound quality and do not mind the lack of Bluetooth connectivity, then save some money and opt for the Sonos Playbar. You will also have to think about where you will mount your soundbar and whether your selected option will fit or mount correctly.