by Joseph Flynt
Posted on September 10, 2013
23 Shares
3D Insider is ad supported and earns money from clicks, commissions from sales, and other ways. 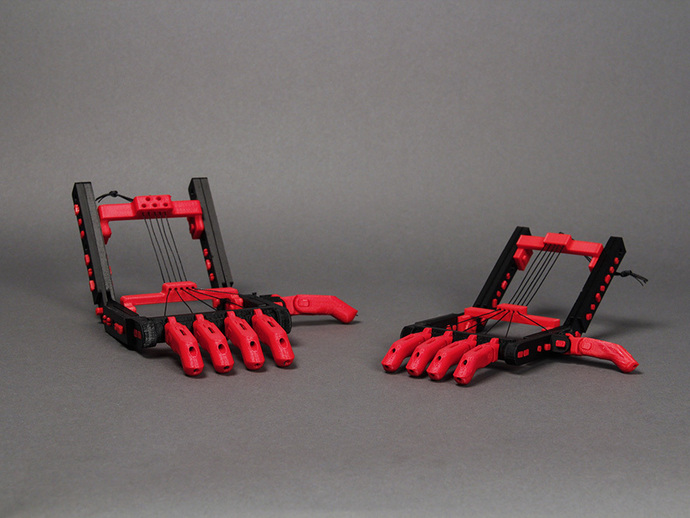 About two years ago South African Carpenter, Richard Van As lost four of his fingers on his right hand to a circular saw. While their were already replacement prosthetics Van As couldn’t afford them, but rather than waiting for prosthetics to get cheaper he could create one himself.

“After my accident, I was in pain, but wouldn’t take painkillers. I barely slept, and the more pain I had the more ideas I got,” he told The Associated Press. “Sometimes you have to chop fingers off to start thinking.”

Van As got the idea of a robothand after he saw a video posted online of a mechanical hand made for a costume in a theatre production. He decided to find the designer, Iven Owen. The two designed metal prosthetic fingers on a milling machine for Van As that would eventually be carried over to the hand they were developing.

The final product from Van As’ and Owen’s work was Robohand, a functioning hand made from 3D printing, some cables and screws. The ability to grasp objects comes the rotation of joints. Printer plans have been made available online and an entire build will set you back around $500.

A major benefit to 3D printing Robohand was the flexibility it gave Vans As and Owen. They could resize the object on a computer and then manufacture it for an individual. The fingers are created in blocks that are then connected to a thermoplastic glove-like covering with cables and screws.

Van As wants to give everybody the chance to have one of his hands and that is why him and Owen collaborated on designing a device that could be used to grab objects, while being freely available to a wide range of age groups. They also made Robohand an open source design that is freely available online.

When the two designers got two 3D printers from MakerBot they managed to reduce production time significantly. “What was taking us two weeks to put together took us 20 hours,” Van As said.

The next step for the team was to help children with Amniotic Band Syndrome, which is a condition where children are born without appendages because circulation to parts of their body is cut off in the womb by amniotic bands.

Van As and Owen’s $500 dollar Robohand is significantly cheaper than the $10,000 to $15,000 hands that are typically used for prosthetics, said Eric Neufeld a U.S.-based certified Prosthetist and Orthotist and the director of Range of Motion Project (ROMP).

The dream for Robohand is to have kits of the hand available in stores around the world, so anybody could walk in, buy one and then build it regardless of having a 3D printer.Van As is already waiting for the design to be patented and has 3D printers all around the world who are volunteering to print Robohands.

Robohand files for download can be found on Thingiverse.