Drones from A Galaxy Far, Far Away: A Review of the Star Wars Drones

by Joseph Flynt
Posted on November 12, 2017
29 Shares
3D Insider is ad supported and earns money from clicks, commissions from sales, and other ways.
DJI has just released the Mavic Air 2. See all of the specs here.

There are few fictional universes more culturally relevant than the Star Wars universe. Ever since the first film in 1977, Star Wars has expanded into toys, clothing, video games, costumes, gadgets, fashion accessories, kitchen tools, office supplies, and other bizarre and unexpected household items. The fictional universe itself has grown and the story has been told through books, comic books, animated series, and subsequent feature films.

Aside from the mythos behind the Jedi and the Sith and their intense lightsaber battles, the film series is also well-known for its stellar dog fights between the most recognizable spaceships ever imagined. Through the collaboration of Disney, LucasFilm, and Propel, you too can experience the feeling of flying these spaceships and battling them. The drones retail at $179 and come in 3 models, each one hand-painted and intricately designed down to the wear and tear suffered from hard-won victories.

In this review, we look into several aspects that you might consider before purchasing your first Star Wars drone. These drones are great for Star Wars fans of every age and make the perfect Christmas gift! 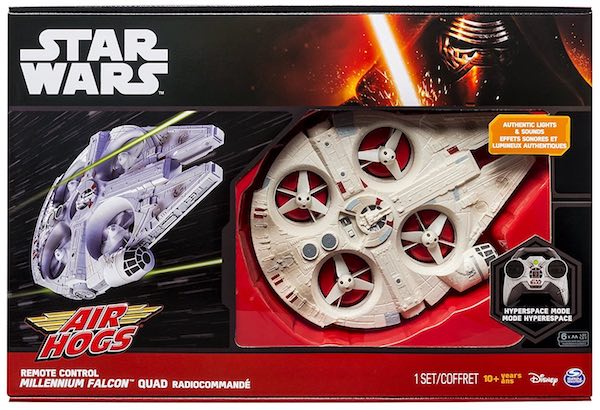 The Air Hogs Millennium Falcon drone is a good choice for those on a budget who still want to indulge their Star Wars fantasies. It’s also for people who want a drone that is easier to control. 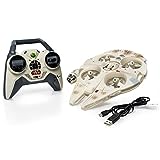 If you’re looking to fly with a certain smuggler and his wookie friend, then you’re in luck. In 2016, SpinMaster released the first Star Wars drone, the Air Hogs Star Wars Remote Control Ultimate Millennium Falcon Drone. The drone has a lightweight foam hull and the main body contains four propellers, successfully mimicking the film design of the ship that made the Kessel Run in less than 12 parsecs. An LED light array in the rear portion reveals the hyper-speed function of the ship which sadly does not work in real life.

The Millennium Falcon drone is bigger than your average drone at 9.5 inches long. However, its foam composition makes it lightweight (2.33 ounces) and very sturdy. The drone is powered by 140 mAh Li-Po battery, which is good for only 5 to 6 minutes of flight. Once the batteries have been consumed, the drone will have to be plugged into a USB port for 20 minutes. There is no way to swap out the batteries in the drone.

The remote control is a fairly standard with Star Wars branding. It’s equipped with two control sticks and a few buttons. Auxiliary buttons located at the left and right shoulders activate the hyperdrive effect and several Star Wars-themed audio clips. The controller is powered by 6 AA batteries, and has a range of about 40 feet.

The Millennium Falcon drone is best flown outdoors or in wide-open spaces to fully enjoy the speeds that it can reach. However, the drone isn’t very well balanced and will tip over easily if you bump into something, run into a strong breeze, or if you negotiate a turn too quickly. The drone does not come with any pre-programmed tricks. However, it must be stressed that navigating the learning curve of flying this drone is quite easy if you don’t get over-ambitious with maneuvers.

The Millennium Falcon drone definitely looks the part and its design will please any Star Wars fan. Its lightweight foam composition gives it the ability to take the hits and survive crashes, which makes it a good drone for beginners. It is not a fancy drone, and does not have sophisticated electronics, or even a camera. The flight experience is not perfect, but it can still be a lot of fun at high speeds. If you’re wondering if this is the drone for you, then the wise words of Han Solo probably best describe what the Millennium Falcon drone is capable of: Fly casual.

The all new Propel Star Wars drone is for people who love the franchise and are willing to pay a bit extra for quality and a lot of extra functionality. Top among the added features are the ability to have laser tag sky battles.

Buyers can choose from the 3 models: The Star Wars T-65 X-Wing Starfighter (for Luke fans), the Star Wars TIE Advanced XI (for Vader fans), and the Star Wars 74-Z Speeder Bike (for fans of nameless henchmen. Ambitious fans can choose all three. The Millennium Falcon model from Propel will reportedly be released at a later date.

Propel’s Star Wars drones are collector-grade and so beautiful that you might not even want to fly them for fear of physical damage. The drones come in packaging that is so well-designed that you may be disappointed that you must damage it to get to the drone.

The Star Wars drones are quite small, not much larger than your hand. To preserve the look of the iconic Star Wars ships, the propellers face down, meaning they are pushed up into the air rather than pulled. The propellers are practically transparent, further maintaining the fantasy of being an Empire or Rebel Alliance fighter. However, you might need to use the Force to look for these transparent propellers should they come off after a crash. Fortunately, the drones come with six replacement parts of each propeller type. Propel also offers free replacement parts for the first year. 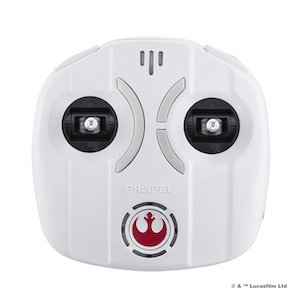 The drones come with a 2.4GHz remote control, which can also be paired with your smart phone via Bluetooth with the free Propel Star Wars Battle Drones app. According to Propel, the drones are capable of flying at a maximum speed of 35 mph. The drones aren’t necessarily easy to fly for beginners. Propel seems to have anticipated this, and included a training module in the smart phone app where you use the remote control to control an on-screen virtual drone.

Outside of simulation, keeping the drones airborne turns out to be an exercise in constant control as they tend to drift and alter their altitude by themselves. Without any GPS or ultrasonic sensor technology, they tend to behave unpredictably so expect to crash often. Fortunately, these drones are more durable than they appear. What’s surprising about these drones is their ability to perform their signature barrel roll maneuvers at the touch of a button.

To accommodate different levels of flying skill, the drones can fly in three flight modes. The flight modes differ in their degree of stick sensitivity, and limits on speed and altitude. Rookies will find that the training mode allows them to get comfortable with the controls with reduced chances of crashing. An exciting level of speed and maneuverability can be accessed at the most advanced mode, although experience has shown that the drones’ gyros still can’t handle sudden changes in direction at high speeds.

Even with all the training modes that Propel can provide, there’s no skirting around the fact that flying these drones is a complicated exercise. For a full experience, it is recommended to fly these drones in a large, open space. A minimum 100-foot radius is recommended by Propel. When flying indoors or in small rooms, a safety cage included in the package can be used. The safety cage provides a virtual training box which the drone cannot move out of.

The batteries that come with the drone can last for about 6 to 8 minutes of flight. Two batteries are provided with each drone, and charging fully takes 45 minutes. Instead of generic battery packs, the batteries of the Star Wars drones are incorporated into the design of the specific drone. Thus, you cannot swap batteries between the different models.

The fact that these drones can hardly hold a stable hover doesn’t matter when you consider their real purpose – the drones were made to engage in battles using a laser tag-like system. The drones are equipped with mild class-1 lasers and sensors that can detect hits. A maximum of 12 players can participate in a dog fight.

To eliminate radio interference during a dog fight with so many players, Propel makes use of their Intelligent Awareness Technology, which they promise will deliver latency-free communication between the drones. This technology combines Wi-Fi, Bluetooth, and a light-based communication technology that has not been used before in a consumer product, called Li-Fi or Light Fidelity.

Through the smart phone app (the phone itself can be handily attached to the remote control) players can keep track of their performance during the round and see who the best pilots are. Getting hit results in your remote control slightly vibrating, and your drone suffering a wobble and a slight loss of control. Players can only get hit three times in a round before they are eliminated, and the controller will smartly exploit this by suggesting that you hit the enemy drone with the fewest lives left.

The short battery life might seem like a concern, but dog fights rarely last eight minutes of flight time. Much like laser tag tournaments, a few minutes in a dog fight can feel like an eternity with an adrenaline-inducing mixture of stress and excitement.

Propel envisions that this experience will expand to a global community, with multiplayer battle venues and pro-level tournaments. After recreation and photography, Propel sees gaming as the new frontier for drones. It is a lofty goal, but perhaps flying with the Star Wars brand can help turn it into a reality.

Propel made sure to cater to the fans at every step of the flying experience of these Star Wars drones. The special edition packaging plays Star Wars-themed music and audio clips relevant to the drone the moment you lift the lid. The drones themselves sit on top of an angled platform that lights up upon unboxing. Even the screwdriver included with the package used to open the battery case and swap components comes in the shape of a lightsaber.

The remote controls themselves are works of art, designed with the colors and the insignias of the Rebel Alliance or the Empire, depending on the drone. While flying these drones, audio can be provided via the small speaker on the remote control or through headphones. The audio provided by the remote control features Star Wars music, sound effects, and voices. This immersive experience goes further into making you feel that you are playing a video game.

Propel’s new Star Wars line of drones marry the classic quadcoper design and the iconic design of the Star Wars spacecrafts to create products that are certainly the fulfillment of most Star Wars fans’ dreams. Flying the drones can be quite tricky, so don’t expect to use your drone in high-speed dog fights right out of the box.

It is best for you to find a community of like-minded hobbyists if you want to maximize the experience of owning a Star Wars drone by holding multiplayer dog fights. These battles are massively fun, with the experience getting even better as you become more proficient in flying.

Let’s face it: These drones were made for the fans. If you are a drone hobbyist who also happens be a Star Wars fan, and you’re wondering if you should buy one (or more) of these drones, then perhaps it would be wise to heed Darth Vader’s words: Search your feelings, you know it to be true.