by Joseph Flynt
Posted on August 19, 2014
8 Shares
3D Insider is ad supported and earns money from clicks, commissions from sales, and other ways.

Slicing programs turn digital 3D models into G-code that the 3D printer can understand. Essentially they cut the model into horizontal slices (layers), generate toolpaths to fill the layers and then calculate the amount of material needed. 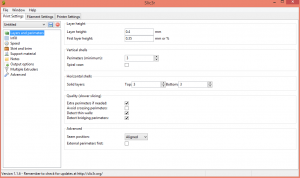 All up, Scli3r is one of the more complete slicing packages available. It has a great selection of options available to users, which can improve print speed, print quality and usability. However, the extensive range of options can be a bit daunting to newcomers and sometimes you’ll run into objects that won’t slice on Slic3r but will on other slicing programs.

Much like Slic3r, Skeinforge is widely used in the 3D printing community and is compatible with most host software packages. Skeinforge was released earlier than both Slic3r and CuraEngine.

From personal experience and from reading other people’s experiences it seems as though Skeinforge is slightly harder to use than Slic3r. Many also find that Skeinforge can sometimes produce better perimeters and rounded surfaces, although later versions of Slic3r are much better at producing perimeters than earlier versions.

CuraEngine is really the wild card of the three and is part Cura. It may not have the best features or options currently, but CuraEngine shows some real potential and could potentially become one of, if not the most popular slicing program available in the future. Ultimaker’s goal when they were developing Cura, along with CuraEngine was to make 3D printing as streamlined and as easy as possible. CuraEngine is well suited to Bowden-extruder machines like the Ultimaker; however it is still compatible with the majority of RepRap style machines.

CuraEngine’s benefits lie in its ability to slice 3D models at light speed compared to Slic3r and Skienforge. It also appears to be able to slice a wider range of models than Slic3r, which often has problems with missing faces or intersecting meshes. Additionally, CuraEngine appears to print objects like gears better than both Slic3r and Skeinforge.

The downside of using CuraEngine is its lack of options and infill settings. Both Slic3r and Skeinforge have a few more infill pattern options, although most of them are far too complicated to be of any use.