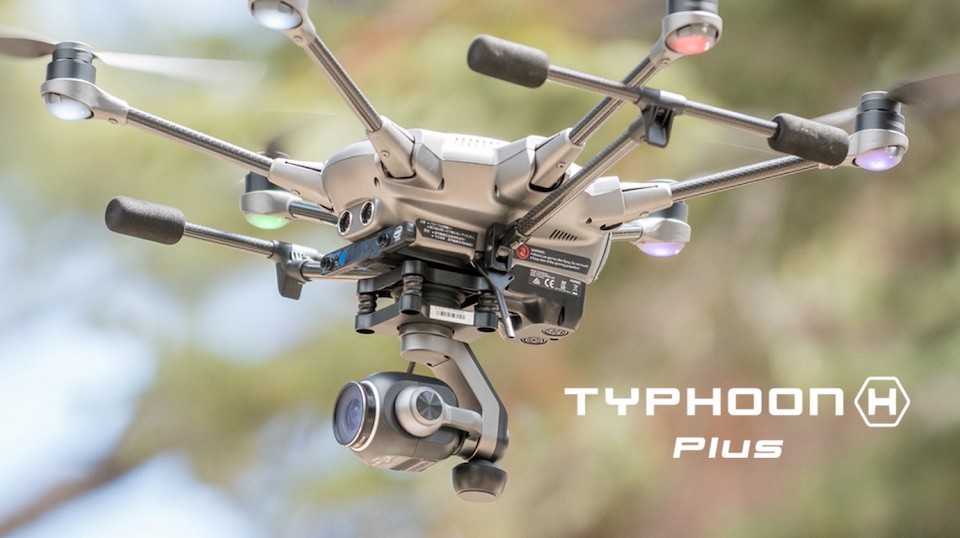 by Joseph Flynt
Posted on December 29, 2018
15 Shares
3D Insider is ad supported and earns money from clicks, commissions from sales, and other ways.
DJI has just released the Mavic Air 2. See all of the specs here.

The Typhoon drone line has been Yuneec’s signature line of professional-grade drones. They all have a unique form factor that helps them stand out from the super popular DJI drones and all other enterprise-level models. In July 2018, Yuneec launched the Typhoon H Plus, the much-anticipated upgrade to the acclaimed Typhoon H. When it was announced a few months prior, the Typhoon H Plus was dubbed as Yuneec’s “most powerful consumer product”.  Was the Typhoon H Plus worthy of all the hype?

In this article, we take a detailed look at some of the most important features that came with the new Typhoon H Plus. More importantly, we compare the Typhoon H Plus with its predecessor and identify the upgrades that Yuneec has made. In the end we ask – is the upgrade worth it?

Portability and ease of setup

As with its predecessor, the rotor arms of the Typhoon H Plus also fold inwards, making it more portable. It’s still larger than a DJI Phantom drone even when its folded down, but it should easily fit in the back of your car in its compact mode. The Typhoon H Plus is in no way a portable drone – it is an extremely powerful and robust piece of equipment that happens to have a large footprint.

Yuneec has made great strides in making the Typhoon H Plus a more powerful machine. With its larger frame, the Typhoon H Plus can withstand winds of up to 35 mph. This is a huge upgrade to the 20-mph wind speed value cited for the original Typhoon H.

Arguably the biggest upgrade made to the Typhoon H Plus is in its camera. The Typhoon H Plus comes with the C23 integrated camera with a 1-inch CMOS sensor that can capture 20MP stills and 4K video at 60 fps. Better yet, the camera comes combined with a 3-axis gimbal that provides stable footage and a 360-degree scope of rotation.

The camera of the Typhoon H Plus is a huge upgrade considering that its predecessor was only capable of capturing 12.4 MP stills and 4K video at 30 fps. It also performs better in low light, but also comes with a 40.5 mm standard ND filter for shooting under harsh light conditions. With the camera specs of the Typhoon H Plus, it has become a worthy counterpart of the extremely popular DJI Phantom 4 Pro.

The improved efficiency and lighter design of the Typhoon H Plus has allowed it to achieve up to 28 minutes of flight time on a single battery cycle under ideal flight conditions. This may sound like a marginal improvement to the 25 minutes of the Typhoon H, but drone photographers and other commercial drone pilots probably recognize the value of even a mere 2 or 3 minutes of additional flight time. Less time spent replacing batteries translates to more time spent with your drone airborne and capturing crucial images and data.

By default, the Typhoon H Plus comes with the Intel RealSense collision avoidance technology. This was an optional add-on for the Typhoon H which was available only in later releases, so its inclusion in the upgraded version is a welcome improvement.

The Intel RealSense technology is a very sophisticated obstacle avoidance system that makes use of the drone’s sonar sensors and camera to continuously scan the environment for potential obstacles. With this technology, the Typhoon H Plus can quickly and effortlessly avoid obstacles, even when they are moving or are barely visible.

The 3-dB improvement may not sound like much, but it is a significant figure considering the exponential nature of the decibel units. In fact, the new Typhoon H Plus has a noise level that is 40 percent lower than its hexacopter predecessors.

As exhibited by the efforts of DJI to reduce the noise of the Mavic drones with the Mavic Pro Platinum, noise reduction seems to be one of the new battlefields in terms of drone technology innovation. We are glad that Yuneec is doing their part to develop quieter and less obnoxious drones.

The Typhoon H Plus comes with an upgraded controller, the ST16S transmitter. On the surface, it looks very similar to the ST16 remote controller of the original Typhoon H with its integrated 7-inch LCD display. However, the screen of the ST16S comes with better contrast and an enhanced user experience delivered by the upgraded Flight Mode 2.0 firmware. The ST16S also comes with a 720p real-time video downlink from the drone’s onboard camera.

All the relevant information that you will need while flying the Typhoon H Plus is helpfully provided by the ST16S LCD screen. Telemetry data, camera settings, white balance, camera tilt angle – all of these are conveniently available via the ST16S transmitter. An HDMI port also allows you to display the live video feed on a computer monitor or a TV.

The original Typhoon H had a good selection of automated flight modes to help in capturing unique drone photos and videos. The modes available in the Typhoon H were Orbit Me, Points of Interest, Journey Mode, Follow Me, Curve Cable Cam, and Return Home.

Disappointingly, the Typhoon H Plus merely carried over these automated flight modes without any meaningful addition or enhancement. Make no mistake – these flight modes are very useful and should suffice for most applications. However, we would have appreciated seeing a higher level of innovation, especially at a time when DJI continues to come up with new and creative flight modes and camera modes.

The Typhoon H Plus comes with built-in smart features for safety and compliance with FAA regulations. With its GPS technology, it can identify No Fly zones near commercial airports. Activating this feature also prevents flight higher than 400 feet, as also mandated by the FAA rules on commercial drone flight.

If you want to impose your own flight restrictions, the Typhoon H Plus offers a Geo Fence feature that prevents it from flying further than 300 feet from the pilot. Its Smart Circle feature defines a circle with a radius of 13 feet from the pilot, inside of which the drone cannot launch or land.

The safety features built into the Typhoon H Plus are a great upgrade that keeps the drone from flying away uncontrollably and prevents physical harm to the pilot. We also really like how the FAA restrictions on drone flight have been integrated into the drone’s smart functions.

Is the Typhoon H Plus Worth It?

Being the newer and more powerful model, the Typhoon H Plus also comes at a much heftier price compared to the original. It costs around twice as much as the base Typhoon H model that does not come with the Intel RealSense obstacle avoidance technology. The most important question is: is it worth it to pay double the price for the new Typhoon H Plus?

If you are a commercial drone pilot who needs professional-grade equipment that is robust, reliable, and stable even in difficult flight conditions, then the Typhoon H Plus is a worthwhile splurge. It combines professional features and aesthetics in a package that is easy enough to learn for casual consumers. The biggest benefits we can see with upgrading to the Typhoon H Plus is the inclusion of the Intel RealSense technology and the massively improved camera.

Having a Yuneec Typhoon H Plus also opens up a world of different drone surveying capabilities via Yuneec’s selection of payload upgrades such as the CGOET thermal imaging camera and the E50 big lens inspection camera. These different imaging options can be used in more specialized drone services like precision agriculture or construction inspection.

Overall, the Yuneec Typhoon H Plus is an excellent drone that happens to come with a steep price tag. It is recommended for experienced drone pilots who want a sophisticated piece of equipment for use in their professional drone services.