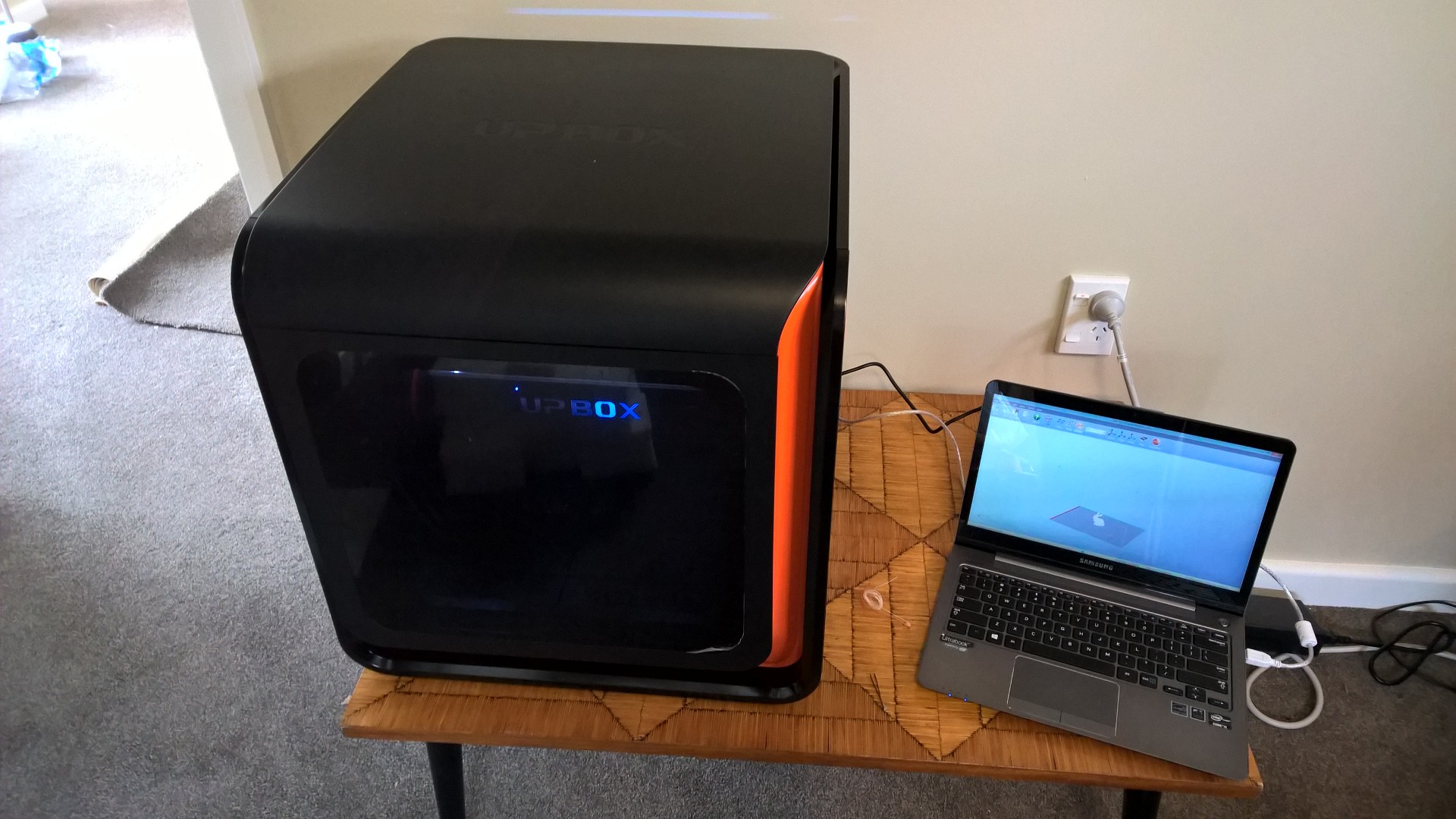 by Joseph Flynt
Posted on March 6, 2016
6 Shares
3D Insider is ad supported and earns money from clicks, commissions from sales, and other ways. 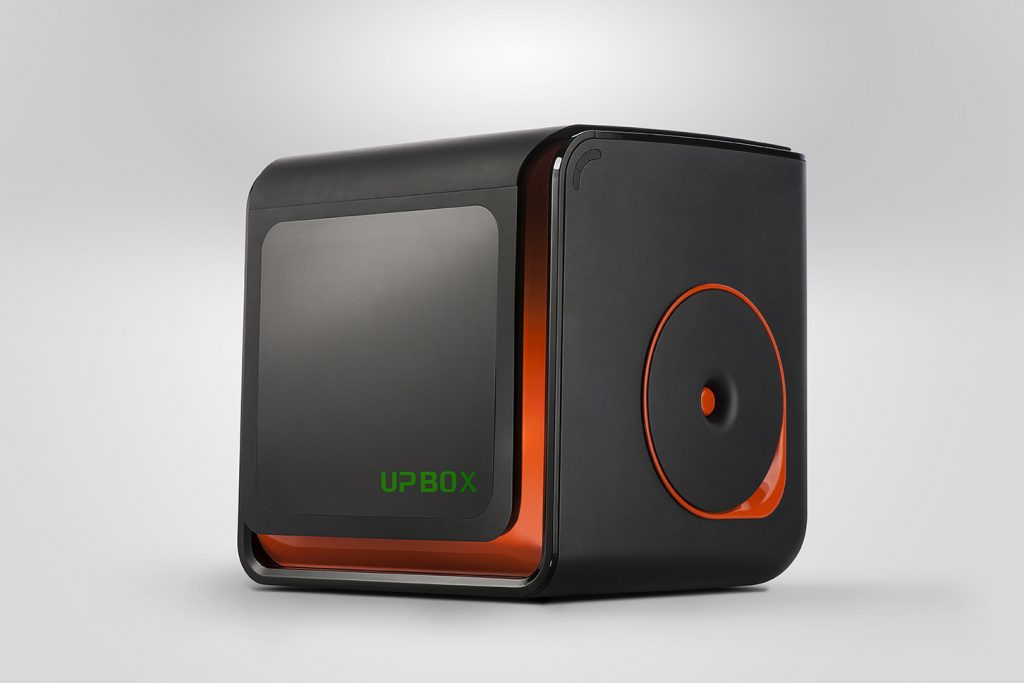 We’ve been living with the Up Box from TierTime for a number of months now and we’ve decided to create a post on our thoughts about the printer. The Up Box is a high end consumer FDM 3D printer designed for users who want a bit more quality and simplicity from their printing experience. It features a large build platform, automatic calibration, full enclosure, HEPA filter and a fairly standard 100 micron layer height.

Keep reading this Up Box review to see what the 3D Printer Plans team think of it: 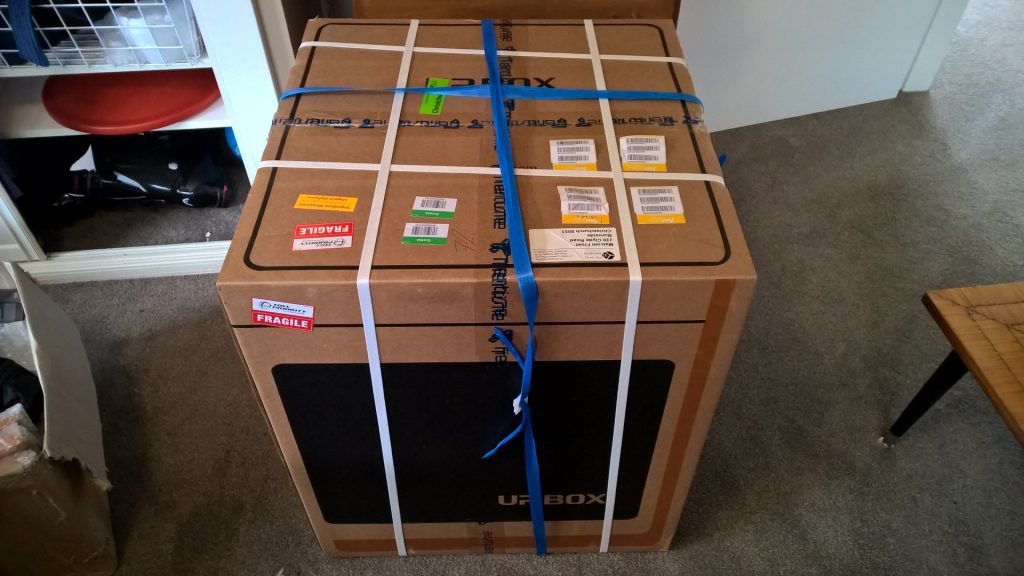 The first thing that you’ll notice about the Up Box is its size. It comes in an enormous well packaged box and is surprisingly heavy when compared to other printers. TierTime have included a number of useful items and tools in the box, which are listed below: 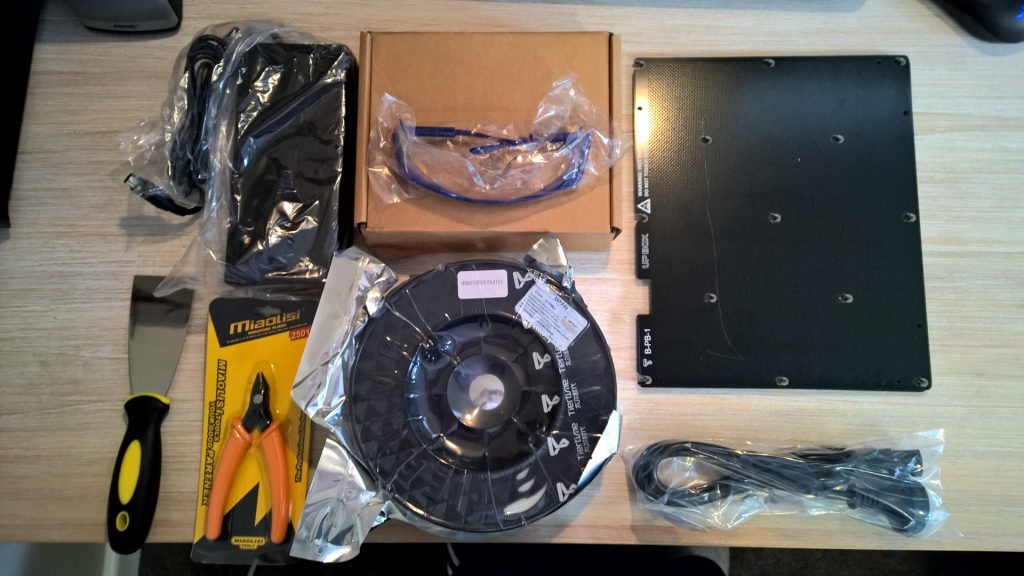 At 19 inches wide and deep by 21 inches high, the Up Box strikes an imposing figure. The orange and black enclosure gives the Up Box a modern, stylish look that certainly sets it apart from many of the other 3D printers out there. It also features two doors; one on the top and another on the front.

Additionally there is a space on the right side that holds a filament spool and the HEPA filter is located internally on the other side. Buttons on the right side of the printer control numerous operations like the lights and pausing/starting the printer. One last design feature is the LED lights under the printbed that show the print status and progress. 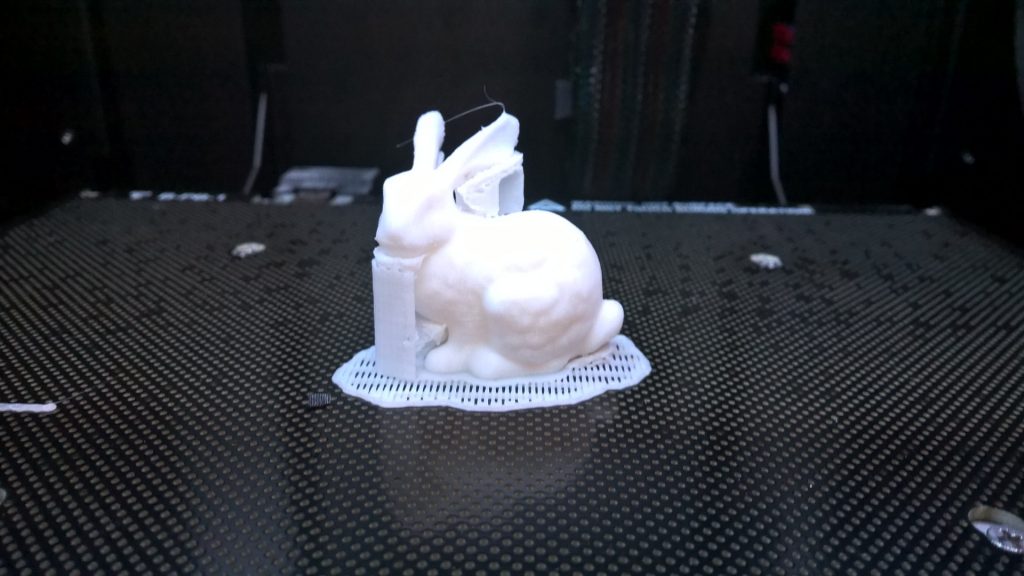 3D printers are finicky things and while many 3D printer companies claim their machines are easy to use, the opposite is often true. TierTime have touted their printer as such a machine and claim it can be ready to print in 15 minutes from opening the box. We were sceptical of this, but to our surprise it really was that easy to setup. We simply fitted one of the four included perfboards to the print bed, installed the filament, sliced the file and clicked print. No settings were changed for the first print and to our amazement it came out surprisingly well. The only issue we really found was that the perfboards are slightly tricky to install, especially when there is a slight bend in them.

TierTime suggest printing a bunny rabbit as the first test print in their user manual. The first test print was done at 0.2mm and was surprisingly successful. While there were slightly rough edges under the ears (due to the large overhangs) and a bit of burning, the print quality was certainly impressive for a first print. 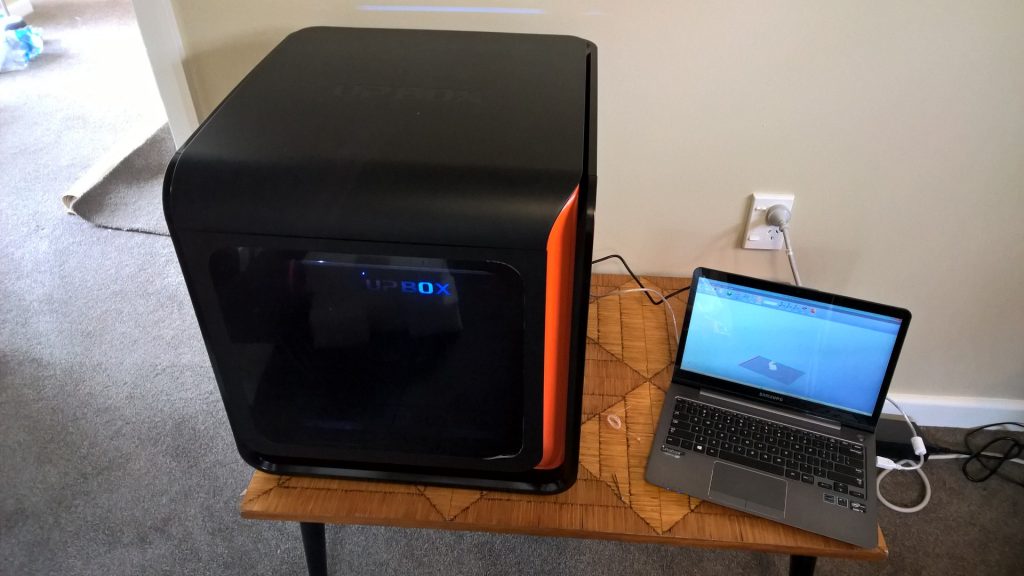 The UP software allows you to choose from a number of different layer heights, print speeds and infills. Compared to other 3D printing software, the UP software seems to be a bit limited. Other slicing software like Cura or Slic3r give the user vastly more control over print parameters, which is beneficial to more experienced users. UP’s software really is limited to a number of pre-set options, which is certainly disappointing. If you’re a first time 3D printer user the UP software is great, but those who have a bit more experience will find the software lacking.

When printing a 20mm test cube, it was found that the printer had a deviation of about 0.1mm – 0.15mm. Lowering the layer height to 0.1mm produced a noticeable increase in print quality; however we feel that 0.15mm is happy median as 0.1mm takes too long to print. 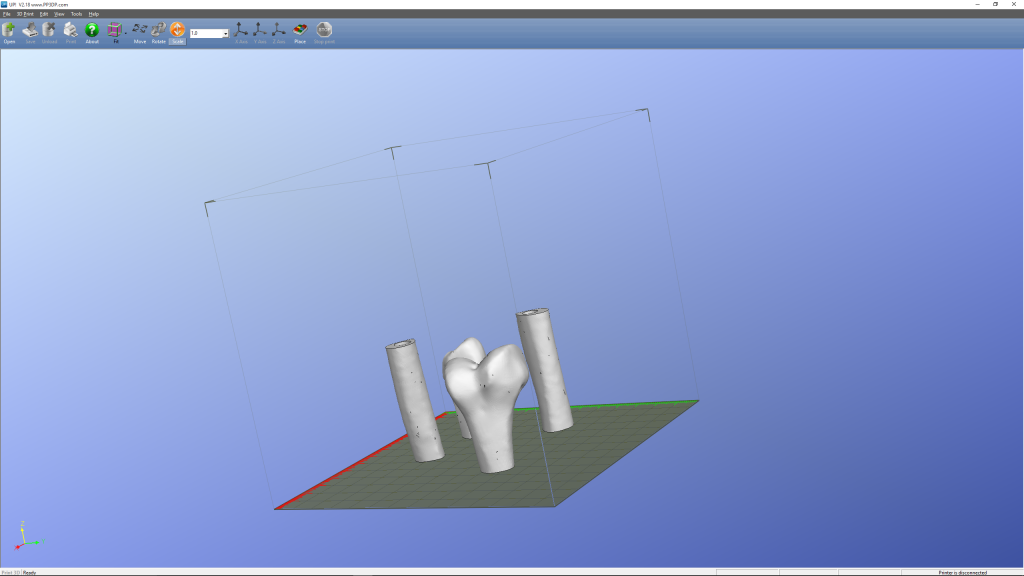 Changing the speed consists of choosing between four pre-set options; normal, fine, fast and turbo. The first three work well and we certainly noticed differences between how quickly they print and the quality of the final print. We found that the turbo option seemed to be a bit lacking as print jobs seemed to fail more often and the quality was pretty terrible; however this option allowed for significantly faster print speeds. It would have been nice if the UP software offered a bit more control over the speed options, like what you get in Cura or Slic3r.

Other parameters that can be changed include the infill density, number of surface layers, print angle, and support options. Once again this feels awfully limited compared to other software we’ve used but it does make for a much simpler printing experience, which is great for new comers or those who want something that will just print. 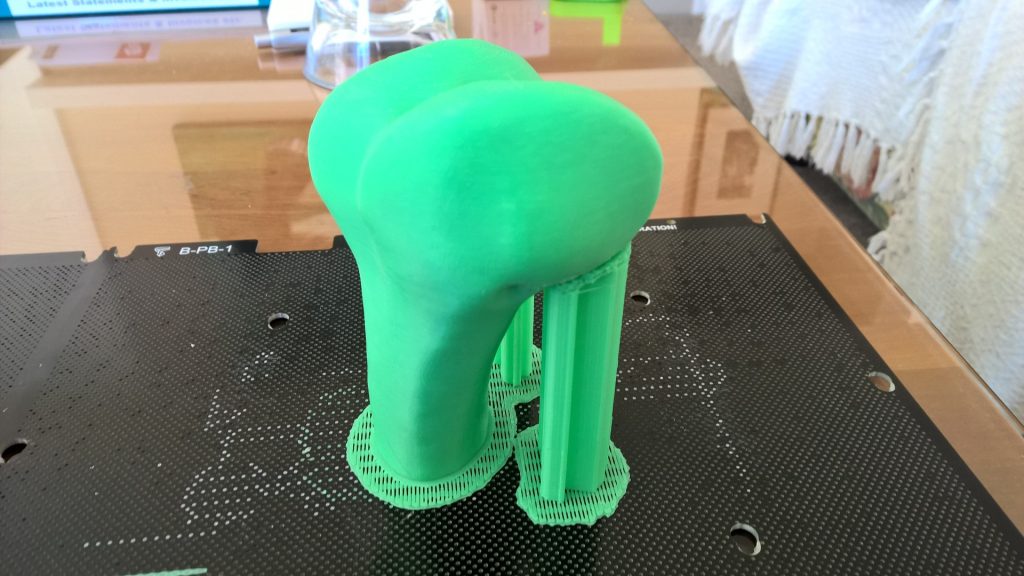 We found the UP Box to be one of the quietest 3D printers we’ve ever used, although it can still be heard in a room next door to it and it certainly wouldn’t be something you want in a bedroom when people are sleeping. The HEPA filter didn’t do much as far as we were concerned and there was still a strong smell 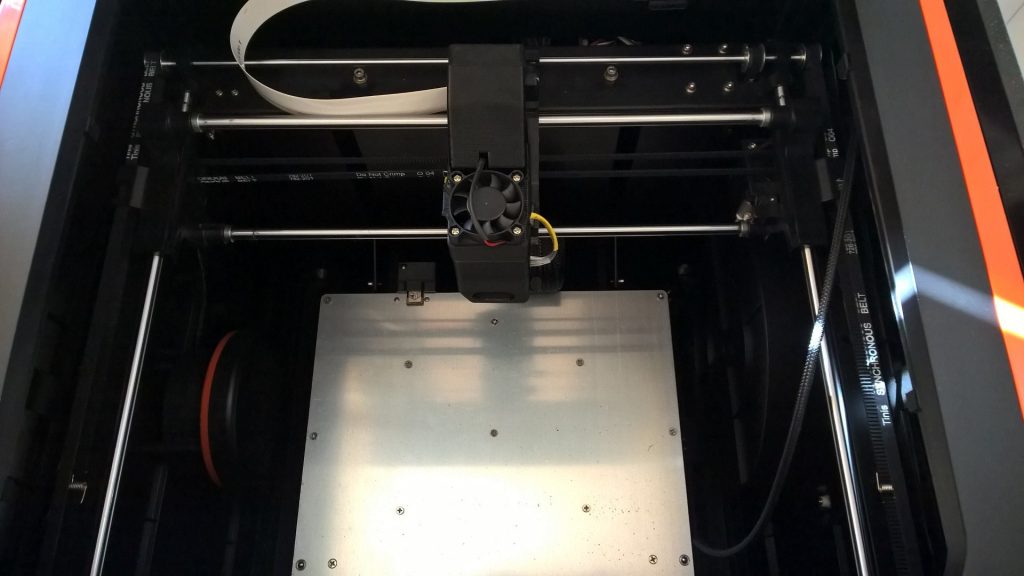 Reliability has been an issue that has plagued almost all consumer level 3D printers we’ve used and we’re afraid to say reliability is still and issue with the UP Box. For the first couple of months the UP Box ran almost flawlessly, but since then we’ve been having terrible issues with clogged up nozzles, air printing and the auto levelling features, along with the nozzle height detection seem to have failed. We’ve changed hot ends a number of times to see if it would fix the issue, which it has slightly, but we’re still getting occasionally getting clogs and the dreaded air printing. The automatic calibration features failing is annoying, but manually calibrating the printer often produces better results anyway. 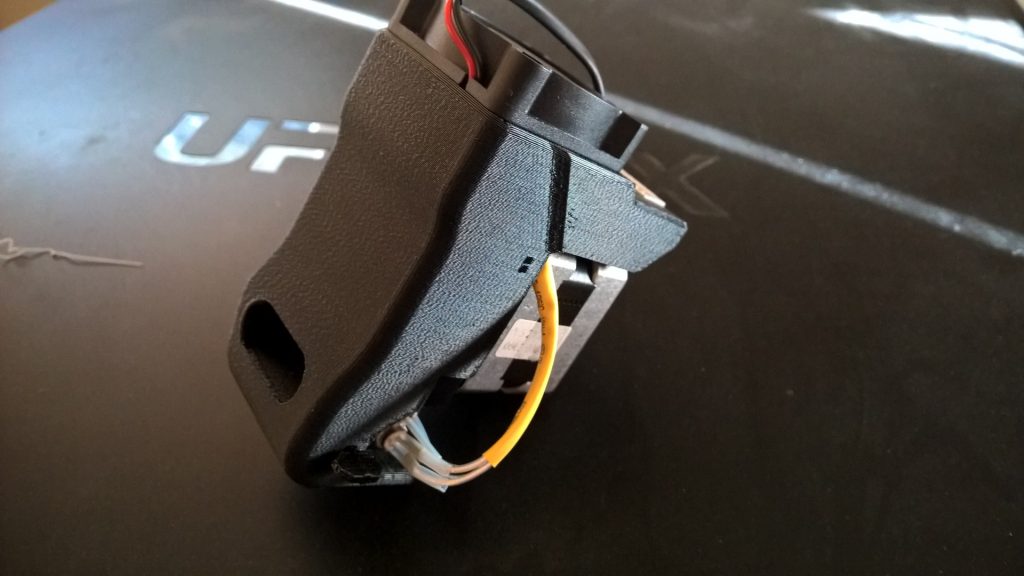 The UP Box from Tiertime is a solid 3D printer that has excellent print quality and a nice large build platform. It is probably the easiest to use 3D printer we’ve ever used and for how little calibration it needs, the print quality and speed is a cut above the rest. For those who want a bit more control over their printer, the UP Box probably won’t cut it and the reliability issues are a bit of a problem; however they are nothing compared to some of our previous machines.

In conclusion we give this printer a thumbs up; however we feel there are other printers on the market that produce similar results for less.

Note: we’ve had a bit of trouble with our UP Box recently and we have had to reach out to their support service for a bit of help. We will update this post with our thoughts on their customer service and support at a later point. Update: UP BOX’s customer support was great.

Joseph Flynt
I love diving into the latest and greatest in emerging technologies and seeing what they can do. I enjoy running when I'm not thinking about tech.
2 comments
Share now:
6 Shares
YOU MAY ALSO LIKE
SEE MORE