by Joseph Flynt
Posted on September 26, 2013
15 Shares
3D Insider is ad supported and earns money from clicks, commissions from sales, and other ways. 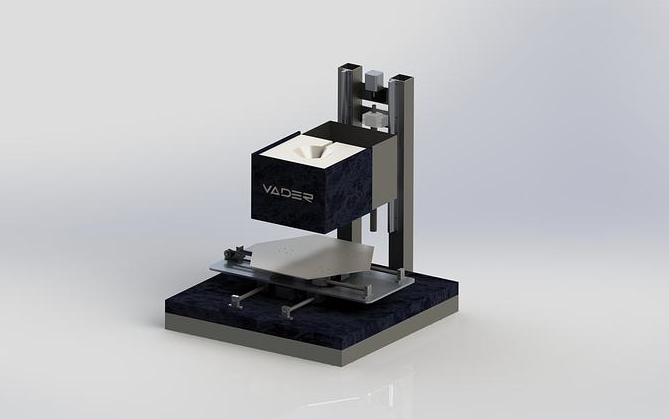 The holy grail for consumer level 3D printers is printing with metal. Current Desktop 3D printers are stuck with using plastics and resins to create objects. Vader Systems is set to change all that with their molten metal Vader 3D printer that functions effectively as a liquid metal inkjet printer.

Vader Systems consists of a father-and-son team looking to take 3D printing to the next level by using molten metals such as aluminium and copper to print with. Scott and Zachary Vader showed off their Vader printer at the New York Maker Faire.

Liquid Metal Jetting (LMJ) is a fabrication process for producing metal components and electronic interconnects. The process of LMJ is similar to ink jet printing where individual molten droplets are accurately printed and layered to form an object. LMJ can produce parts with similar performance parameters as metal components created with machining or casting.

Zachary explained that the family’s technology uses magnetism to propel the molten metal onto the print bed. Some metals don’t have magnetic properties such as aluminium and the printer first has to electrically charge the metal before it can be printed. The team is developing the printer to use aluminium, but new metals will require tweaking to work, but Zachary claims that copper, silver and gold will be fairly easy to add.

Currently most metal 3D printed parts are created with a process called selective laser sintering (SLS). SLS involves the use of a high power laser to fuse small particles of metal into 3D dimensional structures. The laser selectively fuses powdered material by scanning cross-sections generated from a 3D CAD file on the surface of a powdered bed. After each cross-section is scanned, the powder bed is lowered by one layer thickness, a new layer of material is applied on top, and the process is repeated until the part is completed.

Zachary said to Tom’s guide that SLS has its own drawbacks “But the objects aren’t ideal for building machine parts because they are slightly porous.”

The prototype Mark 1 Vader Printer was finished just days before the Maker Faire and didn’t have a printhead. Zachary claims that when the printhead is finished their device can “have thousands of nozzles and run close to or even faster than the speed of an inkjet printer.”

Specs of the Mark 1:

Head over to Tom’s Guide for the full story.

In 2011, Economist Larry Summers proposed a thought experiment to a group of UC Berkeley students involving a machine that he named the “Do-er” The Do-er was capable of creating any good or providing any service. Summers’ had a dark take on how a machine with such capability would shape the future. Summers’ believed that only those able to build or program the Do-ers would be prosperous and all other laborers would be useless in the face of a machine that can do it all. At Vader Systems, we believe that direct to metal printing is the first step to a future of Do-ers–however, the future that we envision is much brighter.

We believe in accessibility, functionality and low cost. Any man should be capable of programming our Do-er. By ensuring low cost and high quality, the jobs of the corporate, industrial and hobbyist will be simplified by an outstanding product that saves time, material and money. Through education, simple programming, and affordable machines, our Direct to Metal printer will be not only a tool of the corporate world, but also of the common man.