What is Thunderbolt 3 Technology?

by Joseph Flynt
Posted on December 17, 2018
11 Shares
3D Insider is ad supported and earns money from clicks and other ways.

There is often a lot of confusion as to what Thunderbolt 3 actually is. This confusion often stems from the fact that many advertising campaigns often refer to Thunderbolt 3 as a cable or connector. However, this isn’t quite accurate. Thunderbolt 3 isn’t a cable at all but rather a superset of capabilities that run on USB-C connectors and cables. Specifically, Thunderbolt 3 is the technology that brings Thunderbolt to USB-C.

Adoption of this technology hasn’t been smooth, however, with many accessories still relying on previous iterations of USB to connect. This slow adoption has led many people to avoid the technology altogether, at least for now, but in this guide, we will explain why Thunderbolt 3 is still a worthy investment for the right user. 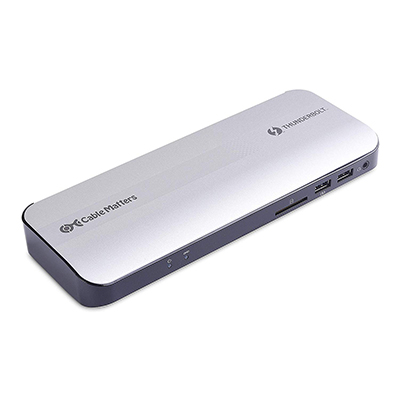 Thunderbolt is the latest technology available for connecting external devices to your PC. It is also becoming the replacement to FireWire as the standard connection for audio recording devices and pro video devices. The technology has been co-designed by Apple and Intel and it has been made to losslessly daisy-chain up to six devices, as well as being able to provide up to 100W of power to those devices.

Thunderbolt 3 is the latest standard and it adds many new major features and capabilities. These include 40Gbps bandwidth and reduced power consumption, whilst being able to move the full 100W of power. A USB-C port with Thunderbolt 3 means a single cable can be all a user needs to power devices and move large amounts of data.

Thunderbolt 3 is also bidirectional with four lanes of PCIe Gen 3 and eight lanes of DisplayPort 1.2. Many companies are taking advantage of this feature as it has allowed for the production and popularization of external GPUs.

What can you do with Thunderbolt 3?

Technology is only scratching the surface when it comes to what USB-C can do and the same can be said for Thunderbolt 3 as well. As it stands there are many different uses for the technology but as it is so versatile this list is only likely to grow.

One of the main and most practical uses of Thunderbolt 3 is with a docking station. Thunderbolt docking stations are a great option thanks to their ability to support up to 40Gbps of bandwidth. This amount of speed means users can connect up to two 4K displays, as well as a number of peripherals without experiencing any latency from any of those devices. This all means that with a Thunderbolt 3 dock, users can truly achieve a one cable setup, where everything is connected to the dock and then to their laptop via one Thunderbolt 3 cable.

Another popular feature of Thunderbolt 3 is its ability to be able to output high-resolution video to multiple displays. It is quite common nowadays for gamers and creatives to use a dual-monitor setup for example, and having Thunderbolt 3 means that these users can enjoy both displays at a resolution of up to 4K. The technology is also future proofed for the higher resolution displays of the future. LG’s UltraFine monitor, for example, is already using Thunderbolt 3 as an input for its 5K display and the technology will be able to support even higher resolutions when they become available.

One of the more niche areas of technology that Thunderbolt 3 affects massively is gaming. We have already spoken about how good the technology is for outputting to displays but there is also another area of gaming that would likely not even exist if it wasn’t for the Thunderbolt technology. This area is on-the-go gaming. For years, companies have been working hard to bring desktop-level gaming performance to a laptop and various different gaming specific laptops have hit the market in that period of time. None of these devices quite cut it though and now thanks to Thunderbolt 3 there is an alternative, external GPUs.

External GPUs are devices that house graphics cards and they are primarily used with laptops to enhance the devices graphics performance. This combination is far more effective than using a gaming laptop as the eGPU can have its own dedicated cooling system and simply connect to the laptop using Thunderbolt 3. This means professionals can still purchase more sophisticated business laptops such as the MacBook Pro or Dell XPS without giving up graphics performance as a result.

Thunderbolt 3 can also be used for high-capacity RAID storage enclosure such as the LaCie RAID range or the PROMISE Pegasus RAID range. Thanks to its superior bandwidth, Thunderbolt 3 is excellent at handling large amounts of data and even the most demanding of users will be able to benefit from the added speed of Thunderbolt 3 with these types of devices.

The technology is also starting to be adopted by smaller solid-state drives such as the Samsung X5. although expensive, this drive has super-fast read/write speeds that absolutely crush most of the other drives on the market. This is partly down to the type of drive it uses but is also thanks to its Thunderbolt 3 port. Without it, the drive simply wouldn’t be able to move data to and from other devices at the speed in which it does.

Should you invest in Thunderbolt 3?

This question should be answered differently by each individual. As good as the technology is, it really depends on each user as to whether or not they actually need it. As it stands, Thunderbolt 3 is still in the adoption phase and it will be some time before it becomes as commonplace as the standard USB port. If, however, you are a gamer looking for portability, a creative professional, or someone who works with large amounts of data or multiple devices on a regular basis, then the investment could be worth it.

Thunderbolt 3 probably isn’t a necessary investment just yet for people who casually use computers for things such as browsing the web, sending emails, writing documents, unless you want the convenience of a one-cable setup.