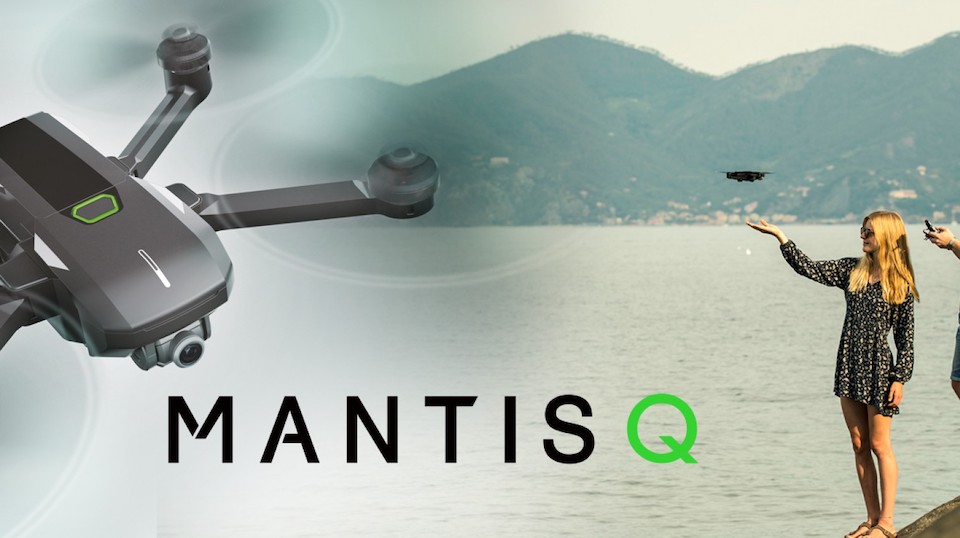 Yuneec Mantis Q Review – Is it worth getting? Read this before you buy

by Joseph Flynt
Posted on January 4, 2019
29 Shares
3D Insider is ad supported and earns money from clicks, commissions from sales, and other ways.

If there was a list of brands that could rival the mighty DJI in the field of professional and consumer drones, then Yuneec would be near the top of the list, if not the top name. Their Typhoon series of six-rotor enterprise-grade drones have catapulted them into popularity, especially in the field of drone photography.

With the quality of the drones they have released in the past, Yuneec riled up a lot of anticipation when they announced their entry into the ultra-portable drone market – the Yuneec Mantis Q. How does this drone measure up to the heavyweights of the ultra-portable world, namely the Mavic drones? Read on for out detailed analysis

True to keeping up with the trend of ultra-portable drones, the Mantis Q comes with arms and propellers that fold inward. Folded down, the Mantis Q measures only slightly larger than the Mavic Air. At only 480 g, the Mantis Q is among the lightest of the popular foldable drones. Yuneec took the principle of ultra-portability one step further and implemented the same design on the remote controller, which features control sticks that fold inward. The two tidy, compact blocks can easily fit into any backpack.

The Mantis Q appears to be made of a combination of plastic and metal which keeps it durable despite being lightweight. The build does not feel or look as robust as the Mavic Pro, but it also does not feel flimsy.  All in all, the Mantis Q is a great-looking drone with a sleek design that also feels sufficiently sturdy and rugged.

The Mantis Q does not have any built-in storage capabilities but instead has a microSD card slot on its side. The drone bundle comes included with a 16GB microSD card which should be enough to store around 40 minutes of 4K video or up to 100 minutes of 1080p video. You are always welcome to upgrade to a higher capacity microSD card should you need it or carry around a couple of extra microSD cards.

If you want to transfer your files without having to eject the microSD card, the Mantis Q has a USB-C port for transfer via data cable.

The Mantis Q features a camera with a 1/3.06” CMOS sensor which can capture 12.9 MP stills and 4K video at 30 fps. The size of the camera sensor is quite underwhelming, as it is even smaller than the camera sensors of most flagship smartphones. This also means that the drone’s camera struggles under low lighting. In fact, stills taken under low light conditions have such poor resolution to be rendered almost unusable. Even pictures taken in broad daylight do not have exceptional quality, as they still come out a little grainier than expected.

Operating the camera is simple enough with automatic focus and white balance features. For more technically-inclined photographers, you also have the option of adjusting these settings manually.

The camera of the Mantis Q is supported by a two-axis gimbal. It has a pitch range that goes from -90 to +20 degrees, which is admittedly an impressive motion range. When panning vertically, the gimbal automatically stops at the 0-degree position, which makes it easier find the center horizon.

However, the exceptional pitch range of the Mantis Q is defeated by its biggest oversight – the lack of any mechanical stabilization. When capturing 4K videos, the camera does not stabilize the footage with the horizon. With all the vibrations and drifting that the drone goes through, the lack of any stabilization makes 4K videos virtually unusable beyond just personal use.

The Mantis Q somewhat addresses this problem by providing electronic stabilization for videos captured at 1080p. However, it is no replacement to true mechanical stabilization, as the stabilized video is still wobbly. Put simply, using the Mantis Q for professional drone photography would probably be a very poor decision.

The quality of camera is one of the most important features of a drone, which makes the compromises taken by Yuneec with the camera of the Mantis Q especially disappointing. The photos and videos are fine for personal enjoyment, but you are not likely to wow any audience with them.

The Mantis Q comes with a simple remote controller that sticks to a minimalist and classic design. It has 2 control sticks for responsive control of drone flight. It has one-button return-to-home function, as well as separate physical buttons to capture an image or to start recording video. It also has a physical switch to toggle between Normal and Sport modes, as well as control wheels for the camera tilt and image brightness.

All other controls are done via the Yuneec Pilot mobile app, which is available for both Android and iOS. The interface of the mobile app is also very easy to understand, perhaps even more so than its DJI counterpart. The simplicity of controls comes at the price of versatility – it does come with as many functions as more sophisticated drones.

The remote controller has a 3000mAh battery which can be charged using the controller’s USB-C port. The battery lasts for more than 6 battery cycles of the Mantis Q drone, so you should not find yourself having to charge the remote controller in the middle of a long flying session.

The Mantis Q has two flight modes: Angle mode and Sport mode. In Angle mode, it can move at a somewhat standard maximum speed of 14 mph. Shifting to Sport mode amps up this maximum speed to a very impressive 45 mph. Considering the lack of any obstacle avoidance technology, this is a mode that is reserved for experience drone pilots, or only for flying in large open fields. At this speed, the Mantis Q becomes one of the fastest quadcopters available today.

As we have mentioned, the lack of a stabilizing gimbal really hurts the Mantis Q. Video captured at the lower maximum speed of 14 mph is already very wobbly, which means video capture at Sport mode is practically out of the question.

The control range of the Mantis Q is just a little short of a mile, which is at par with most drones in the same price range. It is equipped with GPS and GLONASS tracking technology which aids some of its functions, such as its Journey flight mode or its return-to-home feature.

Perhaps because of the deficiency of sensors, the Mantis Q cannot hold a stable hover very well. In moderately strong wind, the Mantis Q bounces around up to 3 feet in both the vertical and horizontal directions. This can be especially problematic when flying near obstacles, or at low altitude. The inability to hold a stable hover further highlights the absence of a stabilizing gimbal, as it makes it even harder to capture videos that are not shaky.

The Mantis Q drone ha a removable 2800mAh Li-Po battery. According to Yuneec, this battery can support flight of up to 33 minutes when moving at a steady 14 mph. Under heavy wind and with camera operations, this number will likely decrease to around 25 to 28 minutes. This is a very good figure considering how small and light the Mantis Q is. In fact, the flight time of the similarly-priced Spark is only about half of the Mantis Q.

Although the drone has an USB-C port, this cannot be used to charge the drone’s battery while it is installed. Instead, the battery needs to be charged using the external AC charger that comes with the drone. The external charger can fit up to 3 batteries simultaneously, although the drone itself does not come with extra batteries. If you are planning to buy extra batteries for your Mantis Q, the good news is that they are very reasonably priced.

The Mantis Q has a couple of nice tricks under its belt when it comes to autonomous flight and camera modes. It has all the usual flight modes such as Journey, Tracking (which uses face detection), and Points of Interest. Like the Spark, it also features Gesture controls, such as waving a hand to capture a drone selfie.

A somewhat unique feature of the Mantis Q is its ability to receive voice commands. Using the microphone of the smartphone tethered to the controller, verbal commands such as “take a selfie” or “record a video” are recognized by the drone. While this is certainly an amusing feature, it also feels a bit too gimmicky. Most of the functions accessible via verbal commands can also be done with a few button-presses in the controller, so you’re not exactly saving much time.

All in all, we have mixed feelings about the Mantis Q. It has a couple of nice features and certainly succeeds in maintaining a lightweight and compact design. It also has excellent battery life, an intuitive remote controller, and all the autonomous flight modes that most users are looking for. However, it makes too many compromises in camera quality. The absence of mechanical stabilization and obstacle avoidance technology also really hurts out impression of the Mantis Q.

Ultimately, we must answer the question: is the Yuneec Mantis Q worth it? The Mantis Q has a couple of things going for it, such as its excellent battery life and a price tag that is lower than any of the Mavic drones. If we are comparing within similar prices, then the Mantis Q is better compared with the DJI Spark or the Parrot Anafi. Below is the summary of our side-by-side comparison:

Based on our comparison matrix, the Mantis Q is easily the heaviest of the three. However, it also has the longest flight time and the highest maximum speed. In terms of camera quality, the Parrot Anafi stands out with its 1/2.4” CMOS sensor and ability to capture 21 MP stills. However, the DJI Spark also stands out as being the only model with an obstacle avoidance system. The lack of gimbal stabilization of the Mantis Q also stands out like a sore thumb.

Each one of the drones in this selection has their own strengths, which keeps the Mantis Q competitive. If you want to be able to fly longer, then the Mantis Q is the obvious choice. However, its poor camera quality means it is not the best choice for high altitude or high-speed photography.

The Mantis Q is a serviceable drone which can stand toe-to-toe with other drones in the same price range. Considering the popularity of the DJI Spark, the Mantis Q (as well as the Parrot Anafi) have come out as worth rivals in the budget ultra-portable drone market.

If you absolutely need to stick to this budget, then the Mantis Q is hardly a purchase that you will regret. However, if you can spare a few hundred dollars more, we recommend getting the DJI Mavic Air. It’s only slightly more expensive, but has a vastly superior camera, gimbal, and obstacle avoidance system.