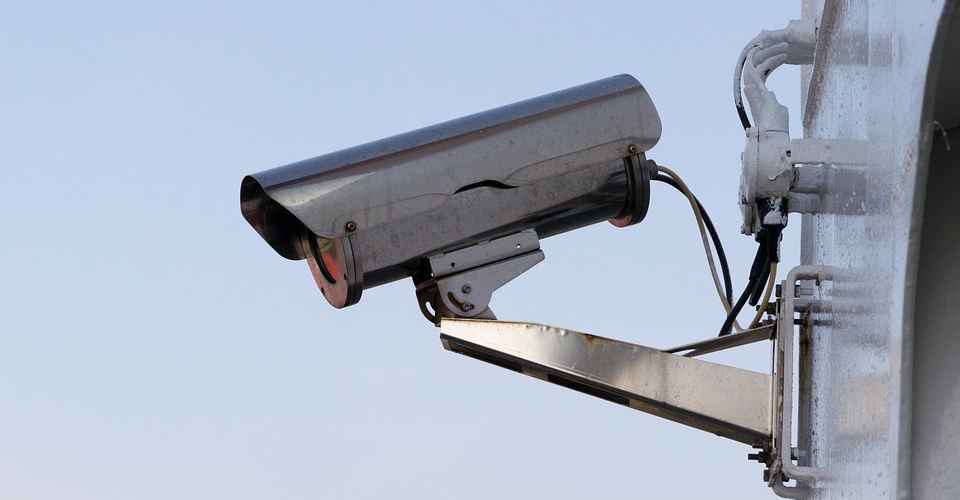 Fake Security Cameras: Why You Should Have Them and the Best Models Available

by Joseph Flynt
Posted on August 8, 2019
27 Shares
3D Insider is ad supported and earns money from clicks and other ways.
DJI has just released the Mavic Air 2. See all of the specs here.

There’s no question that real security cameras are valuable for any business setting. They provide round-the-clock surveillance and can aid in investigation should an untoward incident happen. However, the very presence of security cameras is enough to deter crime, even before they happen. From this concept was borne the idea of using fake security cameras, one of the prime examples of security theater.

Security theater refers to the use of countermeasures that convey a sense of security without actually improving security. There are two sides to why it’s still used, even until today. The first is that fearmongering is very counter-productive. A populace that feels secure is happier and generally more productive. The second is that the mere fact that there is an illusion of security can be enough to deter many crimes, including most of the petty ones like theft and vandalism.

That being said, security theater is not effective in all situations. Having a false sense of security could mean that people will let their guard down and not be vigilant of their surroundings. If an actual crime does happen, fake security cameras will be absolutely no use. In fact, there have been a lot of lawsuits that involves the failure to capture videos of an actual crime because of the use of fake security cameras.

So, the question remains: should you be using fake cameras? As many security experts put it, security theater is no replacement for actual security. You can use fake cameras but only to augment an actual, working security camera system. If you’re setting up a security system for a large office or warehouse, a few fake cameras can extend the scope of the system at a very low cost. Of course, using purely fake cameras is just asking for trouble.

What should you look for in a fake security camera?

Since they don’t actually record any footage, you would likely forget to do any maintenance for a fake security camera. Thus, a low maintenance model – one that hardly requires a battery replacement – would be much more preferable. 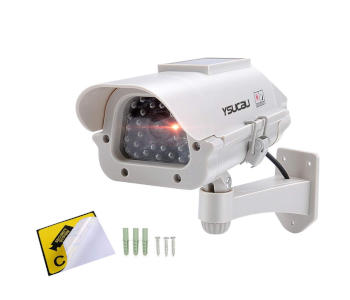 Our top pick is the YSUCAU Fake Dummy Camera, primarily because of the fact that it’s solar-powered. It still offers the option of installing batteries as a backup power in case of extended cloudy or rainy days, but we really like the appeal of a zero-maintenance, solar-powered fake security camera.

Better yet, you can install rechargeable batteries which will be recharged by the solar panel. If you’re looking for a fake security camera that you can install and forget about, then the YSUCAU is definitely what you need.

Since this fake camera relies on solar power, it is best installed outdoors. The design of the YSUCAU is excellent and fits in really well with an outdoor environment. The camera looks very professional and we’re sure that most people wouldn’t be able to tell that it’s a fake. The YSUCAU has a single red LED light that continuously blinks, calling attention to itself and making sure that all would-be intruders or miscreants would feel like they are being watched.

The sole downside of the YSUCAU solar-powered fake camera is that it’s significantly more expensive than all the other entries in this list. At about double the price, anyone might think twice about spending so much for a fake camera. If you have the budget, then the YSUCAU is certainly one of the best and most convenient fake camera options. 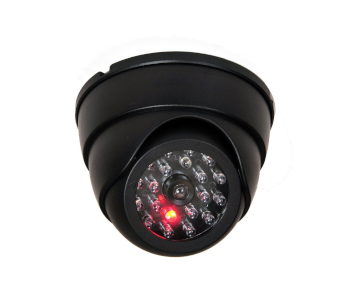 For the best bang for your buck, our pick is this four-pack of dummy CCTV cameras from VideoSecu. The design for these cameras simulates those that you would normally see in the supermarket, making them excellent dummies for indoor spaces. Just about everyone knows what these cameras are supposed to look like, which makes them even more effective as a crime deterrent.

Furthering the illusion is a single red LED that is supposed to act as IR illumination and a couple of flashing warning lights. If you don’t want to bother with having to replace the batteries for a fake camera, then you can opt out of the warning lights. It’s really not such a big deal since not many security cameras have actual flashing lights.

The plastic housing of the camera feels solid, and the camera’s overall design looks clean and professional. From afar, it’s very hard to tell this fake camera apart from the real thing. The dome design for the camera is also great for giving the illusion that the camera has a large field of view – much better than a directional bullet camera, at least.

Since all it takes to mount this VideoSecu fake camera is some double-sided mounting tape, you can position it practically anywhere.
If you think you’ll be satisfied with these cameras, then we highly recommend the four-pack since it’s much cheaper. It’s affordable, easy to install, and looks real. What more can you ask for? 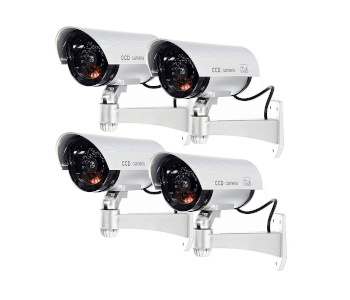 If you’re on a really tight budget, then this four-pack of fake security cameras from Masione is a pretty good deal at just a little over $20. These cameras look real enough from afar, but a closer look at them can potentially ruin the illusion. If you’ll be using the Masione fake cameras, we recommend mounting them somewhere relatively inaccessible so that strangers won’t be able to look at them closely.

The Maisone fake cameras offer an option to install two AA batteries, which will power a blinking red LED. This can help keep the cameras visible at night or give the illusion of IR lighting. If the red LED isn’t your thing or you don’t want to bother with replacing the batteries of the fake camera, then you can just not use the feature.

The design of the cameras is bullet-type and mounting them involves installing screws on the included brackets. For some reason, the designers of this fake camera chose to have the wires of routed through the brackets – something that’s problematic because real security cameras don’t work that way. Equally problematic is the fact that the cameras have a prominent “CCD Camera” label on the sides, and it only takes a cursory Google search to figure out that it’s a fake camera based on that label.

You might save up quite a bit with the Masion 4-pack fake security camera, but you’ll probably have to do some DIY modification to make them look realistic. If you’ve got the stuff lying around and you’re up to it, then why not? No dollar amount is too small if you’re a penny-pincher. 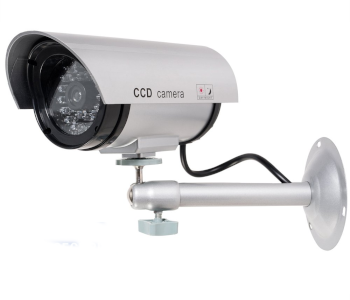 The bullet-style WALI dummy surveillance camera is one of the most popular and best-selling, no doubt because it’s also one of the cheapest. The look of the WALI dummy camera is awfully familiar to anyone, making it very versatile for use in your front yard, garage, warehouse, office, or storefront. It does need to be screwed onto a surface to be mounted, but the package helpfully provides all the screws that you’re going to need.

The build of this dummy surveillance camera from the camera body to the mounting bracket. It even has a great-looking anodized aluminum casing that makes the camera look professional while also protecting it from outdoor elements. By installing two AA batteries, you can activate the blinking red LED light that helps keep the camera visible in the dark.

One thing we really like about this camera is the fully adjustable tilt and rotation of the mount, which allows you to point the camera at any direction. If you have a functioning security camera system, this is the perfect complement that gives the appearance of a wider security coverage.

The camera comes with a small decal that says “24-Hour Security Camera.” We think it looks quite cheesy, but you’re free to use it if you want. All in all, this is great, low-cost solution to augmenting your existing security camera network. 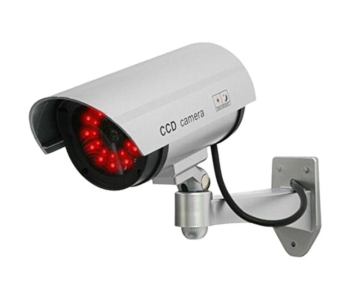 Even with such an array of LED lights, a single pair of AA batteries can last anywhere between 9 to 12 months, so you won’t need to worry about changing them out frequently. Even without the lights, though, the UniquExceptional looks very realistic. You might want to do away with the single thick cable that runs from the camera since most real security cameras utilize two thinner cables.

The fully adjustable mounting bracket allows you to point the fake camera in any direction, while a silver-colored rain guard completes the look. If you need your fake camera to be very visible at night, then the UniquExcpetional brand is the way to go. 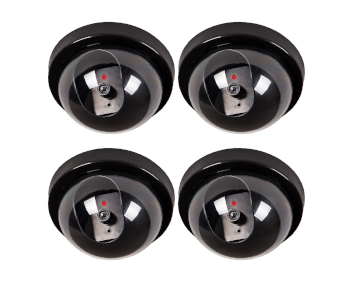 Another of the best-selling fake security cameras nowadays, this fake CCTV dome camera from WALI gives off a sleek and intimidating vibe with its professional-looking and low-profile design. While not the type to be typically weather-proof, these dome cameras will fit right into your front porch, storefront, office space, or warehouse.

These fake cameras also have a blinking red LED light which helps keep them highly visible. You will need to install a pair of AA batteries for the LED light. The top surfaces of the dome cameras have two mounting holes where you can slide in a pair of screwheads. The “camera” inside the dome cannot be panned or tilted, so you’ll have to position them carefully during mounting as they are more or less permanently fixed. The cameras also come with a security warning decal.

What makes the WALI dome camera effective is the fact there are hardly any internal mechanisms of the camera that are visible from afar. This sense of ambiguity may be more effective as a deterrent than any sophisticated security camera design. It also helps that the WALI dummy cameras are ridiculously cheap – about $15 for a four-pack. If you’re just curious if a fake security camera will work for your situation, then this is a very affordable and non-committal option.

Fake security cameras may be an effective crime deterrent, but they should never be considered a replacement for the real thing. As we’ve already mentioned, there may be some harm in implementing a completely fake security system. While the products we have listed here look good enough to be real, they should always be complemented by actual security cameras with 24-hour surveillance. After all, when an actual crime does happen, the investment you make towards real security cameras will turn out to be worthwhile.