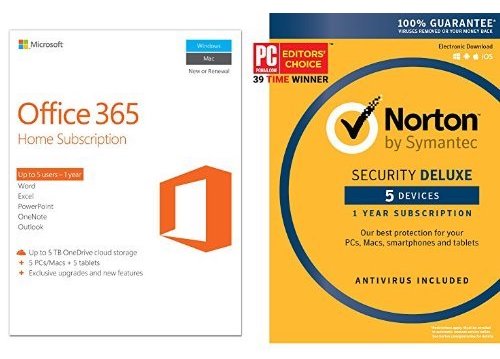 by Amada Pearson
Posted on November 25, 2017
16 Shares
3D Insider is ad supported and earns money from clicks and other ways.

One of the best and often overlooked part of Black Friday is Amazon’s ‘Deal of the Day’. As part of this, Amazon releases big discounts on products by partnering up with companies for one day only.

Today Amazon has released a bundle deal for Microsoft Office 365 and Norton Antivirus. The deal gives you a one-year subscription to both programs for just $80. You can install the programs on up to 5 computers.

Office 365 comes with the full installations of Word, Excel, PowerPoint, and Outlook. PC users will get Publisher, Access, and Onenote added on top. Microsoft is also giving users 60 minutes of Skype calls each month and 1 TB of OneDrive cloud storage for up to 5 users.

Norton Antivirus will keep your computers up-to-date to defend against malware, spyware, and unsafe websites. It will also guard your identity and online transactions.

Amazon has the price for Norton listed at $80 by itself. Office 365 Home Subscription which allows for five users like the one in the bundle deal has a retail price of $85. This means that today’s one day deal could save you around 50% from the retail price.

Amazon’s bundle deal of the software will expire at midnight tonight. Now is your chance to get either of these for a discount if you need a new subscription.

Amada Pearson
I've always been interested in tech and I've been writing about it for 6 years. I love reporting on what is new and sharing it with you.
0 comments
Share now:
16 Shares
YOU MAY ALSO LIKE
SEE MORE