by Joseph Flynt
Posted on November 11, 2018
17 Shares
3D Insider is ad supported and earns money from clicks, commissions from sales, and other ways. 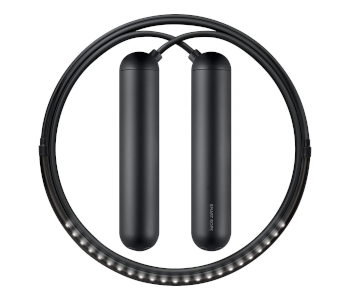 After home automation, fitness is the niche that’s seen the greatest impact and benefit from the smart gadget boom. Fitness trackers tell us how many steps we’ve taken and many of us dread what our smart scale will say the morning after a fancy dinner. There aren’t many smart fitness gadgets out there yet that are more directly involved in one’s exercise routine though, and Tangram’s Smart Rope may be the innovation to pave the way for other proactive products.

The Korean company touts it as both a fitness and motivational tool. The rope’s main draw is its ability to display a jump counter while you’re skipping. This combined with a socially-minded app is supposed to get you to push yourself and achieve ever loftier fitness goals.

You can find the Tangram Smart Rope at Apple stores around the world, but does it live up to the hype? Let’s find out.

The Smart Rope is thicker than standard ropes and takes some getting used to. The added thickness is due to 23 white LEDs spaced out along the middle. These LEDs glow each time you jump, adjusting their intensity and on/off status mid-jump to produce a 3-digit jump counter while the rope is moving downwards. This works regardless of your rhythm’s consistency as built-in sensors adjust the LED pattern based on the rope’s current speed. Only consecutive jumps are recorded and the count resets itself if the rope is idle for a short while

The contents of the Smart Rope’s box are sparse – you get the rope itself along with documentation that explains how to use it and the Smart Gym companion app. A rechargeable battery is built into one of the handles and lasts for 48 hours of skipping. You charge it via micro USB cable but don’t get one with your purchase.

Smart Gym is a stylish, minimalistic app that keeps track of your skipping sessions. You need to put in your height, weight, daily activity levels, & age when starting out and the app will generate a recommended daily jump count. Sticking to a routine will eventually unlock achievements and harder challenges for you to master.

The app displays your progress over time in a graph. It can sync with Apple Health to give you an estimate of how many calories you’ve burned. A social community aspect is also present – there are daily leaderboards and competitions you can enter to test yourself against other Smart Rope users worldwide or challenge friends and see who can skip the most.

The Smart Rope feels a little heavy and clunky due to its thicker cord. The handles are ergonomic, come in three colors, and can be replaced by silicone alternatives for an even better grip. Skipping starts to feel more natural quickly, especially if you do it barefoot or in ordinary sneakers.

The rope falls flat when it comes to its main selling point though. It’s hard to make out the LED score and you have to be looking up or down for best visibility. Speaking of which, the lights are dim and completely invisible in the sunshine or a well-lit gym. You’ll want to use the Smart Rope in gloomy surroundings for best results.

This is the only smart jump rope to date. The LED version goes for around $80, but there’s also a plain version called Smart Rope Pure that costs $20 less. It doesn’t have LEDs, but the app is the same.

Tangram has announced that LED functionality will receive improvements soon. Apart from the jump count, the LEDs will be able to track burned calories and how much more you need to skip to fill the daily quota once a firmware update is released.

The Smart Rope, like any pioneering innovation, is a good idea on paper but lacks refinement in its current state. An improved version with a slimmer rope and brighter LEDs would gain our instant recommendation. As it stands, the Pure might be a better choice since you’re getting the same excellent app experience and motivational approach to fitness at a lower price.